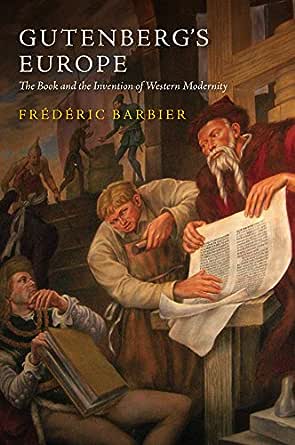 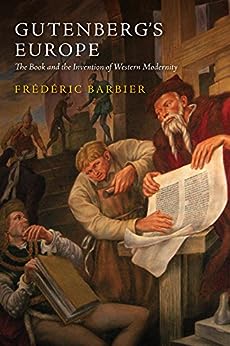 Major transformations in society are always accompanied by parallel transformations in systems of social communication – what we call the media. In this book, historian Frédéric Barbier provides an important new economic, political and social analysis of the first great 'media revolution' in the West: Gutenberg's invention of the printing press in the mid fifteenth century. In great detail and with a wealth of historical evidence, Barbier charts the developments in manuscript culture in the twelfth and thirteenth centuries, and shows how the steadily increasing need for written documents initiated the processes of change which culminated with Gutenberg. The fifteenth century is presented as the 'age of start-ups' when investment and research into technologies that were new at the time, including the printing press, flourished.

Tracing the developments through the sixteenth century, Barbier analyses the principal features of this first media revolution: the growth of technology, the organization of the modern literary sector, the development of surveillance and censorship and the invention of the process of 'mediatization'. He offers a rich variety of examples from cities all over Europe, as well as looking at the evolution of print media in China and Korea.

This insightful re-interpretation of the Gutenberg revolution also looks beyond the specific historical context to draw connections between the advent of print in the Rhine Valley ('paper valley') and our own modern digital revolution. It will be of great interest to students and scholars of early modern history, of literature and the media, and will appeal to anyone interested in what remains one of the greatest cultural revolutions of all time.

"Combining meticulous scholarship with persuasive comparisons between the print and the digital revolutions, Frédéric Barbier has made the most important contribution to the field since Elizabeth Eisenstein's The Printing Press as an Agent of Change."
Peter Burke, Cambridge University

"The great strength of this book is that it roots Gutenberg's invention so firmly in the mediaeval craft society from which it emerged. Gutenberg was able to draw on a range of pre-existing techniques and developing markets; without these transformations, so meticulously explored here, the print revolution might have been still-born."
Andrew Pettegree, St. Andrews University
商品の説明をすべて表示する

mirasreviews
5つ星のうち4.0 The Innovations That Created –and Were Created by- The First Media Revolution.
2017年9月5日 - (Amazon.com)
Vine先取りプログラムメンバーのカスタマーレビュー( 詳細 )
"Gutenberg's Europe" was written by French historian Frédéric Barbier, who specializes in the history of the book and related topics. Here he examines the role of the printing press in the creation of Western modernity. He concludes that "in the space of three generations the social communication systems of Western societies had experienced an unprecedented transformation: typography with movable characters had everywhere prevailed, an entire new economic sector had emerged, new reading practices had been generalized and the categories of intellectual representation itself had been redefined." But how did this happen? Barbier takes the reader through the process in three parts: "Gutenberg Before Gutenberg" lays out the preconditions for the media revolution. "The Age of Start-Ups" describes the innovations that occurred in the mid-15th century. "The First Media Revolution" talks about the consequences in the late 15th and 16th centuries.

Barbier describes the growth of urban centers beginning in the 11th century, the creation of the bourgeoisie, the growth of universities, schools, and libraries, and where books fit into this picture, as literacy and reading permeated urban society. As much of the popularity of manuscripts, and later the printed book, depended upon its economics, Barbier returns often to the growth of the book trade, including what is known of the history of booksellers and craftsmen. Having presented the social and economic conditions that created a book trade, Barbier moves into "the age of start-ups," in which inventors, technicians, and financiers created a revolution in human communication. He goes details the technological innovations that were necessary, before he follows Johannes Gutenberg from Mainz, Germany to Strasbourg and back to Mainz in 1449, where he opens a print shop with Johann Fust and takes on the grand project of printing a 42-line Bible.

The Gutenberg Bible, "the first great European book", was printed around 1455 in two volumes. All 180 copies were pre-sold. This event is followed by a discussion of the innovations in process of manufacture and in organization that were necessary to a successful print run and printing business. This includes the invention of editorial policy and eventually the financial innovation to create vertically-integrated businesses. As books were increasingly commodified, "there were major consequences for the economy of intellectual consumption and production." The book's last part, "The First Media Revolution", contains the discussion implied by the book's title. Invented in the Rhine Valley and driven by market dynamics, printing spread in concentric circles across Western Europe and beyond. "Printing was modernity, and the geography of printing was the geography of a modernity whose space was conflated with that of Western Europe."

After the discussion of where and how printing spread, Barbier turns to "the nature of the text": page layout, choice of typography, internal organization of the text, punctuation, capitalization, sequentialization, paragraphs, diacritical marks, etc. This section is more theoretical than the rest of the book, as Barbier discusses coding and theories of communication as they pertain to books. The media explosion is evident in the whopping 300,000-400,000 titles printed in the 16th century, amounting to hundreds of millions of volumes. Religion as a subject matter was dwarfed by belle letters, classics, rhetoric, and grammars. Beyond making it impossible to control the distribution of information, a quandary with many consequences, printing played a large role in encouraging scientific thinking, in the Reformation, and it allowed for the invention of propaganda, censorship, and publicity, all of which shaped the modern world and continue to shape our daily lives.

"Gutenberg's Europe" seems to have been written for an academic audience. It is dense and probably more technical about the materials and innovations necessary to construct movable type than a book written for a general audience would be. I was surprised by the space dedicated to the details of many innovations that preceded the printing press, as I was expecting the book to be more about the consequences. I was expecting more of what is in Part III. But Frédéric Barbier is a historian of books specifically, and he knows a lot about their production, how they communicate, how and why they spread through Europe and beyond, so he passes that on to the reader. Ironically, this makes the actual invention of movable type the most tedious part of the book. But there is a lot of interesting information here, and Barbier has made me think about commodification in the Middle Ages, which is something I hadn't previously thought much about before the 16th century.
続きを読む
レビュー を日本語に翻訳する

Always be aware of your surroundings.
5つ星のうち4.0 A massive and noteworthy effort to document Gutenberg and "modern" movable type printing.
2017年3月5日 - (Amazon.com)
Vine先取りプログラムメンバーのカスタマーレビュー( 詳細 )
I admit freely that I had to give up on the majority of this book. It is an impressive scholarly effort about the history of Gutenberg and the advent of the modern printing press. It is written a bit too much over my head. I don't consider myself to be a slouch - I am a book collector and former book seller, but this is the history of printing on a level much higher than I aspire to achieve. Those dedicated to the subject will appreciate the extensive research and meticulous notations of works cited. It addresses social, political and financial aspects of the time as well as the history of materials used - such as an extensive treatment regarding the production of pulp/paper.
続きを読む
1人のお客様がこれが役に立ったと考えています
レビュー を日本語に翻訳する

takingadayoff
5つ星のうち4.0 The Revolution of the Book
2017年2月23日 - (Amazon.com)
Vine先取りプログラムメンバーのカスタマーレビュー( 詳細 )
Get ready for a long, deep, complex, and downright philosophical look at how the Book changed the world. Frederic Barbier goes into the history of the printed word as well as the context in which the two major revolutions of print have taken place. He identifies the printing press as the first revolution of the written word, when the Gutenberg press made printing books easier than writing out every book by hand. But even with Gutenberg, books did not become a commonplace for most people. It took the revolution of the mass printing of the Industrial Revolution to engineer that change -- books for everyone! Barbier sets these world changing events in their place by considering the causes and effects, other issues such as universal literacy and reading for entertainment, increased leisure time, and more. It's a social history within a philosophical examination. And more.
続きを読む
レビュー を日本語に翻訳する

John D. Cofield
5つ星のうち5.0 An Invention And Its Aftermath
2017年1月7日 - (Amazon.com)
Vine先取りプログラムメンバーのカスタマーレビュー( 詳細 )
Few inventions have had as immediate, vast, and far reaching effects as the European invention of the printing press by Johann Gutenberg in the 15th century. Frederic Barbier is a renowned French scholar, and this book was originally published in that language. The English translation is smooth and approachable. While this is an academic and erudite work, it is certainly accessible to non-specialists who have an interest in European history.

Barbier begins with an overview of the European world of the fifteenth century, in which rising population (after the severe decline caused by the Black Death in the mid 1300s), growing cities, reviving trade, and increasing literacy meant that the traditional method of producing books by hand copying could no longer keep up with demand. Barbier describes Gutenberg's life as it can be traced through the available records, and then deals with the impact of his great invention. This is a work of European history, and thus Barbier spends relatively little time tracing the antecedents of printing in China and India, though he does go into some detail over the development of Chinese xlography.

Gutenberg's press and the resulting explosion of printed books and other records irrevocably altered European society. The first book printed was the Latin Bible, and religious works dominated the new field for much of its first century, but more secular developments like double entry accounting were quick to develop as well. Barbier provides some fascinating accounts of some of the early printers and their achievements, along with some beautiful reproductions of pages from printed books and pamphlets. The book is replete with charts and graphs as well.

It is no exaggeration to proclaim that Gutenberg's invention changed Europe and the world forever, and that our modern world directly descends from the activity of an obscure tinkerer in the small German town of Mainz.
続きを読む
1人のお客様がこれが役に立ったと考えています
レビュー を日本語に翻訳する
Amazon.comのカスタマーレビューを見る(6) 5つ星のうち4.5
click to open popover
Amazonプライム会員ならお急ぎ便、日時指定便が使い放題
さらに、映画もTV番組も見放題。200万曲が聴き放題 。クラウドに好きなだけ写真も保存可能。
> プライムを無料で試す