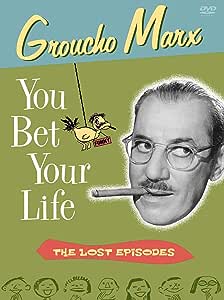 With 18 shows that remained unseen since their original broadcasts in the 1950s, You Bet Your Life: The Lost Episodes offers another welcome example of the way DVDs are preserving our precious television heritage. Of course, this long-running game show (1950-61) was barely a game show at all. Instead, it was a perfect showcase for the wit and whimsy of Groucho Marx (1890-1977), who clearly relished the third major chapter (after stage and movies) of his illustrious career. With his mischievously elevated eyebrows and ever-present cigar, the great comedian was right at home with average and above-average civilians, recruited from the studio audience in offbeat pairs to answer quiz questions and win typically modest sums of cash. "Say the secret word and split a hundred dollars," said Groucho as each contest commenced, and a mangy stuffed duck named Julius (Groucho's real name) would drop from the rafters to reveal the secret word.

While there was a modicum of preparation before these shows were filmed, most of Groucho's one-liners and snappy comebacks are impressively off-the-cuff, hilariously demonstrating the mastery of humor that Groucho--still vital in his well-heeled sixties--had honed over decades of live performance. His frequently nervous contestants are equally amusing, sometimes giving as well as they got from their rapier-witted host. They are also occasionally exceptional: professional baseball umpires; super-athlete Bob Matthias; a decorated Korean War hero; a Mr. And Miss Universe; a celebrated mystery writer; TV comedian Ernie Kovacs; British "hipster" comic Lord Buckley; and even Gary Cooper's mother appear as contestants. With a revealing glimpse of '50s popular culture, these well-produced DVDs also include a wealth of You Bet Your Life artifacts: the "stag reels" showcase Groucho's deft handling of "mature humor" edited from the original broadcasts; a behind-the-scenes film reveals the show's inner workings and primary staff; and ads for Plymouth/DeSoto dealers (the show's sole sponsor) are quaintly charming by latter-day standards. Best of all, Groucho's original radio audition is included, along with a priceless 10-minute radio clip featuring Groucho and Bob Hope--a comedy gem that led to Groucho's long-term employment on television. For Marx Brothers and Groucho fans, this is a treasure trove of smile-inducing nostalgia. --Jeff Shannon

The Lost Episodes is a deluxe 3 DVD Box that includes 18 episodes, 6 episodes per disc with each episode running 25 minutes, a 20 page booklet with an outstanding essay by Groucho expert Robert S. Bader, plus loads of rare You Bet Your Life memorabilia and photos. These shows are officially licensed from the Groucho Marx estate and NBC, and have been produced from the original film reels found at the UCLA film archive and the Library of Congress. These episodes have not been seen since their original run in the early 50's. They were never repackaged for syndication by NBC for various reasons. Includes out takes from the episodes on every disc and a 17 minute film made for DeSoto dealers called The Making of You Bet Your Life included as an extra.In addition to the episodes, the box set includes a treasure trove of original and rare Groucho gems, including his 1947 audition for the original You Bet Your Life radio program! Other rarities included as DVD extras: Groucho's 1947 audition for the original radio show; a promotional recording Groucho made as a Christmas gift to DeSoto dealers; Some original commercials

Groucho Marx is arguably the most famous, iconic comedian of all-time. It's funny to think that for all the great films and stage appearances he made throughout his career both in the Marx Brothers act and solo, Groucho seemed to prefer this modestly-produced TV series above all others. Groucho was the emcee and star of this filmed quiz show and though it was ostensibly a game show, the series' most important asset was the humor injected by Groucho into the interviews he did with the contestants You Bet Your Life ran on television from October 5, 1950 - June 29, 1961 (423 episodes), one of the longest running shows in the history of television. (There were also 105 episodes that aired exclusively on radio.) The program was renamed The Groucho Show during its last season and has been seen in syndication as The Best Of Groucho for the last 40 years.