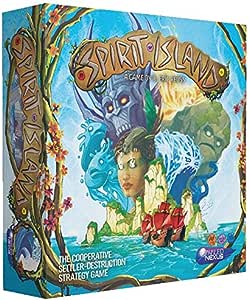 M. Pureka
5つ星のうち5.0 Amazing game for people who like its style
2017年7月29日 - (Amazon.com)
スタイル名: ベース
I have three games of this under my belt now, and a fair amount of exploring and thinking. This game has been a hit with everyone I have shared it with, but it's not for everyone. That said, I am a pretty discerning boardgame player - I tend to be ambivalent to the great majority of them - and Spirit Island is far and away my favorite.

You will probably deeply enjoy Spirit Island if:
* You like boardgames of high-moderate complexity (somewhere in the ballpark of Terra Mystica or War of the Ring) - there is a lot going on in Spirit Island, and part of what makes it good is this depth.
* You dislike high levels of randomness in your game. Spirit Island keeps the randomness to pretty much the minimum for still allowing surprise - the base game only has randomness in which terrain the invaders act in next, which powers you get to choose from when you gain a new power (Draw 4, pick 1) and the effects of Fear cards. The expansion actually adds some additional randomness in the form of event cards to make it harder for expert players to plan too far ahead.
* You like cooperative games, but don't like it when one player tells everyone else what to do. Spirit Island avoids this problem by making decision making sufficiently complex that it's difficult for any one player to track the entire suite of options for the other players, and by making players act simultaneously, so that everyone is always engaged with their own options instead of all staring at the one player whose turn it is. Cooperation tends to be more along the lines of "I can handle these guys over here, can anyone do anything about the city over there?" and "Can anyone move these guys out of here?" than "Okay Dave, you need to move here, and do this thing."
* You don't like waiting for other people to take their turns. Since play is more or less simultaneous, waiting is kept to a minimum - even if you have one player who wants to ponder their options much longer than everyone else, this will usually influence your own choices and lead to collaborative discussion.
* You like a lot of variety and replayability. Out of the box, the game contains eight different spirits, all of which play radically different from each other - not a simple "You get +1 X when doing Y, and +2 Q on terrain R" sort of differentiation. It also contains three Adversaries that modify how the invaders behave in different ways, and several other ways to customize the game experience once you are familiar with it, both in terms of difficulty and just in terms of changing up how things work. There's even an alternative map on the back of the main map boards.

You will probably not like this game if:
* You prefer lighter games. If Settlers of Catan is your sweet spot for complexity, Spirit Island may make you feel overwhelmed.
* You don't like trying to suss out complicated situations or plan ahead; There's a lot going on on the board, with lots of pieces and a three step invader turn modifying that state heavily even outside of any player actions.
* You want 100% group consensus on all actions in a cooperative game - trying to play Spirit Island this way will take a very long time and probably feel like "work"
* You don't like co-op games at all, ever.

Other notes:
* This game is beautiful, all the art is really nice and evocative. It also has a pretty strong theme, especially for a "Euro-style" game.
* The components are all really nice and solid. The cards are sturdy, the boards are satisfyingly heavy, and the pieces are nicely made. The "explorer" pieces, in spite of being thin, do not feel fragile.
* The box inserts are super well done and actually hold all the things. (Though they won't hold the expansion, should you choose to get it.)

Disclaimer: I received this by backing the Kickstarter, hence the lack of "Verifier Purchaser"

However, I got it a couple weeks back and it has made it to the table a lot since then. I played it a couple times solo to get a feel for it as I like to understand a game before trying to introduce others to it to fumble through. I only intended to play a round or two solo and started by trying to play two spirits and just go through the motions for two characters at once (not a great idea as I found out especially first time), then tried it on its "solo" mode and after a couple rounds of that ended up playing a full game through because it was pretty fun as a solo game. Only other game I have actually actively played solo is Mage Knight so that was a bit of a surprise there. Probably would not buy it for that reason, but I think it is somehting I could see doing from time to time if it isn't getting on the table much at some point.

I then played it with my wife, who really liked the game and immediately asked about when we could find a way on the table again, and she has brought up playing it a couple times since then. I have had a few different friends I have played with and all have made a repeat showing for the game as well. After just spending the day playing a few games of it with my wife and another friend I really got to recommend this game.

1. Theme. The theme of this game is very compelling to me, lots of games are about the "Age of Exploration" in one way or another (colonizing, exploring, trading, etc), but I have never played a game that went from the perspective of the natives. In this game the Europeans colonizing all over the place are the bad guys that need to be beaten. And they are love-craftian demons that are plaguing the land and need to be dealt with. The game really conveys the theme surprisingly well for a more "euro" type game.

2. This game is all about hand management. This game is about knowing what your options are and figuring out the best way to manage those resources. You don't have to get "lucky" to manage to pull the right cards at the right time, they are all available to you or at least you control when and where they are all available to you. You need to plan out not only your current turn but what your other turns are going to be based on the remaining cards or decide when you are going to "reclaim" your cards and start over. If the idea of planning out a 2-3 turn strategy of using your cards (and potentially trashing those plans based on what happens) this game isn't for you. But if you love a game like Mage Knight I would say this is pandemic meets the Mage Knight card system and you will love this game.

3. It is a really quality co-op game. Personally I am a fan of co-op games, while a competitive game I can sometimes enjoy I much more like a game where we are working for a common goal together because I don't get as much enjoyment for "besting" someone else as I do figuring out a good solution together. What I really like about this one is that there is enough going on that you really do want to figure out how to best use your resources, but it doesn't lead to the "alpha" issue where one person just plays everyone's turns. For the most part you will play your cards with minimal heavy influence from neighbors and mostly just talk about I can handle these areas and these areas but have can't handle any of this and trying to figure out the best way to spread out your resources. But I have not run into too much of a problem with telling someone what cards to play.

Overall, I can't recommend this game enough, hopefully this gives you enough information to know if this will scratch your personal tastes as well.
続きを読む
61人のお客様がこれが役に立ったと考えています
レビュー を日本語に翻訳する

deltazechs
5つ星のうち5.0 A complex cooperative game that offers something very different
2017年7月27日 - (Amazon.com)
スタイル名: ベースAmazonで購入
Spirit Island is a very unique cooperative game. This is basically a "player vs environment" type of gameplay where you play as spirits who are trying to drive off invaders/colonists, in which their actions are controlled by the game itself. The main draw of this game is that each spirit are designed to play very differently from one another, and finding how to mold your strategy to their strengths and weakness provide a very replayable and rewarding gameplay experience. For example, the Earth spirit is extremely good at defending locations, but are slow to learn new powers. Another spirit may very good at board/territory control, but is lacking in actual firepower and will need support from teammates to mop up heavily colonized spots. To add even more replability to the game, there are new scenarios that change victory and loss conditions, and adversary cards that give the invaders more "flavor" and change the mechanism of how they will dominate the land dramatically. No single strategy will work against all setup, so it is quite the brain teaser there.

If you can find other players who are patient enough to learn the rules and are willing to give this game multiple tries to really discover the layers of complexity it offers, you will most certainly have a great time.
続きを読む
46人のお客様がこれが役に立ったと考えています
レビュー を日本語に翻訳する
Amazon.comのカスタマーレビューを見る(192) 5つ星のうち4.7
Amazonプライム会員ならお急ぎ便、日時指定便が使い放題
さらに、映画もTV番組も見放題。200万曲が聴き放題 。クラウドに好きなだけ写真も保存可能。
> プライムを無料で試す