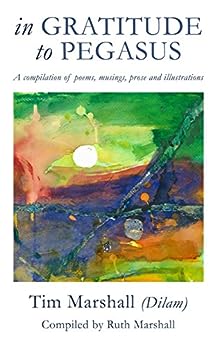 Tim Marshall's first 'episode' occurred when he was 22 years old and resulted in him being hospitalized for a week. The diagnosis was hypomania. He was prescribed medication but after persevering for a while, found it deadened his mood and he soon took himself off the medication, which resulted in a relapse. Thus began Tim's real struggle. Tim's passion was frequenting bookshops with a keen eye for anything of a metaphysical nature. Tim learnt many meditation techniques and these played a pivotal role in his recovery from an 'episode'. One thing remained constant. Tim always carried with him on his travels a pocket sized notebook and would jot down observations, musings and drawings. He was encouraged to keep a journal and began writing poems. It was Tim's wish to write a book in order to help fellow sufferers. He felt strongly this need to help people. After the diagnosis of an aggressive sarcoma in 2009, Tim was feeling the pressure to write his book. Sadly, time ran out and In Gratitude to Pegasus has been published posthumously, as per Tim's wish to help fellow sufferers.
--このテキストは、paperback版に関連付けられています。