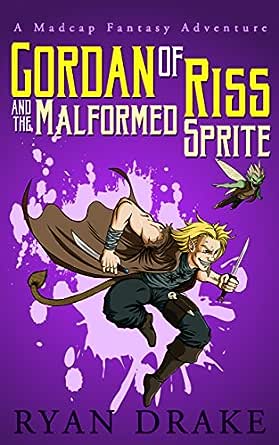 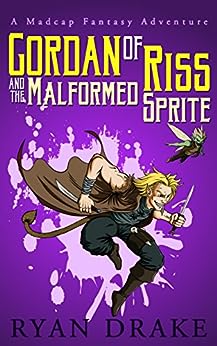 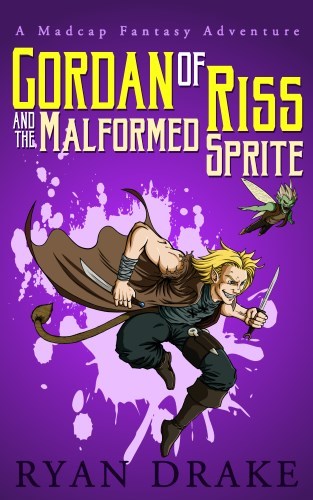 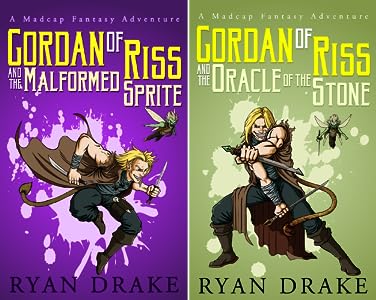 A drunken Pixie.
A vengeful part-orc Seer.
A power-hungry Sorcerer and his army of Orcs.
And they all want Gordan dead.

Gordan of Riss is a troublemaker and thief, but what makes him unique is his tail. He’s spent much of his life trying to find out why he has one, chasing down possible answers and causing chaos wherever he goes.

But when this sets him against a Sorcerer he’s never met, Gordan learns that even the most innocent quest can turn dangerous. Deadly, even.

Facing increasing threats to himself and those around him, Gordan will have to choose between his troublemaking ways and becoming an actual hero. And when the Sorcerer’s plans are finally revealed, he must use all his abilities just to survive – including a couple he didn’t know he had.

Will it be enough?

And will he learn what he most wants to know?

Gordan of Riss and the Malformed Sprite is the first in an exciting new humorous fantasy action adventure series written to stand beside the works of the likes of Robert Bevan, Patrick Weekes and L. G. Estrella.

So what are you waiting for?

Click the Buy Now button and check it out!

Warning: this is a light fantasy novel that was written to entertain. It’s action-packed, fun, fast and funny, and as addictive as anything.

It contains fight scenes and occasional light profanity, as well as an implied (off camera) sex scene or two. For all that, it was written to appeal to young adult audiences and up.

Gordon reminded me very much of Joxer from Xena, Warrior Princess, he has the same devilish sense of humour and his thieving and mischievous nature lands him in increasingly dangerous situations.

A fun romp through a new world replete with goblins, orcs and a drunken, indestructible, rather annoying, acerbic tongued pixie, Maximus.

One hopes this is just the first in a long, a very long, series. I cannot wait for their next adventure!

Kindle Customer
5つ星のうち5.0 A good read
2017年4月4日にアメリカ合衆国でレビュー済み
Amazonで購入
A good read was what I wanted and good read was what I got. The prose was smooth and realistic, the characters funny, and the plot tight (enough). There was even the suggestion of sex (which I am in favor of). It was a fun read and my only complaint was that it wasn't longer (I was really getting into it).
続きを読む
役に立った
フィードバックを送信中...
フィードバックをお寄せいただきありがとうございます。
申し訳ありませんが、お客様の投票の記録に失敗しました。もう一度試してください。
違反を報告
レビュー を日本語に翻訳する

Pepin Hulseman
5つ星のうち5.0 This is not a series of disjointed events, punctuated with bathroom jokes
2017年1月13日にアメリカ合衆国でレビュー済み
Amazonで購入
First of all, I really enjoyed this book. Reading the description I was concerned it would be like some of the other 'comedic fantasy' books out there, i.e. no plot and all stupid jokes. However, it isn't like that. The plot is engaging, and the comedy doesn't seem forced. As someone who is constantly looking for good lighthearted fantasy books, I am grateful to have found this. Highly recommended.
続きを読む
1人のお客様がこれが役に立ったと考えています
役に立った
フィードバックを送信中...
フィードバックをお寄せいただきありがとうございます。
申し訳ありませんが、お客様の投票の記録に失敗しました。もう一度試してください。
違反を報告
レビュー を日本語に翻訳する

James Robertson
5つ星のうち5.0 Fun, quick read. A great distraction from real life.
2017年5月16日にアメリカ合衆国でレビュー済み
Amazonで購入
I bought this on a whim, and am glad I did. It is a quick moving comedy, with various fantastic elements adding interest to the plot. Off now to buy the next book in the series.
続きを読む
役に立った
フィードバックを送信中...
フィードバックをお寄せいただきありがとうございます。
申し訳ありませんが、お客様の投票の記録に失敗しました。もう一度試してください。
違反を報告
レビュー を日本語に翻訳する