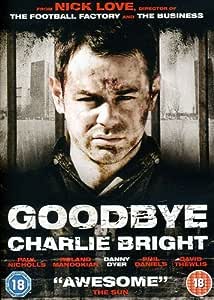 SIMMO SEZ
5つ星のうち3.0 CHARLIE BRIGHT IS JUST ABOUT ALL RIGHT
2015年3月12日 - (Amazon.com)
This has a pretty average rites of passage premise, group of lads on boring estate start going separate ways as laddish scrapes give way to something more grown-up and even tragic. Know what I mean? But the film is way more endearing than most of Nick Love's bigger budget output. Some of the performances creak, particularly a fresh-faced Danny Dyer losing it with baseball bat iwhen he finds his beloved has bedded another. But Paul Nicholls makes a sympathetic lead as Charlie, brightest of the gang and keen to get out. His voice-over manages not to grate. Roland Manookian is, as always, massively irritating, but at least he is meant to be in this case as doomed Justin, the best mate who doesn't get it. The comedy, based around half-bungled burglaries, posh parties and banter with bemused parents, is borderline funny. I passed on Jamie Foreman's repressed gay wanna be American wheeler-dealer Tony. The girls and old ladies get to swear as much as the boys, which is as it should be. Phil Daniels is a bit hammy as 'disturbed' Falklands veteran Eddie, but it almost works. Frank Harper hosts a going away party for his soldier son and manages not to beat anyone up. The 'c' word count is surprisingly small.
続きを読む
2人のお客様がこれが役に立ったと考えています
レビュー を日本語に翻訳する
Amazon.comのカスタマーレビューを見る(2) 5つ星のうち4.0
Amazonプライム会員ならお急ぎ便、日時指定便が使い放題
さらに、映画もTV番組も見放題。200万曲が聴き放題 。クラウドに好きなだけ写真も保存可能。
> プライムを無料で試す