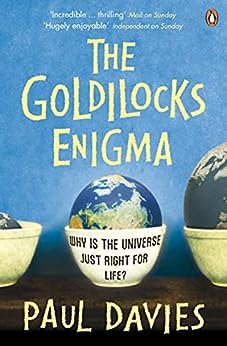 The Goldilocks Enigma: Why is the Universe Just Right for Life? (English Edition) Kindle版

"Paul Davies' Cosmic Jackpot is a truly mesmerizing book, no matter which you universe you may inhabit!" --Michio Kaku, prof. of theoretical physics, author of Hyperspace and Parallel Worlds
--このテキストは、kindle_edition版に関連付けられています。

PAUL DAVIES is an internationally acclaimed physicist and cosmologist now at Arizona State University, where he is setting up a pioneering center for the ?study of life, the universe, and everything.” In addition to his many scientific awards, he is the recipient of the 1995 Templeton Prize?the world’s largest annual prize?for his work on science and religion. He is the author of more than twenty books, including The Mind of God, About Time, The Origin of Life, and How to Build a Time Machine. He also chairs the Search for Extraterrestrial Intelligence postdetection committee, so that if SETI succeeds in finding intelligent life, he will be among the first to know.
The asteroid 1992OG was officially renamed Pauldavies in his honor. He lives in Phoenix, Arizona.
--このテキストは、kindle_edition版に関連付けられています。

kinomac
5つ星のうち5.0 If you want to get a grip on 'big bang' and the aftermath - read on
2018年9月12日に英国でレビュー済み
Amazonで購入
Not a book to skip through lightly but I think for the first time I have really got a grip of the big numbers involved in light years and the expanding universe. I have since produced a spreadsheet for my 10-year-old grandson to put time into perspective from the 'big bang' through the formation of planet earth, the start and end of the age of the dinosaurs, the pyramids, Darwin, the Wright brothers and the first PC. That got him thinking!
続きを読む
違反を報告
レビュー を日本語に翻訳する

R. Wilson
5つ星のうち5.0 Excellent, thought provoking look at some very big questions
2006年10月25日に英国でレビュー済み
Amazonで購入
This book is a review of cosmology and particle physics during the past fifty years - surely one of the most exciting periods for the two subjects. Davies offers his personal interpretation of the current position - the hope that "mind" will turn out to be a crucial part of the universe and not just a minor, un-important side-effect of creation.

New instruments and fresh ideas have produced a wealth of interesting ideas. Some theories might, in earlier times, have been regarded as merely speculative or over ambitious. However, improvements in observational methods and technology have given us clear windows into some surprising areas. Davies looks at some huge questions about very small things, such as how many fundamental particles make up the world? He also examines the very large: is there just one universe, or a huge number of parallel creations, a multiverse?

At every turn he explains things clearly and non-mathematically. This does mean that the reader sometimes has to take things on trust, but one of the great strengths of his book is that Paul Davies is careful to point out which ideas are controversial or tentative, and which are firmly established. He presents us with results from physics and discusses the implications for theology, mathematics and philosophy. He tells the story of a very busy period in science and guides the reader through complex, unresolved debates. For those who want to look deeper, he includes many detailed notes, but grouped at the end of his book to avoid breaking the flow of his narrative.

I found this an exciting and challenging book to read. I heartily recommend it to anyone who is interested in big questions and is willing to live with the fact that many of the answers can't be summed up in a tabloid headline.
続きを読む
62人のお客様がこれが役に立ったと考えています
違反を報告
レビュー を日本語に翻訳する

Richard H
5つ星のうち3.0 A facinating read at the start but strays away from fact later on.
2010年5月7日に英国でレビュー済み
Amazonで購入
This is a masterpiece of mind-expanding non-fiction. Paul introduces you gently and lucidly to the unbelievable wonders of the universe and how it seems to be tailor-made to nurture life. Regardless of whether you are a believer or not, you will be left with a sense of wonderment about how everything, and I mean EVERYTHING, came into such divine balance as to allow the universe to sustain it's existence, let alone support life. However, on the down side (at least as far as I am concerned) the second half of the book strays from the science and into the philosophical and, for me, that's when it gets boring - hence only 3 stars.
続きを読む
違反を報告
レビュー を日本語に翻訳する

Michael
5つ星のうち5.0 A Rewarding Book by One of the Best Scientific Writers
2018年12月15日に英国でレビュー済み
Amazonで購入
The book is a very good read though I suspect you have to have a bit of a scientific background to appreciate fully. But it has answered some questions that I have had for years about inflation theory and the continuing puzzle of what dark energy and matter can possibly be.
続きを読む
違反を報告
レビュー を日本語に翻訳する

JennyB
5つ星のうち5.0 Just right.
2014年8月7日に英国でレビュー済み
Amazonで購入
I've read this a couple of times now mainly because I find it really interesting and logical to follow (although not easy). It explains difficult scientific concepts step-by-step but also from a philosophical point of view too. The author is honest about his religious and scientific views which is refreshing if you want to avoid being made to feel like an ignorant agnostic by Dawkins!
続きを読む
違反を報告
レビュー を日本語に翻訳する
すべてのレビューを参照します
トップへ戻る
Amazonについて
Amazonでビジネス
Amazonでのお支払い
ヘルプ＆ガイド
日本語ショッピングのための言語を選択します。 日本ショッピングのための国/地域を選択します。
© 1996-2020, Amazon.com, Inc. or its affiliates