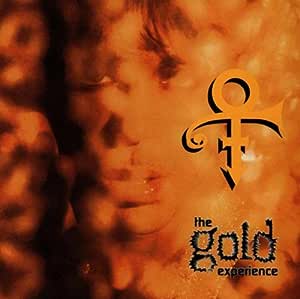 Prince Rogers Nelson is the most talented musician of his generation, but he has often seemed strangely out of sync with his own time. Performing under the single name of Prince, he mixed European American and African American musics like few others in history. Yet his extravagant obsessions with sex, religion, and dance grooves made him a stranger in the strange land of rock & roll, while his melodic genius and instrumental virtuosity made him the odd man out in an R&B world dominated by programmed rhythm machines. Perhaps that's why Nelson abandoned the stage name of Prince and adopted an unpronounceable symbol as his nom de musique. The Gold Experience is Nelson's first full-length album released under his symbol moniker and it's his strongest work under any name since 1990's Graffiti Bridge. Less a new direction than a return to the hard-edged funk of 1987-88's Sign o' the Times and The Black Album, The Gold Experience is better than either of those albums because this time the stripped-down rhythms have been bolstered by lots of guitar. In other words, the most effective integrationist in pop music has married deep-groove funk to in-your-face rock guitar--without sacrificing his usual gift for melody and harmony. Nelson has long been one of the best guitarists around, but because his licks were usually buried deep in his thickened arrangements, his chops weren't always obvious. In the more open arrangements here, they're pretty hard to miss. With this raw music come some rather raw lyrics, counterbalanced by a genuinely romantic ballad and two gospel-rooted songs lamenting the current state of American society. --Geoffrey Himes

Available again after being deleted for years! Originally re lesed in 1995. 12 tracks including 'The Most Beautiful Girl In The World'.

Andrew Cockburn
5つ星のうち5.0 Whatever the price, worth every penny.
2014年11月3日に英国でレビュー済み
Amazonで購入
I have virtually all of Prince's albums but I consider this one to be the best. There are so many variations from pop to rock to funk and back and forth. Each time I listen to a Prince album now I just can't resist this one. Each song has different reasons, and they certainly draw you in as you listen to them more becoming completely hooked on them. In Dolphin he changes from slow place to fast instantly and it works perfectly. Not sure about the lyrics being recarnated as a Dolphin but the melody is wonderful. It would be wrong to single out any song because every song are great in their own right. To think that this album stood unreleased for a year due to his dispute with WB and Prince did not highly promote it as he was releasing albums just to fulfil his contractual commitments. Either way though this is a gem that should not be missed.
続きを読む
7人のお客様がこれが役に立ったと考えています
違反を報告
レビュー を日本語に翻訳する

christopher west
5つ星のうち5.0 Good value for money
2019年5月11日に英国でレビュー済み
Amazonで購入
For the cost I can’t complain, it’s secondhand the teeth that hold cd in place are broken but the disc is almost perfect a few marks on it, but it plays perfectly.
続きを読む
違反を報告
レビュー を日本語に翻訳する

Becca Potts
5つ星のうち5.0 Prince Love
2015年7月31日に英国でレビュー済み
Amazonで購入
Having loved Prince for a long time and only having this album on tape, it seems I searched for ages for the CD replacement with no joy. So happy to have found it and revisit this album of very fond memories from the 90s. All the more as this did not feature on Prince's back catalogue on Spotify and now he has removed all of his music from all streaming services...sad face.
続きを読む
1人のお客様がこれが役に立ったと考えています
違反を報告
レビュー を日本語に翻訳する