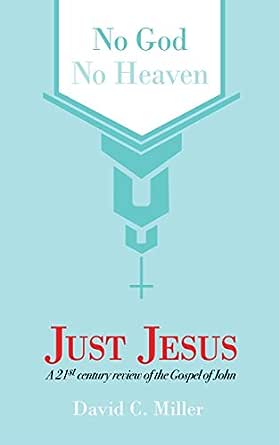 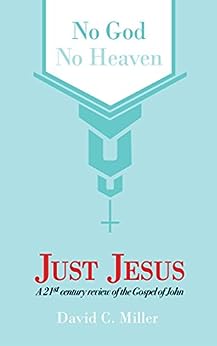 In No God, No Heaven, Just Jesus author David C. Miller asks the reader to examine the teachings of Jesus as recorded in the bible, while acknowledging that it is still debatable whether Jesus even existed. Could Christianity (stripped of its bible myths), and the words attributed to one Jesus of Nazareth (released from their biblical confusions), be of inspiration in your life?

The author’s aim is to help the reader see Jesus’ teachings in light of 21st century peoples’ education and knowledge in their Reality. He leaves it to the reader to judge if the words attributed to Jesus are worthy of consideration in the purpose of their life.

Come on a journey through the Gospel of John and think about how the Christianity of Jesus can be applied in the reality of the 21st century.

Dr David C. Miller served as a Church Council Member for both an Anglican and a Uniting Church Council. He represented the latter at three State Synod Meetings of the Church. Born in Melbourne, Miller was educated in his early years at Huntingtower Christian Science School, followed by Melbourne Church of England Grammar School. This early introduction to Christianity influenced his outlook on humanity. His tertiary education began at Melbourne University in Dental Science, followed by postgraduate studies in the UK, USA and Japan. During this period in his twenties, his earlier beliefs began to fade as he learnt of comparative religions and philosophical outlooks on purposes of life. His year in Japan introduced him to Zen Buddhism. A bibliophile from an early age he collected a library both from Australia and overseas on subjects ranging through literature, children's, history and philosophy and published articles on these subjects in New Zealand, Australia and the UK. Born into a family which includes many teachers of music, he followed his grandfather in being tutored to be a cellist. His sporting pursuits have included cricket, golf and bowls. He is married with two children and two grandchildren.