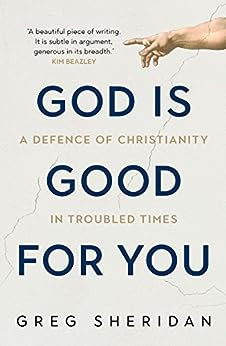 God is Good for You: A defence of Christianity in troubled times (English Edition) Kindle版

Greg Sheridan is Foreign Editor of The Australian, and a highly regarded journalist. He is active across radio and television, as well as print. --このテキストは、kindle_edition版に関連付けられています。

S. Bradshaw
5つ星のうち5.0 Inspiring, informative and well written; faith in post Christian society
2019年9月13日に英国でレビュー済み
Amazonで購入
An excellent read, well written and engaging about important topics relating to the primary theme of faith, living in a post-Christian society and what that means in facing society as an outsider, a member of a bold minority as the author suggests. Inspiring and thought provoking.
続きを読む
2人のお客様がこれが役に立ったと考えています
違反を報告
レビュー を日本語に翻訳する

E. Witham
5つ星のうち4.0 Warm and helpful apologetics
2018年8月19日にオーストラリアでレビュー済み
Amazonで購入
Greg Sheridan is a foreign affairs journalist at The Australian. From the few pieces I have read I have the impression that he takes a conservative political line in his journalism and that his style can be heavy-handed.

Sheridan’s new book God is God for You was recommended, and for that reason alone I added it to my Kindle as holiday reading. I was pleasantly surprised in every way.

God is Good for You is certainly, as the sub-title says, a defence of Christianity. It is a well-argued, highly informed piece of apologetics. Sheridan’s voice is quiet, reasonable and forceful. He engages the so-called new atheists with strong evidence that belief is more reasonable than non-belief. He shows that many of the benefits of Western democracy come directly from Christianity, and he invites us to explore Christian responses to evil and suffering.

In Part 2, he interviews Christian politicians and national leaders from the major parties, and insists that many politicians are motivated by their faith. As one politician says, ‘You find more Christians in Parliament than in the general population.’ He explores new expressions of Christianity, including Pentecostal churches like Planetshakers in Melbourne and the counter-cultural movements of traditional and new monasticism.

He confesses himself surprised by the pervasive reach of the Focolare movement and interviews its Australian leader, Lucia Compostella. In Perth, he visits Providence City Church with its steady gaze on the new place of Christianity in Australian society – not persecuted, but a minority in exile from the old paradigm of Christendom.

He critiques limited understandings of leadership in the mainline churches and their weak use of traditional and social media.

I was pleasantly surprised at the catholicity of Sheridan’s gaze across the whole church scene, and at the open tone of his writing. There were points of disagreement for me. While I agreed with his statement that Christian faith makes radical claims of transcendence, he made too easy an equation between transcendence and the supernatural, a concept I wanted him to at least qualify. However, points of disagreement were actually few.

This book could safely be offered to any thinking citizen, Christian or not, for its reasonableness, and to any optimistic Christian for its clear-eyed analysis of where we are in modern society and its remedies for the future.

Neil Cullan McKinlay
5つ星のうち2.0 Engaging, but reader beware!
2019年4月8日にオーストラリアでレビュー済み
Amazonで購入
This is a well-written and engaging book. But reader beware! Some, if not most, of the theology contained therein is clearly wrong – as in being un-Biblical. However, the book is worth a read if only to help you get a handle on the sorry state of Christianity in Australia, including among our politicians. It gives the impression that most Aussie Christians do not believe in something as basic as the Gospel as it is articulated in, e.g., The Apostles’ Creed, especially the bits about the final judgment and the resurrection of the body.
After reading God is Good for You I feel the need to point everyone to that ancient article that unites all Christians in belief. Here it is, THE APOSTLES’ CREED: I believe in God the Father Almighty, Maker of heaven and earth; and in Jesus Christ, His only Son, our Lord, which was conceived by the Holy Ghost, Born of the Virgin Mary, suffered under Pontius Pilate, was crucified, dead, and buried; He descended into hell; the third day He arose again from the dead; He ascended into heaven, and sitteth on the right hand of God the Father Almighty; from thence He shall come to judge the quick and the dead. I believe in the Holy Ghost; the holy catholic church; the communion of saints; the forgiveness of sins; the resurrection of the body; and the life everlasting. Amen.
続きを読む
3人のお客様がこれが役に立ったと考えています
違反を報告
レビュー を日本語に翻訳する

Tim Foote
5つ星のうち5.0 Brilliant!
2018年8月27日にオーストラリアでレビュー済み
Amazonで購入
I thought this was a brilliant thesis that gives a modern, educated & eloquent voice to the most important subject of all-time. I think Greg is practising what he is preaching & that is to accept the position of being a bold minority and seeking to add his voice, energy and faith to the most noble pursuit, the seeking & proclamation of truth. Wonderful work Greg.
続きを読む
2人のお客様がこれが役に立ったと考えています
違反を報告
レビュー を日本語に翻訳する
すべてのレビューを参照します
トップへ戻る
Amazonについて
Amazonでビジネス
Amazonでのお支払い
ヘルプ＆ガイド
日本語ショッピングのための言語を選択します。 日本ショッピングのための国/地域を選択します。
© 1996-2020, Amazon.com, Inc. or its affiliates