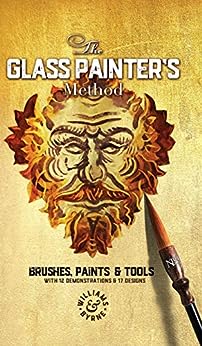 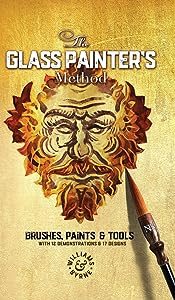 J. Kenneth Leap, author of Silver Stain: An Artist's Guide - "This book is great as I was expecting. I really like the clever way the authors found to link the text to their videos which are so helpful. They lay out each section very clearly and deliberately. I highly recommend this superb little volume which also fits great in the hand."

John Reyntiens: Reyntiens Glass Studio - "What a breath of fresh air - a clear, concise book on glass painting. This is the perfect book for anybody beginning or experienced. The clarity, simplicity and step-by-step information is such a joy. I thoroughly recommend it."

Judith Schaechter - "Williams & Byrne's The Glass Painter's Method is an essential book for all stained glass artisans. It covers the essentials of glass painting in a simple, comprehensive way that demystifies the process and makes it easy to understand and follow. An absolute must for any stained glass artist's library."

Oakleaf
5つ星のうち5.0 Superb. Meticulous Masters show how to best proceed with glass painting.
2019年3月29日に英国でレビュー済み
Amazonで購入
Williams & Byrne are from another era, when Craft was taught meticulously, and no ''that'll do'' sloppiness.

Glass painting is a demanding skill that requires technique and practice to do well, it looks so 'easy' when in the hands of a master, as does any skilled craft, but W&B begin at the beginning...teaching one how to mix glass paint.

People who may have done glass painting at a class will have spent maybe a minute mixing their paint with water., just a little, as it is expensive.

W&B do things very differently, they advise that one is to mix a 'lump', using what seems like large amounts of Reusche powder paint, and work on perfecting the lump by mixing it thoroughly with proportions of water and gum arabic and letting it 'rest' overnight.
It is a mysterious alchemy, my bowl of seemingly creaky dry powder transformed into a glossy obsidian puttylike blob...
Letting it rest overnight now, as advised.

W&B advise on what tools one needs, [surprisingly few]
Poor tools [brushes] and disheartening, so it really does pay to heed the advice in this book

Silver Stain is also covered..not tried this out of a college setting as it is notoriously capricious, and needs test firings.

W&B's work is the best painting I have seen , and their techniques are freely shared in this book...however, the skills are all their own, sadly one cannot 'buy' those, but with practice and dedication, one can improve especially if given a good grounding in practicalities as given in this book.

Midwich Cuckoo
5つ星のうち5.0 The definitive guide to Stained Glass Painting for beginners by experts
2020年7月8日に英国でレビュー済み
Amazonで購入
I write reviews infrequently unless something is particularly awful or particularly exceptional. This book is the latter. I am a complete novice in the medium of stained glass painting. I didn't even own a kiln but something drew me to this book and the synopsis and reviews confirmed my purchase. I hadn't even visited the Williams & Byrne website, now I barely can leave it. It is comprehensive and understanding.

The book contains all the essential information to embark on stained glass painting - brushes, paint, equipment and what each item is used for, why it is used and how it is used, simply and clearly. The love of the craft and enthusiasm to instruct in a gentle encouraging way is evident. The bonus videos are thorough and even soothing. If this is book 1, then I truly look forward to book 2.

Needless to say, moving on from simple stained glass construction; I have bought the kiln, the paints, the brushes and palettes etc. It is early days but I need no other instruction manual and their videos and website as these are the experts.
続きを読む
3人のお客様がこれが役に立ったと考えています
違反を報告
レビュー を日本語に翻訳する

J. Ward
5つ星のうち4.0 A good introduction only, not the definitive tome you may be looking for.
2019年5月16日に英国でレビュー済み
Amazonで購入
David Williams and Stephen Byrne operate a stained glass business in the village of Stanton Lacy in Shropshire, both making new and restoring old stained glass, additionally running teaching workshops at their home studio, as well as disseminating stained glass methods to all and everybody on–line. They appear to be part philanthropic, part commercial. This Kindle e-book is a basic introduction to the techniques and skills involved in stained glass painting. It is very basic, and you will not find much on advanced techniques in this short book. Nor will you find much on the practicalities of leading the glass and installing it in a window reveal. It is a book on painting techniques only.

The book begins with a brief discussion on stained glass paints, how to mix them and keep them in a good working state, the specialist brushes needed (hakes, badgers and tracers etc) and where to buy them, palettes, palette knives, painting bridges, light-boxes on which to work with light shining through from below illuminating the glass and the design as you work, and a serious piece of equipment… a glass kiln in which to fire the painted glass into a state of permanency. There is a brief mention of the different types of glass upon which stained glass artists paint, however much more could have been said on this subject.

The book goes on to describe undercoat washes, how to trace the main lines of the design, the use of bridges to steady the painting hand and arm, the strengthening of the traced lines, flooding areas of the design with paint, cutting through the undercoat to create highlights, softening the lines and highlights, scrubbing and stippling, the use of the fingers to create softened effects in the paint and, when finished, how to fire the glass in a kiln. Detailed firing schedules, consisting of temperature rises and periods of holding the temperature steady at a certain point, are provided, in both the ascending and descending directions.

The next part of the book deals with shadows and their somewhat elaborate creation. Painting on glass requires different techniques to painting on canvas. The different types of mediums in which to apply the paint to the glass are discussed… water, gum Arabic, glycol, oil. The basic technique of applying silver stain is demonstrated, as is using various essential oils such as balsam torchwood, or spike of lavender. There is a warning about the use of enamel paints.

The book concludes with a tantalizing glimpse of 5 or 6 other, alternative techniques, mainly employing different sequences of… undercoating, blending, tracing, strengthening, highlighting, shadows and softening, firing once or twice or even multiple times, painting on both the front and the back of the glass. There is also a rather mysterious story about Nathaniel Somers and the use of glider’s gold size as a medium… but it is written in such a relatively cloak and dagger, confused style, not to be perfectly sensible. This is Byrne loving every minute of being mysterious, superior, long-winded and vague… with the aim of first awakening and then capture your interest... but, in essence, probably much ado about nothing ? Simples ?

The photograph illustrations are generally appropriate and of clear quality. There is an illustration on every page. The e-book is well designed and laid out. The print quality is generally clear and very good. There are links to several videos in which the techniques are demonstrated… these video presentations are well worth viewing, they complement the text, as well as bringing the techniques to life.

Williams is an arts graduate who worked for the professional stained glass artist, Patrick Reyntiens, for 8 years, during which apprenticeship he thoroughly learned the trade. He can be described as a highly skilled craftsman, rather than a creator of fine art. Byrne was a business analyst in the City of London until he reached 40, whereupon he abandoned everything and plunged into the craft of stained glass. He could be described as an enthusiastic amateur, who sees himself as a teacher.

Williams & Byrne often illustrate the book using examples of their own stained glass work, which is sometimes quite good, but generally rather banal. The results of their work tend to be human, animal, quasi-spiritual forms, and decorative patterns, which have an almost cartoon quality about them, mere caricatures rather than attempted realities. Williams is the more skilled designer of the two and has some artistic pretensions, genuine accomplishments and qualities. He tends to paint stained glass in the traditional style, or rather a modern imitation of it. His failing is his line drawing, which is too thick, too stark black, and too heavy, with everything he paints turning into crude gargoyles. Byrne, however, is very plodding and pedantic, a copyist rather than a creator. His line drawings on glass are often oppressively heavy and non-subtle. There is no subtlety of sfumato, or Chiaroscuro. Neither of these two stained glass makers achieve the same quality of artistic creation as medieval, or 18th, or 19th century artists. Does anybody ?

If you are new to stained glass painting and want to learn some of the basic techniques, then the Kindle edition is cheap and well worth reading. You will learn much about the basic art of painting on glass and avoid many of the pitfalls and frustrations, the result of lack of understanding, which is the common experience of almost every beginner. However, if you already have some knowledge of glass painting techniques and want to advance to the next level, then you may find the book disappointing and too limited.
続きを読む
3人のお客様がこれが役に立ったと考えています
違反を報告
レビュー を日本語に翻訳する

Charlotte Bulley
5つ星のうち5.0 Extraordinary: fires the inspiration AND grounds in the pactical
2018年12月21日に英国でレビュー済み
Amazonで購入
Wow! What a diamond of a book. Everything about it is a delight.

It inspires with images, ideas and stories, and at the same time encourages us with down-to-earth guidance and advice. It names the essential tools needed to produce terrific work, and clearly sets out the techniques, together with the methods of mastering them.

There are also wonderful illustrations, not just of the tools and images of glass, but of mythical creatures greeting and saluting us on many pages. Also links to videos to help with practising techniques, and showing the beauty of what can be achieved.

On a subtler level, it taps into a philosophy of attentiveness and focus. I found the passages about the alertness required by properly prepared paint, and immersion in practice, very engaging. Especially as this is all in the context of a craft which has been practised and has endured for centuries. The references to Nathaniel Somers, and Hephaestus, god of fire and craftsmen, are alluring.

Even if you have never painted on glass or even thought about it, this is a great book, because it is beautiful, well-written, and concerned with the inspiration of creative practice.
続きを読む
3人のお客様がこれが役に立ったと考えています
違反を報告
レビュー を日本語に翻訳する

Mrs. S. M. Yates
5つ星のうち5.0 Learning from the Masters
2019年1月9日に英国でレビュー済み
Amazonで購入
I bought the download version of this book. I’m new to stained glass but despite my age am very keen to learn.I love the way the instructions assume nothing without patronising.There are lots of books available but reading through this book, I can’t help but feel like I’m being shown how to learn the craft the proper way, the real historic, traditional way.Like I’m in a workshop from centuries long past.If you want to learn painting stained glass not only for the craft itself but also to feel like you are touching a part of history, this is the book.
続きを読む
2人のお客様がこれが役に立ったと考えています
違反を報告
レビュー を日本語に翻訳する
すべてのレビューを参照します
トップへ戻る
Amazonについて
Amazonでビジネス
Amazonでのお支払い
ヘルプ＆ガイド
日本語ショッピングのための言語を選択します。 日本ショッピングのための国/地域を選択します。
© 1996-2020, Amazon.com, Inc. or its affiliates