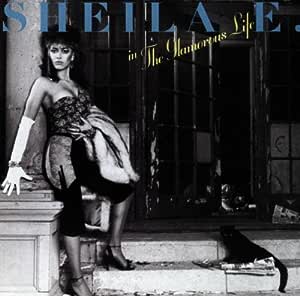 Sheila Escovedo hit the big time when she hooked up with Prince Rogers Nelson. The dimunitive pop/soul icon mentored the percussionist and shaped her into a glamourous star. She hit the big time with the hit single "The Glamorous Life" and toured and recorded as a member of Prince & The Revolution.

Mary-Elizabeth
5つ星のうち5.0 produce & Service
2013年8月22日に英国でレビュー済み
Amazonで購入
Sheila E is a great artist , been a fan since the 80`s never been able to get the cd before . The CD was in good condition , came when it said it would and i would recommend it to family and friends.
続きを読む
1人のお客様がこれが役に立ったと考えています
役に立った
フィードバックを送信中...
フィードバックをお寄せいただきありがとうございます。
申し訳ありませんが、お客様の投票の記録に失敗しました。もう一度試してください。
違反を報告
レビュー を日本語に翻訳する

Antony May
5つ星のうち4.0 'Short On Value For Money But High On Quality'
2017年6月17日に英国でレビュー済み
Amazonで購入
Sheila E is a wonderful musician and her percussive talents really shine through here on this 6 track album. I was probably one of the first Brits to dive into this album back in the day as I had been a Prince fan from early on in his career and had 'lapped up' everything related to him since then.

Initially, this album was driven by demand for the title track single but listening to it now the track does seem rather hopelessly over-blown and extended (even though it is still a fine 'purple pop song'). Sheila really gets to work up a sweat during the nine minute duration and there's no doubting she and her band are enjoying themselves but in reality this version of the song would be more suited to a live arena...

'The Belle Of St Mark', however still holds all of its magic! With its incredibly catchy synth riff and memorable chorus its the best thing Prince himself never recorded. Jesse Johnson had a hand in co-writing the instrumental funk-workout, 'Strawberry Shortcake' and its another Minneapolis sound floor filler. 'Oliver's House' is the only other uptempo song on the album but its not as good as the aforementioned by some way. Sheila's vocals are rather weedy and unconvincing and the song has less of a pop edge to it making it seem more like a 'filler' in the bargain.

I LOVE the typically Prince like, sad, somehow 1940's sounding 'Next Time Wipe The Lipstick Off Your Collar' though. Its kind of in the vein of 'How Come U Don't See Me Anymore' or 'Condition Of The Heart' only from a female perspective. 'Noon Rendezvous' completes the album and is atmospheric without being particularly memorable. Its not a bad track but takes a few listens to fully appreciate - probably because it follows the two best tracks on the album, I guess.

Overall, 'The Glamorous Life' may be short on tracks and a bit 'saggy' in places (highlighted here by the fact that the song was edited rather than extended for U.K. 12") but the good tracks are excellent and if you like the early Prince sound you should buy it.
続きを読む
2人のお客様がこれが役に立ったと考えています
役に立った
フィードバックを送信中...
フィードバックをお寄せいただきありがとうございます。
申し訳ありませんが、お客様の投票の記録に失敗しました。もう一度試してください。
違反を報告
レビュー を日本語に翻訳する

HE WHO FUNKS BEHIND THE ROWS!!
5つ星のうち5.0 Sheila E.'s Slammin' Debut ala His Royal Badness @ The Height Of His Purple Reign!!
2009年12月19日にアメリカ合衆国でレビュー済み
Amazonで購入
During the magical summer of 1984, Prince Rogers Nelson,
a young upstart musical genius out of Minneapolis had finally
come into his own on the world pop/rock stage with a blockbuster
semi-biographical movie "Purple Rain" and it's amazing innovative
soundtrack which was well atop the POP and R&B charts for weeks,
would go on to sell 16 million copies, and win an Oscar for best soundtrack!
To say that the world was his oyster at this time would be a gross understatement!

Always sharp & industrious, the prolific musical mastermind had already given the
world one of the funkiest bands this side of the 70's in THE TIME as well as
two sexy girl groups (Vanity 6 / Apollonia 6) who had potent hits at the time
but proved to be more dispensable. He decided to add another formidible protege'
to his purple roster in the summer of '84 with the addition of one Sheila Escovedo
or "Sheila E." as she was coined by him. Sheila E. had been a respected percussionist
on the jazz scene, playing behind greats like George Duke and others.
She had also toured and did session work with pop greats like Lionel Richie,
The Jacksons and others. She heralded from a respected musical family, so her pedrigree
was well documented within the industry. But Prince being Prince, he had a definite
vision for how this dynamic female drummer/percussionist would fit within his
"Purple Empire", and so in addition to giving her a new name & persona, he also
found a way to utilize some excess tracks he had in reserve.
As he did on The Time's 1981 self-titled debut, Prince (aka Jaime Starr)
produced, composed, arranged and performed most every instrument on every track
that you hear within this album and placed Sheila E. in the starring role of
"The Glamorous Life"!!--the rest, as they say, was history!

The title track is a tour de force in both Minneapolis and 80's funk!
This joint used to set the club off back in summer/fall of 1984 along with
another Prince/Sheila E. collab which I wish could've been on this album called
"Erotic City", which Prince used as a B-Side to "Let's Go Crazy".
When those two songs came on back in my club and house party days, it was all over!
(Does anybody remember dances like The Prep, The Smurf, The Bedrock, The Cabbage Patch, etc.??)
In addition to the title track, other slammin' tracks on here are "The Belle Of St. Mark"
which was pure 1984 Prince and Sheila E.'s second single from this gold plus-selling album.
The stank-funky instrumental "Shortberry Strawcake", the groovin' fun funk of "Oliver's House"
and the drama-filled slow jams "Noon Rendevouz" and "Next Time, Wipe That Lipstick Off Your Collar"
close out the rest of this memorable debut with a bang!
This album was short, sweet, funky & to the point....
Just enough to make you tune in for the next Sheila E. chapter,
which was 1985's "Romance 1600", which featured another Prince/Sheila E.
collab called "Love Bizarre" which was a huge hit.
Anybody lucky enough to see Prince during his amazing Purple Rain Tour of '84/'85
knew that Sheila E. and her band (formed after this album was released),
were the opening act to Apollonia 6, The Time, and the headliner, his royal badness, PRINCE himself!
I saw that show 3 times in Miami, Orlando and Tallahassee, FL in early 1985...
one of the best shows I've seen in a history of great concerts!
This album is still a funk essential!--Buy It! (-:
続きを読む
7人のお客様がこれが役に立ったと考えています
役に立った
フィードバックを送信中...
フィードバックをお寄せいただきありがとうございます。
申し訳ありませんが、お客様の投票の記録に失敗しました。もう一度試してください。
違反を報告
レビュー を日本語に翻訳する

Patrick N. Foster
5つ星のうち4.0 it's glamorous
2013年2月2日にアメリカ合衆国でレビュー済み
Amazonで購入
So yes, it is, to a large extent, a Prince album. But that -- especially a 1984 Prince album -- is Not a Bad Thing. And in case you hadn't gotten the telegram, this is Not Vanity 6. Sheila E is a for-real musician. With four of her best (the singles "Belle of St. Mark," "Oliver's House," and "the Glamorous Life," and the shoulda-been-a-hit "Next Time Wipe the Lipstick..."), this easily tops _Romance 1600_ (whose "Sister Fate" would've put _The Glamorous Life_ Dangerously Close to Five Stars.) My copy of the CD contains an interesting but imho superfluous remix of the title track.
続きを読む
役に立った
フィードバックを送信中...
フィードバックをお寄せいただきありがとうございます。
申し訳ありませんが、お客様の投票の記録に失敗しました。もう一度試してください。
違反を報告
レビュー を日本語に翻訳する

JOSEPH JEDLICKA
5つ星のうち5.0 Sheila E has talent to burn
2014年3月9日にアメリカ合衆国でレビュー済み
Amazonで購入
I do not know what else can be said about the great and very talented Sheila E who has so much talent and will always get people on their feet dancing.
続きを読む
役に立った
フィードバックを送信中...
フィードバックをお寄せいただきありがとうございます。
申し訳ありませんが、お客様の投票の記録に失敗しました。もう一度試してください。
違反を報告
レビュー を日本語に翻訳する