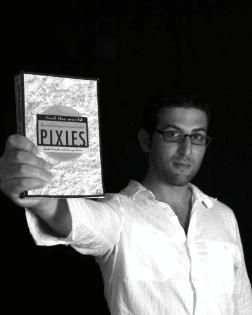 “Don't even try to understand; just revel in the weirdness, along with the wonderful photographs and other archival material Frank includes in this book.”—Maureen Corrigan, National Public Radio

“Classic cinema buffs and Dalí fanatics will appreciate the care and effort taken by the authors.”—Booklist

“This graphic novel is utterly one of a kind…the overall page compositions are exceptional, bursting with motion, mind-bending patterns, and wildly shifting color schemes…This messy, imperfect, fearless visual buffet is almost certainly better than any film version would have been.”—Publishers Weekly

“The graphic novel is a fun read in its own right, and the well-told story behind the story makes it an interesting part of Hollywood’s history.”—San Diego Jewish World

“A book that should satisfy fans of Dali or the Marx Brothers, or anyone looking for something completely outside the norm.”—Foreword Reviews

“A most strange yet passionately earnest graphic novel...A lavish layout, with a nice overall design and chock full of opening essays and forewords that bring the reader along on Frank’s quest to find and bring Dali’s half-baked project to full fruition."—Geeks Of Doom

“A sense of marvel persists throughout the book.”—Hyperallergic

“This book is a gallery, a museum, a riotous romp of art that reverberates through personal and public history and will make your dwelling's shelves (and your mind) a little loonier.”—The Austin Chronicle

MGM STUDIOS, LOS ANGELES, CA, 1937—Though never documented on film or in writing, the scene is easy to imagine in the theater of the mind: Two men are seated next to each other: a dark-haired, wideeyed Spaniard wears an anachronistic velvet suit, while his curly haired cohort has swathed himself in a ratty trench coat. Their outlandish appearance and hand-me-down fashion, not to mention the contrast between the men themselves, paints a picture of strange characters up to no good. Anywhere else in the world, they might have been mistaken for vagrants.
But in the waiting area outside the office of film producer Louis B. Mayer, one would expect to find the most unusual people. In fact, if you weren’t such a character, you probably wouldn’t be waiting for a meeting with the head of MGM Pictures. Here, eccentrics were a common sight. Vikings, pirates, monsters, witches, and every other costumed type imaginable could be seen wandering the movie lot every day.
Yet, somehow, these two particular gentlemen seemed out of place. Separately, either would stand out in a crowd. Together, they created a scene simply by sharing the same space, their uniqueness magnified.
Regarding the duo cautiously from behind her desk, Mayer’s secretary was convinced they had to be in the wrong office. But she was new, fresh off the bus from Ohio, and this was her first job in the exciting city of Los Angeles. If only her friends could see her now . . .
She had no idea the man with the crazy red hair had already spoken to her boss, informing him that he’d be popping over with his friend from Spain to pitch a movie idea. She would learn that this particular redheaded man could see Louis B. Mayer whenever he wanted. He—Arthur, along with his brothers Julius and Leonard—had been making Mayer and the other studio heads a lot of money. And that’s why Mayer (like his predecessor, Irving Thalberg) put up with the mischief they brought to his doorstep.
Despite their names being on the list of visitors, the secretary didn’t want to flub her first day of work. So she watched the pair curiously to make sure they didn’t do anything . . . funny. The buzzer rang; the secretary jumped nervously. She picked up the telephone and heard Mayer’s voice. “Yes, sir. Right away, sir,” she replied. She put down the phone and stood.
“Mr. Dali, Mr. Marx, Mr. Mayer will see you now.”

Josh Frank is author of Fool the World: The Oral History of a Band Called Pixies, In Heaven Everything Is Fine, and, with Black Francis and Steven Appleby, the illustrated novel The Good Inn. In his spare time, he owns and operates the Blue Starlite Mini-Urban Drive-In Movie Theatre in Austin, Texas.

Tim Heidecker is an award-winning comedian, writer, director, actor, and musician. He is one half of the comedy team Tim & Eric, with Eric Wareheim, known for the TV shows Tom Goes to the Mayor, and Tim and Eric Awesome Show, Great Job!, as well as the film Tim & Eric’s Billion Dollar Movie and the popular book Tim & Eric’s Zone Theory.

Manuela Pertega is a comics artist and illustrator based in Barcelona, Spain. She graduated from the University of Barcelona with a specialization in drawing and restoration/conservation. She teaches art at Badalona VII, a public art institute, and at La Taca, an art school.
続きを読む