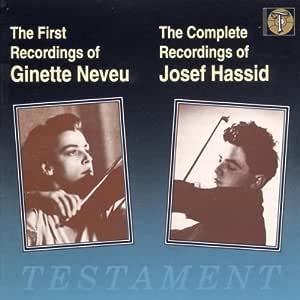 Samir Sobhy
5つ星のうち5.0 Two Child Prodigies
2012年7月11日にアメリカ合衆国でレビュー済み
Amazonで購入
This is an outstanding CD because it contains extremely rare recordings by two of the most astonishing child prodigies of the violin in the early XX Century, who had an unusually short career and life. It covers the early recordings by Ginette Neveu (in 1938-39), and the complete recordings of Josef Hassid (in 1939-40).
The French Neveu (1919-1949), had her first public performance when she was only five years old, and her "official debut" when she was seven. She started to accumulate first prizes, and in 1935, at the very first International Wieniawski Competition in Warsaw, she won first prize, at the age of 16. She immediately started performing in tours which took her to all corners of Europe, then the United States, Russia, Australia, and South Africa. The Second World War interrupted her career, which she began to pick up at the end of the war. Unfortunately, she died in an airplane crash in her way to the United States.
The Polish Josef Hassid (1923-1950), had a shorter and more tragic career and life. After showing unusual talent during his musical studies, he entered, as Neveu, the Wieniawski Competition in 1935, when he was only 12, one of the youngest among the 180 contestants. Despite his brilliant performance, he suffered a memory loss. But this did not overshadow his talent and gift, leading him to become a student of Carl Flesch, the Hungarian virtuoso, and many great violinists came to hear him play. Invited by Flesch to go to London, he made his recital as well as his orchestral debuts in April 1940. His final concert was in March 1941, after which he suffered from depression and other sever mental disorder. Some attribute this to a failed liaison with a young woman in Belgium. He was admitted to a psychiatric hospital in June 1941, and died in 1950 from complications of a brain surgery.
In addition to their respective extraordinary talent and gift, Neveu and Hassid had many things in common: they started their careers extremely young; they entered the first Wieniawski Competition in 1935; they were students to Carl Flesch; their virtuoso performance ensured them very quick recognition; their recordings were very few and rare, and their career and life were tragically short.
The CD is digitally remastered from the original 78 rpm discs. The quality of the sound is very good, but, understandably, not to be compared with current high quality recordings. Its greatest interest is that it allows us to hear two outstanding young violinists who, if destiny had taken another course, would have become two of the greatest performers of all time.
続きを読む
4人のお客様がこれが役に立ったと考えています
役に立った
フィードバックを送信中...
フィードバックをお寄せいただきありがとうございます。
申し訳ありませんが、お客様の投票の記録に失敗しました。もう一度試してください。
違反を報告
レビュー を日本語に翻訳する

ricardo_guerrero
5つ星のうち5.0 I'll echo the other comments
2012年2月20日にアメリカ合衆国でレビュー済み
Amazonで購入
Ginette Neveu was one of the greatest musical talents in France. Sadly, she didn't live to see her 31st birthday. Josef Hassid was a Polish violinist who also died tragically, leaving behind only a scant nine recordings. I would have given anything to hear him play a concerto or two. I'm sure he sounded amazing. Some have said that he was equal to 'the other J.H.' (that would be Heifetz!) This disc contains their remarkable violin playing of "miniatures". I'd never heard the Kreisler "Grave", nor the arrangement of the Chopin c-sharp minor Nocturne (arranged by someone named Rodinov, although I thought Milstein was the only one to transcribe it). These recordings are now over 70 years old, ancient relics, but they're from a time when music like this was appreciated by the masses. Listening to them reminds us of a bygone time that is never even remotely to return. I particularly enjoyed hearing the pairing of Sarasate's slow, reflective "Playera" (which ironically is never played anymore) alongside its counterpart, the much better known "Zapateado". Hassid plays the Achron "Hebrew Melody" with passion and longing - easily the best recording of this work. The Testament label is always good for unearthed recordings such as these. I'm indebted.
続きを読む
2人のお客様がこれが役に立ったと考えています
役に立った
フィードバックを送信中...
フィードバックをお寄せいただきありがとうございます。
申し訳ありませんが、お客様の投票の記録に失敗しました。もう一度試してください。
違反を報告
レビュー を日本語に翻訳する