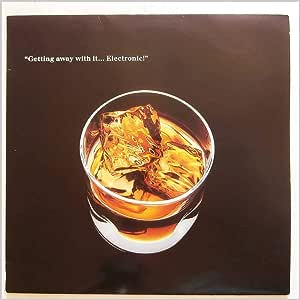 Getting Away With It

ELECTRONIC Getting Away With It (Original 1989 UK 3-track 12 vinyl single released on the legendary Factory label including the Extended [7:33] & Full Length [5:14] Mixes plus Lucky Bag. The glossy picture sleeve has just a little edge wear while the vinyl is in excellent condition FAC257)

Autonome
5つ星のうち5.0 Great track
2013年5月15日に英国でレビュー済み
Amazonで購入
Sometime in 1989, Neil Tennant, Chris Lowe (of Pet Shop Boys fame), Johnny Marr (ex-Smiths) and Bernard Sumner (of New Order fame) decided to spend some time in the studio to record music together. Since PSBs were playing an away game in Manchester, they were guests in the new Marr-Sumner combo called "Electronic". This cooperation would produce one of the best pop albums of 1991. Within this album, the two songs written with Pet Shop Boys are a triumph. I have written in another review what I thought of "Electronic" the LP. Suffice it to say that "Getting away with it", the first single of Electronic (written with Neil Tennant) is superb. Great melody, great rhythm and a great string coda from Ann Dudley that was not in the initial 7'' version but that would be added in the album version. A great song in any case, presented here also in a solid 12'' version - if not as brilliant as the 12'' for "In Private".
続きを読む
1人のお客様がこれが役に立ったと考えています
違反を報告
レビュー を日本語に翻訳する

Barry C. Gaynor
5つ星のうち5.0 What a Great Song!
2013年3月13日にアメリカ合衆国でレビュー済み
Amazonで購入
I have been trying to find this song for about ten years. I heard it once and never knew its namd or the artist. Recently I learned I could search for the name and artist, by typing in some of the lyrics into a search engine. I did this and finally learned the name of the song and band.

I've waited for years to hear this again, and I love it.