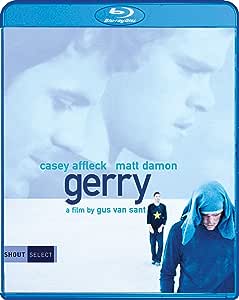 rapbrain
5つ星のうち3.0 Never seen a movie like this before.
2005年4月19日
形式: VHS
I long-time wanted to watch the movie, and finally did. I felt like maybe the two had a bad night-mare, or an expreience of live or death. I do think that it would much helpful if it's much shorter one because 103minites kinda too long to watch like this type of movie. It's too long to keep thinking to the depth of the story. However, the view is very awesome!! Please watch it for yourself, and think your own story of the movie.
続きを読む
役に立った
コメント 違反を報告
レビュー を日本語に翻訳する
すべてのカスタマーレビューを見る(1)
カスタマーレビューを書く

Robert S Michaels
5つ星のうち3.0 I'll go on/I can't go on
2003年12月17日 - (Amazon.com)
Amazonで購入
Definitely not one to watch when your patience is at a minimum, but Gerry definitely demonstrates Van Sant's (and Damon's) willingness to go out on a limb. I won't extend that compliment to Casey Affleck, cuz really, what does he have to risk? Anyway, the cinematography is beautiful. The central concept is brilliantly simple. The Beckett-ish lack of narrative and dialogue is... a little hard to take. I found myself wanting just a little more, if only to feel more about these people when I found out how it ended. But I guess I can forgive that, as it's apparent this was the filmmaker's deliberate decision. The Amazon reviewer definitely is right about the experience vs memory thing. Last night as I watched it I found myself wondering why more than once. But a day later I'm still thinking about it.
続きを読む
3人のお客様がこれが役に立ったと考えています
レビュー を日本語に翻訳する

gdavisloop
5つ星のうち4.0 Finally, a reason to get Blu-Ray... or not...
2009年4月5日 - (Amazon.com)
Amazonで購入
This is the first DVD I've ever seen that I actually CARED to see in a sharper format.

Unfortunately, it does not appear to be available in Blu-Ray (and I'm not sure I'd spend the money if it was), and I'd rather see it bigger as well as sharper, so perhaps the Nuart will run it someday at midnight. I'll be there!

As to a review of the film, I think everything that could be said has already been said, but I'll try this:

Among Van Zant's films in which "nothing happens," probably the least happens in this one. Here is my rough preference for the films:

I liked Paranoid Park best.
I'll give Gerry a second.
Elephant is NOT the best film on the subject, not even the best experimental film on the subject (see ZERO DAY for a brilliant alternative), and finally,
I really couldn't stand Last Days, although it too would have been better in Blu-Ray, because at least I might have spent less time thinking that the wide shots weren't sharp enough.

Sadie Thorndike
5つ星のうち4.0 Slow-moving but wonderful
2015年11月8日 - (Amazon.com)
Amazonで購入
If you like the desert, the views are gorgeous, but this is not for those who like "typical" movies. It purposely moves slowly - VERY slowly. The ending is surprising, sad, poignant and disturbing.
続きを読む
3人のお客様がこれが役に立ったと考えています
レビュー を日本語に翻訳する

R Atherton
5つ星のうち5.0 Von Stroheim would have loved this film.
2004年9月6日 - (Amazon.com)
Amazonで購入
An ultra-simple story, told with the barest minimum of dialogue and sound. Two normal guys, guys who watch TV and play video games, go off on a jaunt in the desert to see "the thing," whatever that is. Before they reach it, they get bored and decide to turn back to the car. And then...they are lost. And more lost. From the brush and cactus of the early scenes, the background gradually becomes rock, then mountain, then sand. The guys gradually realize that they're going to die. Nobody says anything about it, but we all know. Give this film the attention, the patience that it requires, and you will be amply repaid.
続きを読む
3人のお客様がこれが役に立ったと考えています
レビュー を日本語に翻訳する