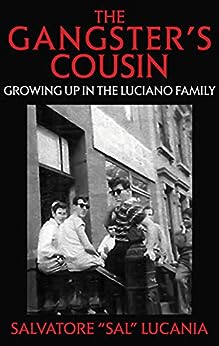 The Gangster's Cousin: Growing Up in the Luciano Family (English Edition) Kindle版

Growing up in the streets of Harlem in the 1940s and 50s, Sal Lucania survived by outwitting neighborhood bullies, the abusive priests who ran his school, local gangsters, and even some distant mafia relatives. He was born into a Sicilian family in 1942 and was named for his cousin Salvador Charles "Lucky" Luciano. As a Sicilian, he took on the philosophy of his culture: "No authority higher than our own." As a relative of "Lucky" Luciano, he took on some of the negative media images of Luciano as a dangerous person. And he sometimes got special treatment because of his relative. Either way, he lived his own unconventional life. At 16 Sal punched an Irish Christian Brother and got kicked out of school. At that time he entered his first career: bootlegging Chanel No. 5 perfume with the help of his cousin Carl, a "made man" in the Gambino family. Later, depressed by the dishonor among some associates, the violent deaths of good friends, one try at honest labor - hauling 96-pound cement bags - he decided to get out of Harlem. His journey away from Harlem led him to dealing craps in Las Vegas, becoming a pioneer in the wind business, exposing a group Scientologists, founding a spiritual community in Northern California, spending time in federal prison and mining diamonds in West Africa. Presently he lives outside of San Francisco, his five adult children nearby. His devotes his time to seeking underlying truths of life and writing. --このテキストは、paperback版に関連付けられています。