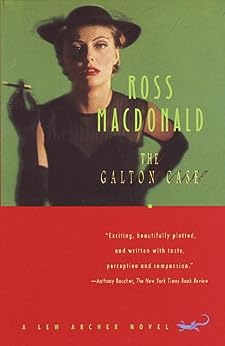 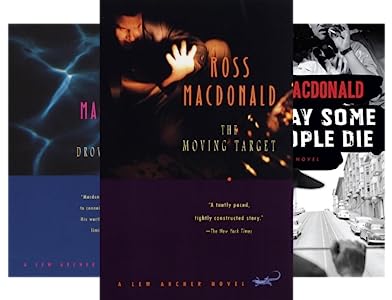 The Galton Case, published in 1959, was Ross Macdonald's breakthrough book. Its predecessors are craftsmanlike, highly literate, hard-boiled detective stories; The Galton Case and most of its successors are literature that happens to inhabit the detective-story form. For Macdonald the man, Galton was the first book in which he explored his deepest personal concerns (he was the child of a broken home who was passed from relative to relative in his youth). For readers, it's the book in which he first perfected the balancing act that became his trademark: a tightly written page-turner that also probes profound themes and frequently rises to something like poetry.

The tale opens with detective Lew Archer visiting the swanky offices of a lawyer acquaintance, who engages him to hunt for a long-missing scion of the rich Galton family. Though the case seems fruitless, Archer begins digging. Soon a seemingly unrelated crime intrudes--but Archer tells us, "I hate coincidences." As he roams California (and, briefly, Nevada) following leads and hunches, he gradually uncovers a long-buried tale of deception, hatred, and the power of illusion. As usual, Macdonald can accomplish more with three lines of dialogue and a simple description than most writers can in three pages. The connection between Archer's two cases finally clicks about three-quarters of the way through the book, and the moving denouement, with its final plot twist, takes place in a hardscrabble Canadian boarding house much like those in which Macdonald spent parts of his childhood. The Galton Case is an exceptionally satisfying read on several levels. --Nicholas H. Allison
--このテキストは、kindle_edition版に関連付けられています。

Ross Macdonald (1915-1983) was the pen name of Kenneth Millar. Born near San Francisco but raised in British Columbia, he returned to the United States as a young man and published his first novel in 1944. For over twenty years he lived in Santa Barbara and wrote mystery novels about the fascinating and changing society of his native state. He is widely credited with elevating the detective novel to the level of literature with his compactly written tales of murder and despair. His works have received awards from the Mystery Writers of America and of Great Britain, and his book The Moving Target was made into the movie Harper in 1966. In 1982 he was awarded the Eye Award for Lifetime Achievement from the Private Eye Writers of America.

Grover Gardner is an award-winning narrator with over eight hundred titles to his credit. Named one of the "Best Voices of the Century" and a Golden Voice by AudioFile magazine, he has won three prestigious Audie Awards, was chosen Narrator of the Year for 2005 by Publishers Weekly, and has earned more than thirty Earphones Awards.

Anthony Galton disappeared almost 20 years ago. Now his aging--and very rich--mother has hired Lew Archer to bring him back. What turns up is a headless skeleton, a suspicious heir, and a con man whose stakes are so high that someone is still willing to kill for them.
--このテキストは、kindle_edition版に関連付けられています。

Ross MacDonald is very important to me. I love the Lew Archer books (James Ellroy)

J. H. Bretts
5つ星のうち5.0 Classic private eye fiction that hasn't dated
2012年10月25日に英国でレビュー済み
Amazonで購入
Penguin is to be congratulated on bringing this and other Lew Archer novels back into print. Although published in 1950 Ross MacDonald's take on the private eye genre has stood the test of time. MacDonald's prose is lean,crisp,and vivid - and all his characters, no matter how minor, are sharply observed and real, not black and white cliches. The Galton Case sees Lew Archer searching for the vanished heir of a California fortune and the plot is full of twists and turns that take you by surprise - and the surprises keep coming. Very impressive and highly recommended.
続きを読む
4人のお客様がこれが役に立ったと考えています
違反を報告
レビュー を日本語に翻訳する

Ambrose (Derbyshire)
5つ星のうち4.0 Really enjoyed it. What a find this author is for ...
2017年4月28日に英国でレビュー済み
Amazonで購入
Thought this was well up to MacDonald"s usual standard. Really enjoyed it. What a find this author is for me, having been an ardent Chandler
fan for so many years and constantly bemoaned the fact that he wrote so few full length novels. The taut plotting, the noir narrative in the first person
and the sometimes hilarious wit that we associated with Chandler's Marlowe is all there. What a breath of fresh air, after being unimpressed by so many modern crime writers (even best-selling ones) that I have tried. Im working my way through MacDonald books at quite a pace. As with Chandler, when I have read them all, I plan to start all over again!
続きを読む
1人のお客様がこれが役に立ったと考えています
違反を報告
レビュー を日本語に翻訳する