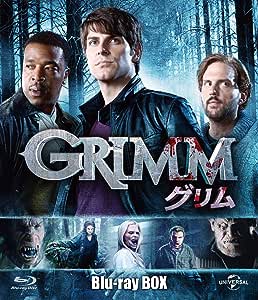 Mr. Coyne
5つ星のうち4.0 Good first try will do better?
2016年6月14日に英国でレビュー済み
Amazonで購入
OK I took a punt on this and I am Happy I did

Mr. D. L. Rees
5つ星のうち4.0 ENTERTAINING BEASTLY FARE
2013年1月18日に英国でレビュー済み
Amazonで購入
In Portland a shock for cop Nick. Dying Aunt Marie confides they are both Grimms, he now about to possess her powers - ability to detect beasts in human form. Her trailer is crammed with evidence how descendants of the Brothers Grimm continue to identify the foes. Neatly labelled and stacked are weapons, potions, etc. for dealing with them.

Cue for a police series with a difference - Nick striving to keep his secret from colleagues and partner, vet Juliet. Quickly he discovers how several such creatures are now peaceful and keen to co-exist. Others, however, have grown even more menacing, seeing Nick as a threat to be eradicated.

Twenty two episodes crammed with special effects, gore (and, it must be confessed, the ringing of phones). David Giuntoli is likeable as Nick, Silas Weir Mitchell great fun as his unlikely ally. At first some viewers may find everything a little too way-out but the series steadily takes hold, ending with so many cliffhangers that Season 2 is now eagerly awaited.

Bonuses include an interesting feature on the creation of monsters. Tight filming schedules did not permit actors spending hours in make-up. Instead technical wizardry has creatures emerge from their human covering.

Outstanding episodes? There are quite a few actually. Those Grimm Reapers are appropriately unnerving. For many the rats may long be remembered.

Recommended to those who enjoy macabre escapism.

G. Stephenson
5つ星のうち5.0 A GREAT NEW SERIES!
2012年11月8日に英国でレビュー済み
Amazonで購入
A lot of people are comparing this excellent crime/fantasy show with the other fairy tale themed drama ONCE UPON A TIME, and while I think I prefer the latter, GRIMM is still an amazing and thoroughly entertaining show. From the makers of BUFFY THE VAMPIRE SLAYER and its spin-off ANGEL, this is a darkly comic and occasionally scary tale. I love how it combines the fantasy of ONCE UPON A TIME, the crime of CSI and the dark humour of BUFFY, to make one heck of a show!

Episode 1 -PILOT- This episode didn't pack much of a punch in the action department, but it had clever plot lines, intelligent jokes and characters that are instantly likeable. The pacing was a bit all-over-the-place, but it wasn't too big a problem. The villain was also rather entertaining! A fantastic first episode! 9.5/10

Episode 2 -BEARS WILL BE BEARS- Even better than its predecessor, BEARS WILL BE BEARS is funny, intense and features a well-crafted storyline. I was gripped from start to finish and I can't wait to see how the third episode turns out! 10/10

Episode 3 -BEEWARE- This episode was a little bit of a let-down, but I still liked it a lot. It was a little dull and had problems with pacing, but the villain was fantastic and there was once again a great storyline. 8.5/10

Episode 4 -LONELY HEARTS- The worst chapter yet, the fourth episode was only really saved from being a mess by its hilarious jokes and good acting. Other than that, the story was stupid and cliche and the villan...ugh. 6/10

Episode 5 -DANSE MACABRE- A massive improvement over the previous two episodes, DANSE MACABRE had unique characters, a strong plot and a fantastic ending! 10/10

Episode 6 -THE THREE BAD WOLVES- Another great episode, this sixth chapter had some intense and well shot action scenes and an intelligent plot. PERFECT! 10/10

Episode 7 -LET YOUR HAIR DOWN- An emotional storyline, strong characters and an ending that showed how much heart GRIMM has! 10/10

Episode 8 -GAME OGRE- While I didn't enjoy it as much as the last few episodes, GAME OGRE was still a witty, highly entertaining episode that had me on the edge of my seat all the way through! There was also an exciting, action-packed ending and an original villain! 9.5/10

Episode 9 -OF MOUSE AND MAN- My favourite episode so far! It featured about four different storylines, all of which were thoroughly interesting. The acting was as usual top notch, and the main crime was fantastic and brought back memories of CSI. It was also well-paced and contained some fantastic character development! 10/10 for sure!

Episode 10 -ORGAN GRINDER- I'm so glad I didn't abandon this series after the very unimpressive fourth episode because this show is amazing! This episode was funny, gory and entertaining! 9.5/10

Episode 11 -TARANTELLA- Another great episode! It featured a fantastic villain, brilliant acting and a brilliant ending! Amy Acker was predictably amazing as the main villain! I really enjoyed TARANTELLA! 9.5/10

Episode 12 -LAST GRIMM STANDING- While it wasn't my favourite episode, I still liked the twelth episode of GRIMM season 1. The storyline didn't interest me much, but I liked the ending and there was some brilliant dialogue! 7.5/10

Episode 14 -PLUMED SERPENT- Danielle Panabaker was perfect as one of the villains in this epic episode! I didn't think it was a masterpiece and there were one or two flaws, but there not even worth talking about! A thoroughly enjoyable and surprising episode! 9.5/10

Episode 15 -ISLAND OF DREAMS- A new character was introduced in this interesting episode, and I instantly found her likeable! The plot could have been a bit more gripping in my opinion, but it still made for great TV! 9/10

Episode 16 -THE THING WITH FEATHERS- Possibly my favourite episode of the series so far, this chapter was funny, tense and original and had some brilliant character development, especially between Nick and Juliette. There were some gross scenes though! 10/10

The box looks great and is reasonably sturdy.

Capt.SamVimesUK
5つ星のうち5.0 Grimmsters Will Not Be Disappointed…
2014年6月6日に英国でレビュー済み
Amazonで購入
If like me you got on the "crazy train" of Grimm late, (thanks Watch® TV on sky for running seasons 1 & 2 back to back!) Otherwise I'd have been even later to 'woge' into a Grimmster. The Blu-ray the picture transfer is excellent and the surround sound system has been having a work out too. I've not got to extras yet I'm reliving season 1 whilst watching season 3 on TV. I don't review the subject matter as, I feel, unless you're a fan or buying for one you know what's going on… plus I've had run-ins with trolls giving me abuse as I've offended their opinion of a film or TV show (tough sh*#) so no more, I just review the products now no critique(ing) of the material.

I just review the product. The set does have some nice touches like the title on the top and bottom of the case it's trivial but if you have some discs 'end on' you can, with Grimm, see what it is! This is worth the money. I've paid twice as much and got half the product in the past. This is quality, for Blu-ray Disc set, which isn't a limited edition.
続きを読む
2人のお客様がこれが役に立ったと考えています
違反を報告
レビュー を日本語に翻訳する

Willy Eckerslike
5つ星のうち5.0 Original, witty, clever and engaging.
2012年12月26日に英国でレビュー済み
Amazonで購入
There are very few new angles on the vampire / monster / supernatural fantasy genre and the police drama genre is completely saturated. What has never been done is combining the two and, thanks to an excellent writing team, it has been done hugely successfully. Each episode is a loose reinterpretation of a Grimm fairy tale and while the majority of them are stand-alone there is usually also a little clue to a gradually developing primary plot line. Some episodes are clearly mainly concerned with the progression of this main plot and by the end of the season your appetite is nicely wetted in anticipation of season 2.

What is clear is that the team are trying very hard not to create another Buffy although much of the time you wish that Nick, our Grimm, would get on with it, meet some crusty old librarian bloke and develop some superpowers for fighting the bad guys. But then they'd be falling into the Buffy trap which would be lazy and disappointingly unoriginal. The Scooby Gang is limited to Nick and the excellent Monroe, a vegan `big bad wolf' (a bit like Angel but witty instead of soppy), although other gang members do occasionally wander into the plot to spice things up a bit and to stop it all getting a bit samey. What we learn is that not all daemon/human hybrids are bad (the Beavers are particularly endearing and nice (thanks for that immortal line, Mr. Neilsen)) so it never turns into a Buffy'esque kill fest; there is a lot more character & plot depth and the writing is cleverer than Joss Whedon ever managed in Buffy. Not that Grimm is short on wit or surprises; most episodes have some excellent `jumps' and the light, witty dialogue stops it all getting pretentiously dark & claustrophobic.

All-in-all, Grimm is superbly watch-able, memorable and original. Season one has given the writing team the opportunity to build plausible characters and give the audience a thorough grounding in the basics of the underlying mythology (much like the first season of the most excellent Fringe). We're ready now for Season Two to put more flesh on the bones of the primary plot. Splendid stuff!
続きを読む
2人のお客様がこれが役に立ったと考えています
違反を報告
レビュー を日本語に翻訳する
すべてのレビューを参照します
Amazonプライム会員ならお急ぎ便、日時指定便が使い放題
さらに、映画もTV番組も見放題。200万曲が聴き放題 。クラウドに好きなだけ写真も保存可能。
> プライムを無料で試す