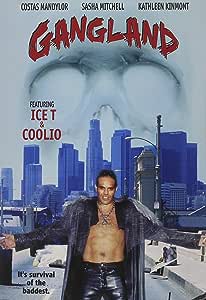 Claudette Adler
5つ星のうち3.0 Good fights
2012年11月5日にアメリカ合衆国でレビュー済み
Amazonで購入
I bought this movie for the simple fact that Sasha Mitchell is in it. Ice-T and Coolio are on the cover and both die by the first 5 minutes. I swear I saw Sam Brown(Flash Gordon)in the beginning. That is showing my age. Anyway Ice-T was over the top and in retrospective it was way funny. I don't know if it was meant to be, but it was a groaner. Sasha Mitchell shows up about 10 minutes into the movie. Him and his brother are tooling along and suddenly they are being followed by bad guys. You just know that a fight is going to happen. I am a sucker for martial arts fight scenes. Even if the movie is total crap the fight scenes are worth watching. Well my oh my the guy playing Sasha's brother can kick some major ass. I don't know who he is, but he could hold his own. Sasha himself has some very formidable skills and this is the biggest I have ever seen him. He is amazingly agile for being that pumped up. His crescent kicks and jump spin side kicks are not what I would want to be on the receiving end of, let alone his dangerous elbows. Those hurt when you get nailed with the pointy end. I really like Sasha Mitchell's acting and his laugh. He plays it pretty low key . Some of the other actors are just so over the top you have to laugh. The guy playing Lucifer is a prime example. It almost borders on hilarious. The dude playing the steroid pumped growling beast was who I was hoping that, in the end, would match up against Sasha. No, he makes it 3/4's of the way through only to get shot in the back of the head. Major bummer, and I instantly lost interest in the movie, because the 2 people left I can do without. Kathleen Kinmont might have learned martial arts when she was married to Lorenzo Lamas but she can't fight and the other guy from Picket Fences acted like he was in a coma. I love Tim Thomerson from the Dollman movies and he is seriously funny in stand-up so he does a pretty good job. All in all I had to remember that it is a DTV movie and go from there. If you like either martial arts fights or are a Sasha Mitchell fan get it. Like another reviewer said thankfully it is only 90 minutes. I probably should have stuck it out, but after Sasha dies so did my reason for watching. It is one of those movies you watch when you have nothing else to do.
続きを読む
役に立った
フィードバックを送信中...
フィードバックをお寄せいただきありがとうございます。
申し訳ありませんが、お客様の投票の記録に失敗しました。もう一度試してください。
違反を報告
レビュー を日本語に翻訳する

A. Mccurley
5つ星のうち5.0 Post-Apocalyptic Action at Its Finest
2014年4月22日にアメリカ合衆国でレビュー済み
Amazonで購入
This one was fun and at least worth a watch. It has a recommended cast and brings into focus a lot of points that could arise if Marshall Law was put into effect on major cities. Costas Mandylor (Picket Fences, the Saw franchise), Sasha Mitchell (the Kickboxer series, Step-By-Step), Kathleen Kinmont (Renegage, Halloween 4: The Return of Michael Myers) and Kristanna Loken (Terminator: Rise of the Machines, Bloodrayne) star.
続きを読む
1人のお客様がこれが役に立ったと考えています
役に立った
フィードバックを送信中...
フィードバックをお寄せいただきありがとうございます。
申し訳ありませんが、お客様の投票の記録に失敗しました。もう一度試してください。
違反を報告
レビュー を日本語に翻訳する

AvidReader
5つ星のうち1.0 Bad! Bad! Bad!
2013年1月26日にアメリカ合衆国でレビュー済み
Amazonで購入
A cheap straight to video movie that is sure not worth what it's selling for. Very much a movie for those not interested in the storyline & just wanting to watch Ice-T, I really am lost for words on this one :)
続きを読む
役に立った
フィードバックを送信中...
フィードバックをお寄せいただきありがとうございます。
申し訳ありませんが、お客様の投票の記録に失敗しました。もう一度試してください。
違反を報告
レビュー を日本語に翻訳する