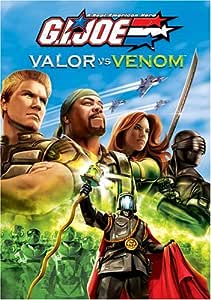 iansomniak
5つ星のうち4.0 "I hear smoked snakes is tasty this time of year!"
2007年10月30日 - (Amazon.com)
Amazonで購入
The "Real American Heroes" collectively known as G.I. Joe have left the tried-and-true world of 2D animation behind them and boldly entered the perilous realm of CGI. The fun begins when Dr. Mindbender dispatches a gang of flying robotic spiders to the Washington zoo to collect a DNA sample from a foul-tempered grizzly bear. The following morning, after an embarrassing paintball defeat in New Jersey's Tall Tree Park, General Hawk is taken hostage by the Baroness and a somewhat ridiculous looking Destro. Afterwards, Hi-Tech tosses Duke the General's Gauntlet--a revolutionary new communication device worn on the wrist and forearm--and the President informs the acting G.I. Joe team leader of a series of mass kidnappings around the world. Being the brilliant military strategist that he is, Duke quickly figures out that these mysterious abductions, Hawk's disappearance, and the animal DNA collections by the metallic airborne arachnids are all connected. The true horror of Cobra's latest evil plan for total global domination is soon revealed as we catch up with bad ol' Cobra Commander at his bioresearch facility (codename: Viper Pit) in Antarctica. The mirror-faced Commander has obviously been watching a lot of Seinfeld reruns since we last saw him, as he has developed a fondness for the phrase, "Yada yada yada." With Hawk hooked up to a Brainwave Scanner and chastising himself for eating too many spicy burritos before bedtime, Dr. Mindbender and his not-so-loyal android assistant, Overkill, give the captured General a frightening demonstration of the gruesome power of Venom--a neon-green mist that can turn mild-mannered human civilians into beastly mutant warriors. Before you can say "YO JOE," Duke has rallied his troops--including Scarlett, Dusty, Gung-Ho, Wild Bill, Flint, Frostbite and Tunnel Rat...among others--and together they embark on a do-or-die mission to find and rescue General Hawk and, hopefully, thwart the maniacally silly Commander's fiendish plot to turn all of Earth's citizens into feral Venomized soldiers.

Although it certainly doesn't compare to the greatness of the classic 1980's series, `Valor verses Venom' is a surprisingly enjoyable new adventure with a generous helping of nostalgia thrown in to satisfy Sunbow fans. The plot is very reminiscent of the Serpentor saga, and several familiar characters are prominently featured--albeit with different voices. Some new characters are obviously based on old characters. Slice and Slash talk in unison, ala Tomax and Xamot, and Heavy Duty is probably related to Roadblock. The CGI work falls far short of Pixar standards--clothing looks heavy and overly textured, faces look like rubber, and all the females are kind of ugly with hair that resembles fat strands of yarn--but the vehicles and backgrounds look great and everything is very colorful and meticulously detailed. Ninja aficionados will be enthralled by duels between the legendary Snake Eyes and his perpetual nemesis, Storm Shadow...as well as the anime-esque subplot involving the golden-hooded Kamakura and his uncooperative mystic sword, the Tatsu Ashi (a.k.a. Dragon's Tooth). And exciting action scenes like the thrilling motorcycle chase over the rooftops of the Joes' Command Center and Kamakura's subsequent slow-motion attack on a Night Adder are sure to please. Plus, there's plenty of delightfully corny dialogue like: "Overkill's gone MAD!" "Well, at least he isn't boring."

The valorous/venomous disc comes equipped with an arsenal of interesting extras, such as: a `Making Of' featurette; drawing board to film comparison; a music video; and an in-depth guide to the wildly popular G.I. Joe trading card game. The back of the case lists a PG rating but I'd call this a G `cause there's no blood or bad language, just some good old fashioned red and blue laser beams. Order your copy ASAP. Yo Adrian...I mean, JOE!

"I will never leave you to fend for yourself. Trust me to stand behind you. I'm your glory unseen."

BlasterBlastinAtYa
5つ星のうち5.0 Awesome new chapter in the rich Gi Joe history
2004年10月19日 - (Amazon.com)
Amazonで購入
This movie will be enjoyed by kids, most Gi Joe fans as a whole and even anyone who is just fond of great animation. The CGI is the best I have ever seen in any US made movie. There will be some who will not like this and those people are the "fans" who are too narrow-minded to accept Gi Joe in new times and that it's not 1985 any more. Anyone who says "this can't compare to the Sunbow series" just simply doesn't get the idea that it's not supposed to compare. It's an entirely differnt time.

The storyline on the surface can seem a little silly, but the writers have done an excellent job of putting the Valor Vs. Venom story to the screen. Mucho kudo to all the writers and animators. I personally liked Spy Troops as well, but this movie leaves it in the dust. Advice to anyone, buy the movie. If you're hesitant, check out your local video store and rent it. You are in for a treat and an awesome film.
続きを読む
レビュー を日本語に翻訳する

A. Sanderson
5つ星のうち4.0 Not that bad
2006年1月14日 - (Amazon.com)
Amazonで購入
I bought this for my son who is five, he loves the movie and watches it daily while playing with his G.I. Joe figures. If your expecting to see something that resembles the original cartoon series then you will be disapointed, but overall it really isn't that bad. It has a positive message for kids, eventhough it does show some mild violence later on in the movie. For an adult it's really boring but it keeps my child interested and that's pretty difficult to do with a young child!
続きを読む
2人のお客様がこれが役に立ったと考えています
レビュー を日本語に翻訳する

Michael Paul
5つ星のうち5.0 Animated CGI Films
2011年3月9日 - (Amazon.com)
Amazonで購入
I am a big fan of the G.I. JOE series and I grew up in the 80's and I had G.I. JOE action figures and this film just brought those childhood memories back and it has an awesome storyline and an excellent amount of actors playing the voiceovers of the familar characters. It's a film fun for any age that wants to let the kid out some week night or saturday morning.
続きを読む
レビュー を日本語に翻訳する
Amazon.comのカスタマーレビューを見る(40) 5つ星のうち4.1
Amazonプライム会員ならお急ぎ便、日時指定便が使い放題
さらに、映画もTV番組も見放題。200万曲が聴き放題 。クラウドに好きなだけ写真も保存可能。
> プライムを無料で試す