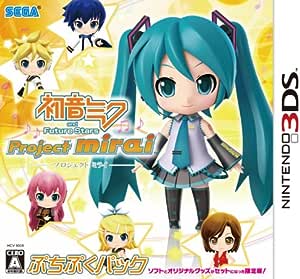 M Ralph
5つ星のうち2.0 CARE does not work on all UK 3ds
2016年4月22日に英国でレビュー済み
エディション: 限定版Amazonで購入
Would not work on a UK 3ds, previous reviews did not indicate that this was so and neither did the advert. Beware if you have one of the later model 3ds.
続きを読む
違反を報告
レビュー を日本語に翻訳する

A. L.
5つ星のうち5.0 Mind crushing cute
2013年1月14日にアメリカ合衆国でレビュー済み
エディション: 限定版Amazonで購入
This game is really great,some of the Vocaloid characters(Miku, Luka, Kaito, Meiko, Len and Rin)have been turned into Chibi's
(Chibi's are small and cuter versions of manga characters)this game has the same goal as Project Diva.
of course there are a lot of different songs like the famous 'daughter of evil' from Rin and Len kagamine or 'no logic' from Luka Megurine.
And the details and graphics are even better than the ones in Project Diva.

For the people who don't know about Project Diva: The goal is to finish all the levels, in this game you play the levels by pressing either a,b,y or x at the moment they appear in a circle. you cant just start pressing buttons like a maniac, there is a sort of arrow turning around in the circle, when it points at x you have to pres x. That's with all the letters and on the back ground one of the characters is dancing and singing(you can hear the song, otherwise it would become boring after a while). At some songs when you finished them all you can change character and or change the character's clothing(one of the boys is pretty good at Miku,Rin and Meiko's cheer lieder song)

Puchi Puku pack extra's?
The extra's of the Puchi Puku pack is that you get a Hatsune Miku figurine, a Hatsune Miku stuffed ball, a Project Mirai bag
(the bag is pretty small, Its best not to put your 3DS in it)some stickers(of Miku,Luka,Kaito,Meiko, Len and Rin)
and of course the game Project Mirai.
続きを読む
6人のお客様がこれが役に立ったと考えています
違反を報告
レビュー を日本語に翻訳する