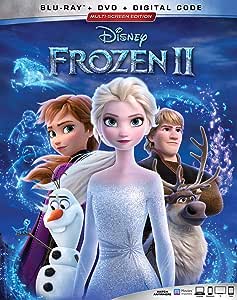 jww
5つ星のうち4.0 Fantastic looking fantasy film
2020年1月29日 - (Amazon.com)
I enjoyed myself with this one.

First off, this is one of the BEST looking animated movies of all time. It is simply gorgeous looking. The visuals have an excellent use of color and nature. I love that they decided to set this in autumn, which is something you don't often see in animated films. In contrast to the more traditional fairy tale look of the last film, this one is far grander looking. The appearance of the kingdom of Arendelle in this makes the original look so-so.

Frozen II feels so different from any other Disney animated film. There are plenty of those that do fantasy, but this is the first one (except maybe for The Black Cauldron) to go for EPIC fantasy. I really loved the various legitimately challenging magical forces the characters have to deal with.

The story looks into how Elsa (voiced by Idina Menzel) has her powers and I really liked the setup and the messages they were trying to tell. This is actually one of the more serious Disney animated films. (By their standards. Don't worry there's still plenty for your kids to love.) There are a couple surprisingly dark, dramatic moments. (Again, by Disney standards.)

Based on the trailers, I was afraid that comic relief Olaf the snowman (voiced by Josh Gad) wouldn't fit into the change of tone on account of being too light, but the writers adapted the character really well. They have him growing up and being far more philosophical about the world (while still being pure). His musings often steal the show. I actually thought he was funnier in this than the last film.

I did think this movie had some pacing issues. The plot just isn't as tight as the first one. There are moments where the writer didn't know how to best utilize the main characters. I do wish they spent more time interacting with a couple of the film's likable but underused new supporting characters.

Songs are decent but aren't on the same tier as the last film. Half are just okay. The song Into the Unknown tries too hard to be the new Let it Go. Still, I give the songwriters credit for going with a new style not found in previous Disney films. I liked Show Yourself, Lost in the Woods, and All is Found. The last one is a particularly lovely piece.

This isn't quite as good as the original, which knew more what it wanted to be and had a stronger emotional backbone. Still, this has a lot going for it and I think your kids will like it.