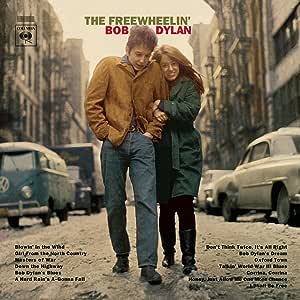 Dylan's outstanding second album is a tremendous jump from its predecessor. Whereas the debut established him as a peerless interpreter of folk and country-blues classics, and a singer like none before, this followup features some of the most pungent original songs of the '60s. "Blowin' in the Wind," "Masters of War," "A Hard Rain's A-Gonna Fall," "Don't Think Twice, It's All Right," "I Shall Be Free": if this sounds like the lineup for a greatest-hits collection, you've got the idea. Nat Hentoff's liner notes are charmingly dated, but Dylan's idiosyncratic singing, unexpected lyrics, and inimitable guitar and harmonica playing are as immediate and relevant as whatever you heard on the radio today. (As great as this is, there's much more: a handful of top-rank outtakes from Freewheelin' appear on the Bootleg Series box set.) --Jimmy Guterman

The Punk Panther
5つ星のうち5.0 Where have you been my blue-eyed son...
2018年8月19日に英国でレビュー済み
Amazonで購入
After a debut album that included only two original compositions, Bob Dylan effectively launched his singer/songwriter career from here. He still used traditional folk melodies but now he added his own unbelievably mature, prophetic and wise beyond his years lyrics. The cultural impact of this album simply cannot be overstated. Some of the songs on here became synonymous with the early sixties, the burgeoning folk scene, particularly in New York's Greenwich Village, and with an increased need in the young and intelligent to protest.

The songs embraced the Civil Rights movement, political corruption and the omnipresent early sixties paranoia about impending nuclear war. He also had love songs on here, but they were not "moon in June"/"baby I love you" odes - they were often cynical, bitter and accusatory, something continued for a fair few years. As fetching as the picture is on the front cover, I have always felt sorry for poor old Suze Rotolo, who must have been on the receiving end of Dylan's acerbic tongue on many occasions.

"Blowin' In The Wind" is, of course, an absolute classic, and has been recorded by many other artists, including Peter, Paul & Mary, Stevie Wonder and Neil Young. It is the daddy of all anti-war protest songs, articulating beautifully and starkly against an acoustic background Dylan's fears for the world's future. The line "how many years can some people exist before they're allowed to be free..." perfectly aligned the song with the Civil Rights movement too. Quite simply, this song, written by a twenty-one year-old, is one of the greatest songs of all time. The incredibly bleak "Masters Of War" is another whose subject is hard-hitting and obvious, although the apocalyptic "A Hard Rain's A-Gonna Fall" is a mysterious journey through all manner of imagery, biblical, poetic, mythological. It is a work of inspired genius.

Other classics are the vitriolic, leaving his lover song in "Don't Think Twice, It's Alright", the far more yearningly, atmospherically beautiful "Girl From The North Country" and the excursions into the blues tradition of the folky, harmonica-driven "Bob Dylan's Blues", "Down The Highway", "Corinna Corinna" and the old blues cover of "Honey, Just Allow Me One More Chance". The pure folk tradition is there in "Bob Dylan's Dream" and "Oxford Town". "Talking World War III Blues" shows Dylan's black humour at its most obvious, but, for me, it it has always been slightly irritating and dated.

As I mentioned earlier the impact of this remarkable album and its songs was immense, but, as someone who owns all Bob Dylan's albums, I rarely play it. I much prefer subsequent live, often bluesy or electric live versions performed by Dylan of the songs, or indeed, covers of them by different artists. Check out Dylan's storming full band, rocking version of "Masters Of War" on "Real Live". It completely transforms the song. The same applies to many of his versions of "Don't Think Twice", or Neil Young's blistering "Blowin' In The Wind".
続きを読む
9人のお客様がこれが役に立ったと考えています
違反を報告
レビュー を日本語に翻訳する

It Wasn't Always An Easy Ride For Mister Zimmerman....
As Far As The Vinyl-Issue Of This LP Goes..
COLUMBIA Records Had A Press Release That Indicated That Bob Had To Wait " Just Over Ten Years " To Be Awarded A Gold Disc For " The Freewheelin' Bob Dylan "
( For COLUMBIA Records This Met Sales Of 500,000 Units Of An LP. However, Some Labels Issued Gold Discs For More Or Even Less Sales For An LP - The R.I.A.A. Did Have Specific Guide-Lines ** )
** DUNHILL Records Often Issued Gold Discs For Singles That Sold 800,000 Units Often Stating That They Were " Million-Sellers " However, To Be Fair, Most DUNHILL Singles That Had This Type Of Award, Had Hits That Eventually Sold Well Over A Million Or More...

By The Time Bob Received This Award, He Had Already Re-Invented Himself And Had " Gone Electric " And Virtually Had Become A House-Hold Name With Huge LP Sales From 1965 Onward.
Then Again, Prior To This Period, Only The " Tuned-In " Knew Who Bob Was.

In Early 1963 At Santa Monica High School, Our Government Class Was Involved In Discussions Relating To Any Influence(s) That " Communist Folk Singers " Had On The Young Attending Classes On U.S. Campuses.
Our Teacher Made It Known That She Loved Trini Lopez ( He Was Getting To Be A Pretty Hot Property Then )
But AS Far As Any " Folk / Protest " Singers Went,....She Didn't Think Much Of Bob " Dielin " .

The " Beat-Nicks " And " Folkies " Down In Venice Knew Who Bob Dylan Was, And That's Where I First Heard Him On Record, At A Small House At 49th & Speedway Where ,As I Thumbed Through The LPs, ...
I Found Were As By Peter,Paul And Mary, The Rooftop Singers, And The Kingston Trio And Bob Dylan.
( At That Same Gathering Was A Guy With A Guitar And A Strange High-Pitched Voice, Along With A Black Bongo Player Who Accompanied Him When He Sang His Versions Of " Folk " ....People Called Him " Buckley " )
A Few Years Later, Just A Few Doors Down, Resided People Such As Janis Joplin And Stephen Stills.
So Much For A Short " History " Of Venice ( California ) Jim Morrison Liked It There Too...Name-Dropping Eh ?
Now, Those Very Same Properties ( Or Where They Once Stood ) Sell For Massive $$$...

This Is Early Bob Dylan At His Pre-Electric Best ( Before Joan Baez Called Him " A Fake, A Phoney, And A Fraud " )
COLUMBIA Must Have Known They Were On To Something, And Thanks To Producer John Hammond, Bob Continued His Long Association With The Company, And ( With A Few Exceptions ) Released That Many LPs That Are Now Considered To Be His Finest Work To Date.
( Thanks To Whatever Higher-Power, The Infamous Head Of A&R, The Pop-Rock-Folk Music Hater- Mitch Miller, Could Not Prevent Bob Signing With COLUMBIA Records, Though Mister Miller Tried )

For Some Reason, Whatever Method Of Audio Reproduction, Bob Dylan Is One Of The Very Few Acts, That I Can Play Anytime, Anywhere, Acoustically, And / Or " Electric " And The Tracks Never Sound ' Dated '.

Though " Star " And " Super-Star " And All Of The Rest, Are So Oft Applied ( Often To Those Un-Deserving Of Such )
There Is One Word That Can Only Be Said Of A Few, Such As Bob Dylan....Unique !
続きを読む
2人のお客様がこれが役に立ったと考えています
違反を報告
レビュー を日本語に翻訳する

Dylan fan
5つ星のうち5.0 Still a must after all these years
2018年4月16日に英国でレビュー済み
Amazonで購入
The album that started it all! 1963! A friend played me this (I still hadn't heard his first, somewhat tentative album) & it was something of a musical epiphany for me. It was the first time I'd heard songs addressing social issues & not just dealing with love relationships, though there are the latter on here too ('Girl from the north country' & 'Don't think twice, it's alright' being the two main ones). Of course, since hearing this I got to listen to the likes of Woody Guthrie & the great blues singers & realized there were others before Bob who sang about wider issues than man-woman relationships...but he was the first for me. Everyone knows how much Bob developed over the decades, sometimes annoying purists who wanted him to stay some sort of 'spokesperson' for his generation which he never was. There are other equally brilliant Dylan albums, all in different ways, but with tracks like 'Blowin' in the wind', 'Oxford town' & 'A hard rain's a-gonna fall', this remains an essential.
続きを読む
3人のお客様がこれが役に立ったと考えています
違反を報告
レビュー を日本語に翻訳する

Sentinel
5つ星のうち5.0 Dazzling Dylan.
2020年9月14日に英国でレビュー済み
Amazonで購入
I bought this as I'd heard it was a good re-mastering job, and because it features some of my favourite & powerful Dylan songs: 'Hard Rain; 'Blowin' in the Wind'; 'Masters of War', and 'Don't Think Twice'. Throughout, the sound quality is excellent, so that all the music here, not just my favourites, sound newly minted. Lovely stuff.
続きを読む
違反を報告
レビュー を日本語に翻訳する

M. Jones
5つ星のうち4.0 Music on Vinyl Review
2014年2月5日に英国でレビュー済み
Amazonで購入
Music on Vinyl releases are almost always very well pressed. The sound quality is very good although they do sound a little clinical in comparison to true analogue releases. the bass has a dry tight sound which robs the music of weight. I'll still buy them now and then but I won't expect them to blow my mind. They are good source of vinyl though, as some of the re-releases from the proper audiophile vinyl companies are far too expensive now (e.g. Analogue Productions, Mobile Fidelity). I'm sure if they reduced their prices they would recoup any losses in higher sales volumes and give more music lovers the pleasure of hearing their great releases.
続きを読む
4人のお客様がこれが役に立ったと考えています
違反を報告
レビュー を日本語に翻訳する
すべてのレビューを参照します
Amazonプライム会員ならお急ぎ便、日時指定便が使い放題
さらに、映画もTV番組も見放題。200万曲が聴き放題 。クラウドに好きなだけ写真も保存可能。
> プライムを無料で試す