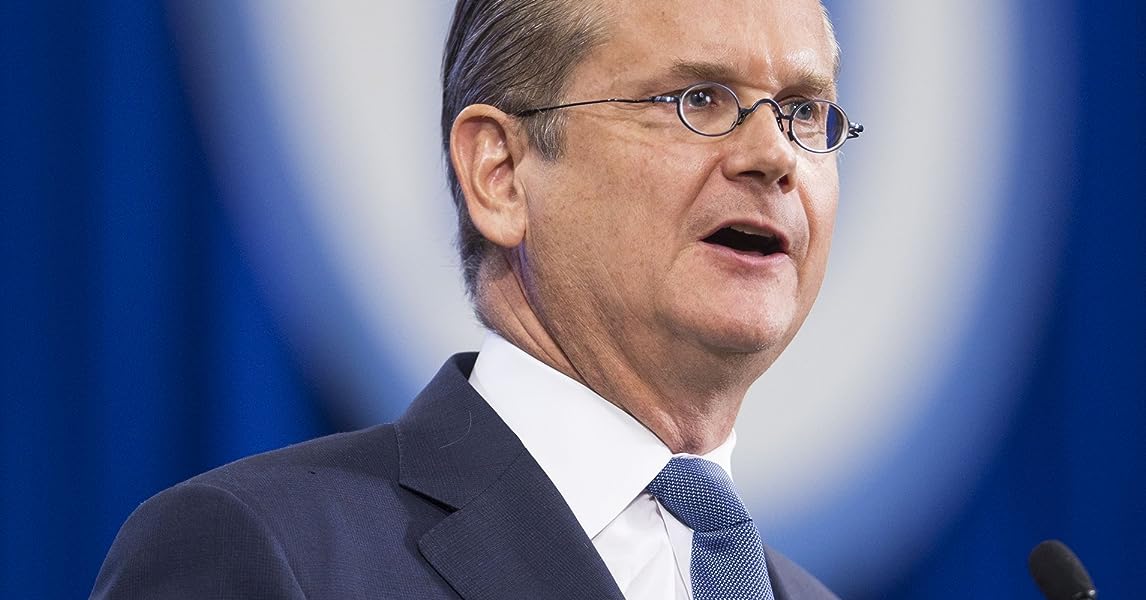 "An entertaining and important look at the past and future of the cold war between the media industry and new technologies." —Marc Andreessen, cofounder of Netscape

Jon Else is a documentary filmmaker, who has been very successful in spreading his art. He is a teacher of other filmmakers and, as a teacher myself, I envy the loyalty and admiration he has built in his students. (I met, by accident, two of his students at a dinner party. He was their god.)

Else worked on a documentary that I was involved with. At a break, he told me a story about the freedom to create with film in America today.

In 1990, Else was working on a documentary about Wagner’s Ring Cycle, and the story was to be told by the stagehands at the San Francisco Opera. Stagehands are a particularly funny and colorful aspect of opera. During a show, they hang out below the stage in the grips’ lounge and in the lighting loft. They are a perfect contrast to the art on the stage.

In the course of one of these performances, Else was shooting some stagehands playing checkers. In the corner of the room, there was a television set. Playing on the television set, as the stagehands played checkers, as the San Francisco Opera played Wagner, was The Simpsons. And as Else judged it, this touch helped capture the oddness of the scene.

Else knows Matt Groening, so he called Groening’s office to get permission. Groening said, “Sure, use the shot.” The shot was a four-and-a-half-second image on a tiny television set in the corner of the room. How could it hurt? Groening was happy to have it in the film, but he told Else to contact Gracie Films, the company that produced The Simpsons.

Gracie Films was okay with it, too, but they, like Groening, also wanted to be careful. So they told Else to contact Fox, Gracie’s parent company. So Else called Fox and told them about the film and told them about the four-and-a-half-second clip in the corner of the one shot. Matt Groening had already given permission, Else said. He was just confirming the permission with Fox.

Then, as Else told me, “two things happened. First we discovered…; that Matt Groening doesn’t own his own creation—or at least that someone [at Fox] believes he doesn’t own his own creation.” And second, Fox “wanted ten thousand dollars as a licensing fee for us to use this four and a half seconds of…; entirely unsolicited Simpsons, which was in the corner of the shot.”

Else was certain there was a mistake. He worked his way up to the someone he thought was a vice president for licensing, Rebecca Herrera. And he said to her, “There must be some mistake here…;.We’re asking for your educational rate on this.” That was the educational rate, Herrera told Else. A day or so later, Else called again to confirm what he had been told.

“I wanted to make sure I had my facts straight,” he told me he told her. “Yes, you have your facts straight,” she said. Ten thousand dollars to use the clip of The Simpsons in the corner of a short in a documentary film about Wagner’s Ring Cycle. And then, astonishingly, Herrera told Else, “And if you quote me, I’ll turn you over to our attorneys.” As an assistant to Herrera told Else later on, “They don’t give a shit. They just want the money.”

Else didn’t have the money to buy the right to replay what was playing on the television backstage at the San Francisco Opera. To repeat that reality was beyond the documentary filmmaker’s budget. And thus, at the very last minute before the film was to be released, Else digitally replaced the four and a half seconds of The Simpsons with a clip from another film he had worked on—The Day After Trinity. Only problem was that when Else shot the sequence at the San Francisco Opera in 1990, The Day After Trinity had not yet been made.

We live in a free society—built between the bulwarks of free speech and the prosperity of a free market. Yet the culture of that culture—once a free culture—is changing. We are moving from this free culture, where artists and creators and critics could build easily upon our past, to a permission culture, where the right to use what is all around us depends upon the permission of an increasingly small few.

This is a profound change in our culture.  It is the product of changing law and changing technology. Unless it is reversed, it will remake who we are and how we build our culture.

Lawrence Lessig is a professor at Stanford Law School and the founder of the Stanford Center for Internet and Society. The author of The Future of Ideas and Code and Other Laws of Cyberspace, he is the chair of the Creative Commons project. A graduate of the University of Pennsylvania, Cambridge University, and Yale Law School, he has clerked for Judge Richard Posner of the U.S. 7th Circuit Court of Appeals and Judge Antonin Scalia of the U.S. Supreme Court.
続きを読む

J. Smith
5つ星のうち5.0 he said it all
2009年2月4日に英国でレビュー済み
Amazonで購入
This will educate you and open your eyes....it is one of the cheapest but innovative version of the story of copyright culture which has grown out of control. Originally intended to protect the artist this law is now being used to keep the pockets lined of fat multinational conglomerate companies. Whilst criminalising alot of children, the law has failed to respond to changes in technology such as the internet which has allowed for new forms of creativity which have made the old laws insubstatial.
It recognises a shift from when the laws were created with a balance to protect businesses but also the people.
Laws that protect the interest of large businesses have been pushed into evolution by pressure from these firms, but those to protect the people are not. And remain unchanged and therfore unequipped to protect those it was originally created to protect. Where does this leave us?

Chris Buckingham
5つ星のうち5.0 Lessig at his best?
2010年11月2日に英国でレビュー済み
Amazonで購入
This is possibly Lessig at his most dazzling.
Superb read from cover to cover.

Luis Silva
5つ星のうち1.0 Product is Great!
2014年4月28日に英国でレビュー済み
Amazonで購入
It was the last buy I did before Amazon have changed policies postage to Europe. Today would be vastly more expensive to Portugal, even twice the price. If i want to buy another now would be impossible and i would like to do it. Lawrence Lessig go to another webstore for a buy more things from you..

Thanks for your atention...

Clay D.
5つ星のうち2.0 Sloppy Printing
2018年10月8日にアメリカ合衆国でレビュー済み
Amazonで購入
All the charts are missing, there are glaring omissions of statistics, and the formatting is odd. This printing was the result of the bare minimum of effort. It’s like they copied and pasted, clicked merge formats and then never bothered to edit. Italics from book titles are missing, so are quotation marks. This book is a mess
続きを読む
2人のお客様がこれが役に立ったと考えています
役に立った
フィードバックを送信中...
フィードバックをお寄せいただきありがとうございます。
申し訳ありませんが、お客様の投票の記録に失敗しました。もう一度試してください。
違反を報告
レビュー を日本語に翻訳する

D. Garza
5つ星のうち5.0 Prepare to be horrified!
2011年6月30日にアメリカ合衆国でレビュー済み
Amazonで購入
Excellent book that shows how copyright laws in the country have become more of a barrier to the creative world rather than a tool that drives innovation. Lessig offers a mostly balanced argument about why copyright needs to be reformed, however this may do little sway hardcore, intellectual property extremists.

If you don't believe in the original ideas that the framers had in mind when copyright laws were drafted, you won't be able to follow Lessig's argument. Some believe that ALL property is absolute and that intellectual property should be no different, regardless of the reasons that we have for limiting the reach and scope of our intellectual property rights.

Jonathan Brown
5つ星のうち5.0 Good, current and readable
2004年9月5日にアメリカ合衆国でレビュー済み
Amazonで購入
This is the third in a series of books by Professor Lessig. The Future of Ideas and Code were excellent in setting the context of the debate about intellectual property. But this book adds to those significant contributions.

The author has an interesting ability to bring in anecdotes that enliven his narrative. He also is able to relate in somewhat painful detail his intervention in the Ellred case - where the Supreme Court denied the ability of a person to publish a poem - that by any reasonable standard should be in the public domain. He discusses the role of Jack Valenti (MPA) and the RIAA in trying to alter the balance of interests between the producers and the consumers of ideas.

Finally, professor Lessig makes two more sets of contributions that are important to help us understand the dynamics of an arcane issue. First, he does a great job at setting the context for the debates about intellectual property - some of this builds on what was written in his two earlier books - but it is valuable none-the-less. Intellectual property and physical property are not the same and should probably not be considered co-equal under the law.

At the same time he makes a great set of suggestions about how to balance the rights of producers of ideas and consumers.

The original debate that got Americans concerned with these issues began between James Madison and Thomas Jefferson who argued over the appropriate scope of the "progress clause" in the Constitution. Lessig follows in that great tradition and adds to our knowledge.

Robert
5つ星のうち5.0 Surprisingly entertaining for a book about intellectual property law
2012年7月20日にアメリカ合衆国でレビュー済み
Amazonで購入
This book is great eye opener to today's world of copyright law. Lessig shows how perpetual copyrights and corporate lawyers are destroying the future of culture. It is also surprisingly entertaining for book centered around intellectual property law, even humorous at times. It includes a narrative of Lessig's own case with the Supreme Court, and how and why it failed. I would recommend to anyone interested in learning about copyright.
続きを読む
5人のお客様がこれが役に立ったと考えています
役に立った
フィードバックを送信中...
フィードバックをお寄せいただきありがとうございます。
申し訳ありませんが、お客様の投票の記録に失敗しました。もう一度試してください。
違反を報告
レビュー を日本語に翻訳する
その他の国際レビューを読み込む

RavenB&W
5つ星のうち4.0 Free Mickey
2008年4月7日にアメリカ合衆国でレビュー済み
Amazonで購入
This is a must read as the issues that Lessing addresses have implications that go way further than the entertainment industry. I agreed with almost all of his argument although I did find at some point he was pushing it BUT overall he makes a righteous argument and I choose that word "righteous" carefully. This is an issue that effects all of us in everything from education to health care and his arguments resonate in these times of wars for oil and legalized dope dealing by the health care industry. Freeing Mickey is really the least of it but nevertheless lies at the center of the issue and makes a great symbol. However I caution the potential reader to not multitask and read this book while viewing The Pirates of The Caribbean as the outcome is that they will go on to raise the colors and break the law!
続きを読む
役に立った
フィードバックを送信中...
フィードバックをお寄せいただきありがとうございます。
申し訳ありませんが、お客様の投票の記録に失敗しました。もう一度試してください。
違反を報告
レビュー を日本語に翻訳する

Scott Sigler
5つ星のうち4.0 Fascinating
2007年10月9日にアメリカ合衆国でレビュー済み
Amazonで購入
This book is worth the price just to hear the constant process of American culture - be a pirate, fend off "the man" to build your industry, become "the man," then go after the pirates who are presumably cutting into your business. Money makes hypocrites of us all. Please, RIAA, don't sue me for reading this book (although I'm sure you'll find a way, if there aren't any grandmothers or poor college students you can harass).
続きを読む
1人のお客様がこれが役に立ったと考えています
役に立った
フィードバックを送信中...
フィードバックをお寄せいただきありがとうございます。
申し訳ありませんが、お客様の投票の記録に失敗しました。もう一度試してください。
違反を報告
レビュー を日本語に翻訳する

Gene
5つ星のうち5.0 Must read...
2013年6月22日にアメリカ合衆国でレビュー済み
Amazonで購入
A very scary view of our society and legal system.
Unfortunately, it's true, and remains unchaged to this day.
Read this, and reinforce what you hopefully already know about the RIAA and MPAA.