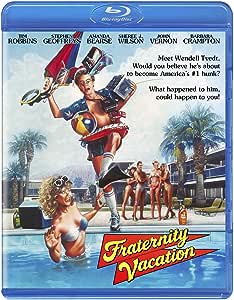 T. A. J. Leahy
5つ星のうち5.0 what teen comedy is all about
2013年10月14日に英国でレビュー済み
Amazonで購入
i love this film.its got everything you need in a teen comedy.great cast and lets not forget a brilliant performance from stephen geoffreys who plays the geek wendel.the film isnt the funniest you might see but there is just something about it where you cant take your eyes of it.there are some funny moments throughout but for me geoffreys steals the show.if you want to see another funny and brilliant performance from stephen geoffreys then check out fright night.but getting back to the film its a great teen comedy not to be missed,but please note the first 5 mins of the film is in black and white until they take a group picture and then it goes to colour,
続きを読む
4人のお客様がこれが役に立ったと考えています
役に立った
違反を報告
レビュー を日本語に翻訳する

Jet-X
5つ星のうち4.0 It's a wonderful escape from my ex-wife
2020年2月21日にアメリカ合衆国でレビュー済み
Amazonで購入
I remember when this film came out in the 80s. Hell, I snuck into the theater and watched it (wasn't quite old enough), and then the local video store had no problems renting me the VHS copy until I had to buy it because I wore it out (and never rewound it). I admired those guys in the film. Having fun, looking out for each other, scoring (or trying to) with women. And not one of them was dealing with an ex-wife.

Here I am over 30 years later, having to get through each and every day with my ex wife. The Blu-Ray was a welcome relief, because I could only stomach the DVD for so long. As the world is already beginning to move from 4K to 8K, we were stuck with an old 480P DVD that was already really old. Figures that after all this time, just before 1080p goes the way of VHS, that this marvelous film is released on Blu-Ray. And it's still as much fun as ever. In fact, when I have to read a stupid text message from my ex-wife, or see some of the passive aggressive messages she's thrown my kids way (or her dick of a new husband), once I deal with that, putting this film on brings peace to my life.

I pretend I'm Joe, because he's the one that's going for the hot girl in the film. Other times I pretend I'm Mother, the quirky friend watching over Joe and Wendell, thinking about what a great time they're having, and all the opportunities sitting right in front of them. None of them goes for the first woman they meet, settling down, and then a decade later going "Why the F did you do that? You're miserable now!!!!" But as an escape to past transgressions, I get lost in this film and ride it like a rollercoaster that's chugged 3 shot glasses of Rum just before blasting off.

Yes, this film wipes the past momentarily from my life. The biggest disappointment is that Brad Fiedel's amazing soundtrack isn't on an isolated track (or at the very least, include a CD of the soundtrack which was never released!). So I can't just turn off the lights and get lost in my own pity-party to Brad Fiedel's "Foolin' No One" song (it's the song that played when Wendell is broke down by the side of the road - a foreshadowing of what happens when you get married and then divorced). For that, this release only gets 4 stars.

The film's still a winner after all this time, and it's never looked better.

James Penney
5つ星のうち4.0 Goofy 80's teen comedy with a good cast
2011年2月7日にアメリカ合衆国でレビュー済み
Amazonで購入
I was expecting more based on the reviews on Amazon. Fraternity Vacation is Not a teen Sex Comedy and is extremely tame especially for 1985! I am 35 years old and remember watching this in my early teens on USA up all night. It was censored but this is the same movie minus a little and I mean little, nudity. A good cast Cameron Dye, (What happened to him?), Stephen Geoffreys, and a kind of young Tim Roth. However Not too many laughs a goofy dream girl plot that goes nowhere and what you have is a PG-13 fun silly 80's teen film. In the UK this might have got a PG, but especially when I was young as is now one scene of Boobs and you have an R-rating in the US. In Europe they don't mind the nudity as much but give harder ratings for the violence, I agree 100 percent with that premise! The United States is the exact opposite! Overall this is a standard silly teen comedy I enjoyed at 12 years old but not so much now. It's not bad with such a great cast, it can be fun, just don't expect anything past a good old fun but very mild teen Comedy/Romance. ..............I recommend These 80's teen sex comedy's.............Look for all of them especially the first it's the late 80's hidden jem T&A Jackpot! 1) Summer Job (Only available on VHS but this is the very best of the late 80's T&A films and is funny as well. This has Hot girls including a natural breasted and you Amy lynn Baxtor is her first movie! More nudity than a strip club, killer soundtrack and it's a party in itself! Highly Recommended! 2) Spring Break (Directed by Sean Cunningham 83') 3) The Beach Girls 4) Private school (Private school for girls, AKA) 5) The Last American Virgin, this is loaded but has a Sad ending that stops it from being a masterpiece, bad Idea by the director! 6) Loose Screws 7) Screwballs 8) There's alot more everybody Knows "Revenge of the Nerds", What a Classic! I hope Everybody forgets as I have "Porkys" A movie I hated and still do, Get the original for the shower Scene and that should cover it. I'm a comedian and the laughs are forced, they laugh uncontrollably and unrealistically at themselves more than you will! Can't wait rip apart this series in a separate review! .............If you can get your hands on old HBO/Cinemax movies nobody can find, (I'm getting there) good job!
続きを読む
5人のお客様がこれが役に立ったと考えています
役に立った
違反を報告
レビュー を日本語に翻訳する

R.C.
5つ星のうち4.0 Love Palm Springs!
2010年9月24日にアメリカ合衆国でレビュー済み
Amazonで購入
Just an average teen flick, but it reminds me of spring break in Palm Springs before they shut it down. It was starting to get crazy early 90's. I was hoping to get the original artwork but that's okay, I enjoyed the movie again! Thanks!!!
続きを読む
2人のお客様がこれが役に立ったと考えています
役に立った
違反を報告
レビュー を日本語に翻訳する

Kandyd
5つ星のうち4.0 Classic 80s
2013年1月18日にアメリカ合衆国でレビュー済み
Amazonで購入
I enjoyed this movie as a kid and thought this was a fun spring break film. And as an adult I still think it is hilarious! I did not mind paying the price for this DVD because I hated the cheesy cover art of the cheaper versions!
続きを読む
1人のお客様がこれが役に立ったと考えています
役に立った
違反を報告
レビュー を日本語に翻訳する