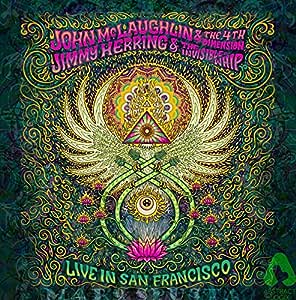 Graham Cooke
5つ星のうち5.0 If you have to buy an album this year
2018年10月20日に英国でレビュー済み
Amazonで購入
Time travel back to June 20th 1973 and a crowded concourse outside Birmingham Town Hall in the UK. We wandered round and round not quite being able to take in what we had just witnessed. Hundreds and hundreds of people with smiles on their faces and a sense of combined wonderment. What had brought this on? The Mahavishnu Orchestra had just completed a blindingly amazing set. I had no real idea of what to expect when John McLaughlin strode onto stage. What followed was an assault on the senses. Yes, it was loud, very loud, but the concert was about so much more than that. The music flowed, stirred and moved in so many ways - it was magical. Mahavishnu II at the Albert Hall, 22nd January 1975 was more restrained but still the music had the power to lift you and carry you through an amazing range of emotions. By November 1975 it was all over. But now we have a sublime masterpiece, a re-working of the original Mahavishnu classics by John McLaughlin and the stunning Jimmy Herring and their collective bands. Beautifully recorded and mixed, this live album is spine tinglingly good. It is music that challenges the listener but that effort is rewarded time and time again. If you have to buy an album this year ... let it be this one.
続きを読む
17人のお客様がこれが役に立ったと考えています
違反を報告
レビュー を日本語に翻訳する

Mr. David A. Norris
5つ星のうち5.0 A great self tribute ably supported by astonishing musicians
2018年10月13日に英国でレビュー済み
Amazonで購入
I like John McLaughlin a lot, and this really is a gem. From the first note to the last it’s an adrenalin rush of great playing, amazing intensity, musicianship and great tunes. It has been a long time since I got an album and have just spent hours on end playing it back to back. Somehow although I know all of these tunes backwards and every which way this sounds really fresh and vital to me.
続きを読む
7人のお客様がこれが役に立ったと考えています
違反を報告
レビュー を日本語に翻訳する

Allen Richard George
5つ星のうち4.0 Fitting Final Musical Statement
2018年10月9日に英国でレビュー済み
Amazonで購入
Widely garnered as JM's farewell tour, this recording comes from the San Fran date in a series of noteworthy concerts comprising not one, but two stellar bands. This CD, where the two bands unite for a third set for the evening, could easily have been a Mahavishnu muddle with every instrument doubled. Instead, it is a textbook example of restraint and how not to ruin a great idea by overplaying. If you got as far as these reviews then you know that no more be said; buy it and enjoy.

The only gripe is that this is another JM CD with cover/ packaging that is underwhelming at best. That said, the music is peerless.
続きを読む
6人のお客様がこれが役に立ったと考えています
違反を報告
レビュー を日本語に翻訳する