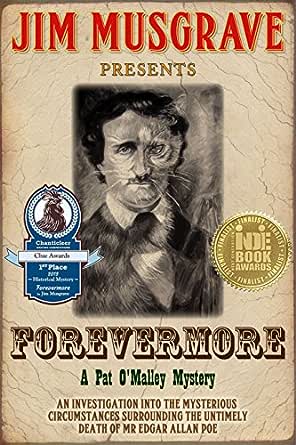 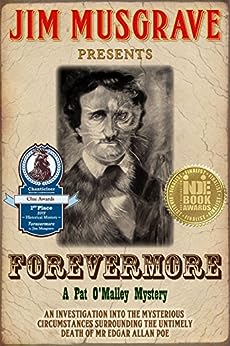 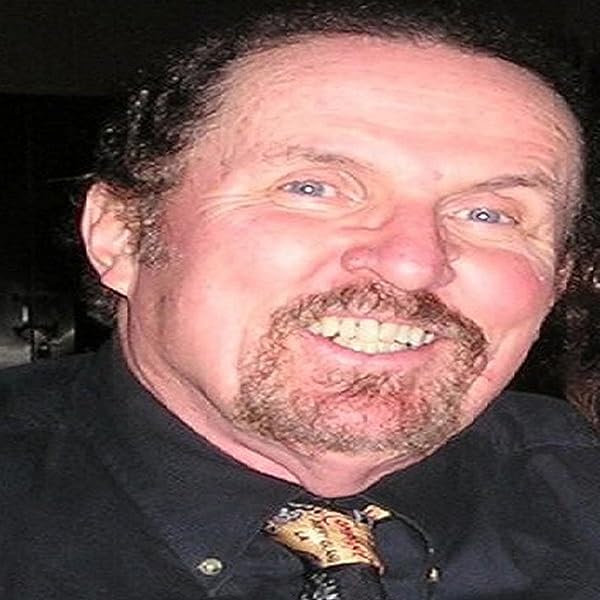 "I adore Edgar Allan Poe and when I started "Forevermore" by Jim Musgrave I thought, "Oh no...another book about how bad Poe was." Was I in for a marvelous shock!" -- Carol Piner "Kindle Book Reviews"

"Most historians uphold that literary legend Edgar Forevermore has a great narrator and protagonist in the form of Pat O'Malley. O'Malley is a truly developed and surprisingly complex character. He is likeable, and not a generic womanizer." -- Michael Albani "Portland Book Review" --このテキストは、kindle_edition版に関連付けられています。

Jim Musgrave's work has been recently featured in Best New Writing 2011, Hopewell Press, Titusville, N.J. He was a semi-finalist the Black Lawrence Press 2012 Chapbook Awards. He was also in a Bram Stoker Award Finalist volume of horror fiction, Beneath the Surface, 13 Shocking Tales of Terror, Shroud Publishing, San Francisco, CA. He is owner of English Majors Reviewers and Editors, LLC. He teaches college English composition in San Diego. --このテキストは、kindle_edition版に関連付けられています。

G. Messersmith
5つ星のうち4.0 A Charming Little Detective Story
2014年9月1日にアメリカ合衆国でレビュー済み
Amazonで購入
Patrick James O'Malley, a former Union soldier turned private detective, is the star of this novel. He is a well written and very likeable protagonist. It begins with O'Malley living in Edgar Allan Poe's cottage in the Bronx where he has determined he will prove that Poe did not die of drink but of homicide. To further complicate the story O'Malley once worked for Poe as his manuscript messenger and accompanied him on many visits around the city of New York. O'Malley looks up to Poe and could never dream of Poe's name being drug through the mud. His search for the truth leads him to another famous author of the time, Henry Wadsworth Longfellow. Evidently Longfellow and Poe hated each other and were constantly belittling each other to the press. It is amusing how Longfellow is portrayed in this novel.

There are other characters in this novel which will pull at your heart strings as well and some that are just pure evil. One of the evil ones is a man named John Anderson who lives in, are you ready,... Sleepy Hollow. Yes the same Sleepy Hollow made famous by Washington Irving in his well known story "The Headless Horseman." In fact, one of the things I loved about this book is the way Musgrave sprinkles literary references throughout.

One of the characters I most adore is Becky Charming, a beautiful madam, who is in love with O'Malley. Unfortunately, O'Malley has problems with intimacy so the tension builds. O'Malley is obviously quite smitten with Charming, not just for her good looks but her amazing intelligent as well, but finds himself at a loss as to how to close the deal so to speak. However, they make a fantastic duo in search of the bad guys and I found Charming to be an excellent addition to the novel.

Finally there is McKenzie, head of a ruthless gang known as the Plug Uglies. McKenzie is not a man to be trifled with but he takes a liking to O'Malley and in the end becomes a somewhat reluctant hero of the story. To say the least about McKenzie he is a complicated man.

Overall I really enjoyed this book. It was a quick and easy read and I look forward to book two in the series. If you like detective novels littered with literary references; beautiful women chasing after the protagonist; and a fearless hero, then you will love this novel.

Books Lovers Never Go to Bed Alone
5つ星のうち4.0 Very well done!
2013年6月29日にアメリカ合衆国でレビュー済み
Amazonで購入
Jim Musgrave's novel Forevermore is a fascinating look into the death of Edgar Allen Poe. The master of Gothic died under just as mysterious of circumstances as many of his famous tales. The records were lost and we are left with only questions about this bizarre figure of American fiction. Musgrave does a marvelous job of reconstructing as much as he could and then embellishes fact with his own fiction to unravel a "possible who done it" with grand style.

Patrick O'Malley, our protagonist, is a Poe fan. Unsettled by the unexplained circumstances, he begins his own investigation. The narrative is crisp and the story well-paced as O'Malley meets the famous and infamous of the period in his quest for the truth. The historical details are rich and Musgrave brings the period to life. The streets of 1800s America are vivid and lively by day, but Musgrave introduces us to the dark shadows of the era that lurked in the darkness.

For Poe fans, this is a fun read. It's an interesting take on one of history's great mysteries. For fans of historical fiction, you too will be pleased. Murder mystery fans will want to check this out as well. A well-rounded tale indeed!
続きを読む
1人のお客様がこれが役に立ったと考えています
役に立った
フィードバックを送信中...
フィードバックをお寄せいただきありがとうございます。
申し訳ありませんが、お客様の投票の記録に失敗しました。もう一度試してください。
違反を報告
レビュー を日本語に翻訳する

Atalanta
5つ星のうち3.0 not too bad a read
2014年3月31日にアメリカ合衆国でレビュー済み
Amazonで購入
Trying to solve the mysterious death of Edgar Allen Poe caught my attention, as I had just watched "The Raven."

Like other reviewers commented, Patrick's "loathing" of women was a distraction and did nothing to further the plot of the story. As well as the way he would put things together.

C. Reynolds
5つ星のうち3.0 Was Poe murdered?
2013年11月1日にアメリカ合衆国でレビュー済み
Amazonで購入
Shortly after the Civil War, Patrick O'Malley investigates the death of Edgar Allen Poe. He believes that Poe did not die of alcohol poisoning, but that he was murdered. O'Malley's investigation is confusing, encompassing Henry Wadsworth Longfellow, a millionaire tobacconist Mr. Anderson, and a Mr. McKenzie the leader of the Plug Uglies, a Five Points gang. Nevertheless, this book is interesting because of the history of New York.
続きを読む
役に立った
フィードバックを送信中...
フィードバックをお寄せいただきありがとうございます。
申し訳ありませんが、お客様の投票の記録に失敗しました。もう一度試してください。
違反を報告
レビュー を日本語に翻訳する

Ruthanne Taylor
5つ星のうち5.0 For Edgar Allen Poe fans
2013年4月26日にアメリカ合衆国でレビュー済み
Amazonで購入
This book is a marvelous mixture of truth, history & fiction resulting in a rollicking tale of mystery & intrigue in the style of Poe. The characters are well drawn, the plot is tight with plenty of twists & turns. Best of all, this book makes you think. I loved it.
続きを読む
1人のお客様がこれが役に立ったと考えています
役に立った
フィードバックを送信中...
フィードバックをお寄せいただきありがとうございます。
申し訳ありませんが、お客様の投票の記録に失敗しました。もう一度試してください。
違反を報告
レビュー を日本語に翻訳する
すべてのレビューを参照します
click to open popover
Amazonプライム会員ならお急ぎ便、日時指定便が使い放題
さらに、映画もTV番組も見放題。200万曲が聴き放題 。クラウドに好きなだけ写真も保存可能。
> プライムを無料で試す