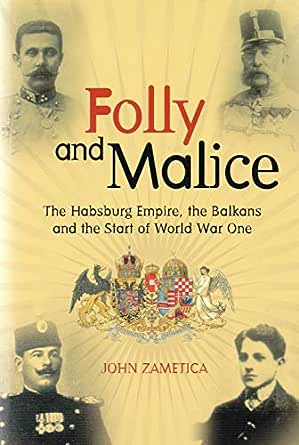 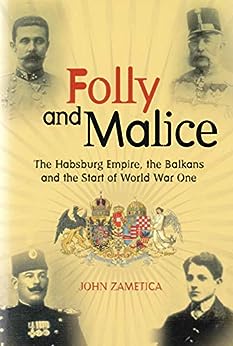 Folly and Malice: The Habsburg Empire, the Balkans and the Start of World War One (English Edition) Kindle版

"Through meticulous research he proves beyond doubt that the notorious Serbian terrorist group the Black Hand did not plan the plot, nor was the government involved ... His vivid description of the murders on Jun 28 is the best we have." --Mark Cornwall, The Times Literary Supplement

"A seminal work which forces readers to reflect further on issues they had thought settled...a powerfully argued work, whose conclusions will be carefully studied by historians for many years." --Prof. Vernon Bogdanor, International Affairs

"I hope it will not be too long before it gets critical acclaim and enters the canon as a seminal work that redefined how scholars and the rest of us look at First World War history. It's a long and complex book full of painstaking research of both primary and secondary sources, creating one of the most exciting academic texts I've come across in ages." --Tijana Delic, Britic

"Zametica's will be the automatic reference point for any future discussion . . . this writer has gripped the detail of the assassination story more fully than anyone before him . . . The book is both important and convincing. It will be essential reading for history undergraduates and should appeal to a broader audience." --Dr. Michael Stenton, Emeritus Fellow, Clare College, Cambridge

"This painstaking and meticulous piece of scholarship offers a challenge to some widely-held assumptions about the events which led up to the outbreak of World War One . . . This book has been a revelation to me and, whilst it might be considered controversial in some quarters, its challenge to existing thinking makes it a very significant contribution to the continuing debate about the causes of the Great War." --Trevor James, The Historian

"John Zametica has been controversial in his time, but let that not detract from what is a brilliant piece of historical writing on one of the most important aspects of the outbreak of the First World War. Not since Vladimir Dedijer's The Road to Sarajevo in 1967 has a book of this power and authority addressed the subject. John Zametica's scope is even wider than Dedijer's, and his conclusions more compelling." --Professor Sir Hew Strachan --このテキストは、hardcover版に関連付けられています。

John Zametica is the editor of British Officials and British Foreign Policy, 1945-50 (Leicester University Press, 1990) and the author of The Yugoslav Conflict (Brassey´s, The International Institute for Strategic Studies, 1992). He lives and works in Vienna.
--このテキストは、hardcover版に関連付けられています。

dendyver
5つ星のうち3.0 Two key documents missing
2018年9月2日に英国でレビュー済み
Amazonで購入
This book contains an exhaustingly detailed account of the Balkan events leading up to the declaration of War by the Austro-Hungarian government bully (population 50 million) against the innocent Serbian government (population 4 million).
The aim was to punch Serbia on the nose, and remove Russian influence in the area using a false flag operation (rather like successive American governments currently with respect to Syria).
My complaint about the book is that the author treats the readers with the arrogance of today’s main-steam-media. We know from Zametica the Austro-Hungarian ultimatum was 8 pages long, and the Serbian response ? pages long but neither are incorporated in a book of some 760 pages, not even in the original texts, let alone with English translations.
続きを読む
6人のお客様がこれが役に立ったと考えています
違反を報告
レビュー を日本語に翻訳する