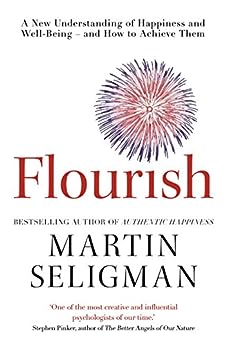 Flourish: A New Understanding of Happiness and Wellbeing: The practical guide to using positive psychology to make you happier and healthier (English Edition) Kindle版

Martin Seligman is the inventor of positive psychology and a major figure in the well-being movement. This makes him a significant figure in world culture. A happier society requires us to attend much more to the quality of our inner life, and to proven methods for improving it. This is important stuff. - ObserverI was immediately charmed. Seligman's intentions are admirable and exciting. He is consumed by his mission, which is to take psychology on from its traditional role in alleviating misery, and broaden it into positive psychology - the entirely different art of teaching us how to be wiser, stronger, more generous to others, more self-disciplined, and more capable of dealing with difficulty and rejection. The book is full of nuggets about why positive approaches work. Admirable and exciting. - Sunday TimesSince Martin Seligman launched the positive psychology movement more than a decade ago, his methods have attracted a global following, including David Cameron... The rise of 'positive psychology' has been all but unstoppable, with Seligman's book Authentic Happiness its key text... Now, in his book Flourish, happiness is out and well-being, or 'flourishing', is in. - PsychologiesHis most personal and boldest book so far... Seligman's book is a paean to applied science, a blue-print for how to translate empirical evidence from the laboratory to t --このテキストは、paperback版に関連付けられています。

Martin Seligman PhD, Professor of Psychology at the University of Pennsylvania and Director of the Positive Psychology Network, gave the Centennial address to the British Psychological Society in 2002 and is an Honorary Professor at the University of Cardiff. A former President of the American Psychological Association, he has written over 20 books including the bestselling Learned Optimism and Authentic Happiness and in 2009 was awarded the British Academy's Wiley Prize in Psychology. He is widely considered the pre-eminent expert on applied psychology in the world. --このテキストは、paperback版に関連付けられています。

Caitlin Cockcroft
5つ星のうち5.0 A must read for those wanting to understand how we thrive as opposed to existing psychological theories of why we suffer
2018年8月21日に英国でレビュー済み
Amazonで購入
I think Martin Seligman’s approach to writing a part-memoir part-theoretical book is really appealing and is one of the reasons I remain engaged with such writings.

I am fascinated by the concept of positive psychology and how it was not considered scientific enough to be taught in my highly renowned university degree 9 years ago, but that now it’s being acknowledged as the credible theory it is, I believe it should be taught within standardised psychology degrees.

The book itself leaves me wanting more - more of the science, more of the theory, more of Seligman’s experiences.

Debs Black
5つ星のうち3.0 Not as good as authentic happiness
2019年7月13日に英国でレビュー済み
Amazonで購入
This book had a lot of really interesting points but was not as easy or as interesting to read as authentic happiness by the same author. The author also came across as very egotistical in this book, and the book seemed more about him than the subject matter.
続きを読む
4人のお客様がこれが役に立ったと考えています
違反を報告
レビュー を日本語に翻訳する

Judging by the reviews, I was a bit mixed as to whether this book would be useful for me or not. Having read 'Authentic Happiness', I was left with a sense that it missed something about real life and wellbeing.

I felt he courageously revealed and accepted that his last book was not a complete picture of wellbeing, and that he had concentrated too much on happiness (which is mainly linked to mood/life satisfaction) -- and did not encompass meaning, engagement, positive relationships and accomplishment. But, he is only human and he is constantly evolving (as we all are)...And, thank goodness, he has the passion and drive to continue to improve on his work. His book shows the conscious improvement on his thoughts and uncertainties, and his overview of the evidence-base, to draw his conclusion about the key elements for flourishing.

The reason for 4 out of 5, is simply that I felt he expanded a little too much on his pre-positive psychology days, at the beginning, which did not add value to the information he was presenting about flourishing for wellbeing.

However, I did like the story behind Martin Seligmans development and input into positive psychology, and he writes about a plethora of evidence-base for its effectiveness -- yet still questions certain areas that continue to be developed. He enthusiastically discusses his peers and their important contribution to creating the, say, Penn Resilience Programme.

I feel it is an amazing feat to have been able to incorporate the programme into the US Army and schools, and that it is being closely monitored. He displays a compassion for the problems many soldiers encounter when they leave the army, or real-time situations they have to deal with at home -- simply because of their links with mobile technology to their loved ones.

With his constructive reasoning he convinces me of the benefits of positive psychology, and that it is not just a 'happiology' - but a realistic portrayal of the essential elements required for inner resilience within the fast-paced and ever-changing world we live in today. I plan to use this book to inform my practice as a resilience coach/trainer.