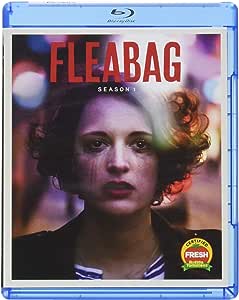 Anon
5つ星のうち5.0 One of the best shows of 2016
2016年9月20日 - (Amazon.com)
Amazonで購入
One of the funniest shows I've seen all year. I binge watched it. Obviously if you're going to get upset with graphic jokes about anal intercourse then this is not the show for you but if you want to see something funny, dark, feminist, poignant and with a brilliant star turn from Olivia Coleman then you'll probably like it.
My other favourite shows of this year include Stranger Things, The Get Down, Fargo, Jessica Jones, Unbreakable Kimmi Schmidt and Narcos - if you liked those we have similar taste and you might like this.

MaiTai
5つ星のうち5.0 Funny and Savage and Real All In One Show
2016年9月23日 - (Amazon.com)
Amazonで購入
I didn't really want to like this show, but I thought, "Well, there's nothing better on." And then I was charmed by the lead character, who never really has a name in the series. She's bright, funny, pretty, and covering up a mountain of pain that her family and those around her do nothing to alleviate with a sarcastic whit and humor that is both funny and at times slightly terrifying by parts.

The thing is this show is probably more honest about those "perfect" families that look so good to outsiders. Something a guy she's dating even comments on at one point and she, much like me, just gives him a look like, "Yeah? If you only knew how totally fracked these people all are you'd be running away screaming." Or at least that's what I'd was thinking, and she probably was too.

I won't go into it any further or any spoilers except to say what starts out as a bright, funny lark of a show turns dark and then darker still as the cracks begin to show. You are by turns infuriated and laughing at her and with her, and by the end you just hope she'll simply disappear into the London fog leaving her absolutely terrible damaged beyond all belief family and friends and just get out of there, find someplace to breath, and repair her life.

I'm hoping for more and I'd like to see her find a good place for herself, but since this isn't a show that pretends in Hollywood endings we may not get that. Instead what we will get is probably the sort of raw honesty and the light and dark that life really is made up of in the form of some amazingly talented people telling the story that people all around us live every single day of their lives.

And I think we need more of that, so I'm going to pray for a Season 2 and now find anything that Phoebe Waller-Bridge has ever starred in or done, because I am a complete and total fan of hers now. Something that just doesn't happen too often.