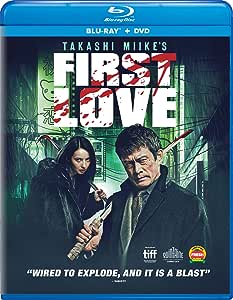 Ben
5つ星のうち5.0 A good stepping stone of a movie to start your journey of watching foreign films.
2020年2月14日 - (Amazon.com)
Amazonで購入
If I had to describe this film, it is a mix between a Tarantino film and a Guy Richie film. I know Tarantino borrowed a lot from Japanese cinema so I take pause in comparing it to one of his films but you can tell there is a great attempt of a Japanese director trying to reach across the aisle and appeal to a western audience. The strong points in this movie are the characters and they are fleshed out well. If you are curious of stepping into the world of "non-Hollywood" films, this is a good starting point. I have friends who said they dont watch foreign films but after they saw this, they are now seeing that other countries make good films.
続きを読む
1人のお客様がこれが役に立ったと考えています
レビュー を日本語に翻訳する

Victor
5つ星のうち5.0 A Zany Ride
2020年2月16日 - (Amazon.com)
Amazonで購入
It's got that signature Takashi Miike blend of action and humor. Absolutely loved the characters and hilarious hijinks that ensued. Would definitely recommend for fans of Yakuza films.
続きを読む
3人のお客様がこれが役に立ったと考えています
レビュー を日本語に翻訳する

We Like Quality!
5つ星のうち5.0 Amazing!
2020年2月13日 - (Amazon.com)
Amazonで購入
I loved First Love! I had missed it when it was in theaters. So I pre-ordered it here on Amazon. It is had good twists and turns. It gave me a feeling of watching a Japanese movie mixed with Tarantino and Scorsese themes. Buckle up for a good time!
続きを読む
1人のお客様がこれが役に立ったと考えています
レビュー を日本語に翻訳する

John Smith
5つ星のうち1.0 DON'T WASTE YOUR MONEY (LIKE I DID).
2020年2月18日 - (Amazon.com)
Amazonで購入
TOTALLY DISAPPOINTED. CAMPY. UNREALISTIC. A LET DOWN. I GUESS IT WAS SUPPOSED TO BE FUNNY? PATHETIC.
続きを読む
レビュー を日本語に翻訳する

DVD reviewer
5つ星のうち3.0 If Tarantino was Japanese and needed English subtitles . . . .
2020年2月9日 - (Amazon.com)
It’s hard to watch this film from Takashi Miike and not have flashbacks to Pulp Fiction. If you thought that the Quentin Tarantino film was hard to follow in the early going, picture it in Japanese with English subtitles and even more crazy plot strands threatening to go off on their own, and over a longer period of time. Picture it with the same casual extreme violence, with a tongue-in-cheek humor that serves to relieve some of the tension that’s building in a yakuza drug-world pressure cooker, but ratchets up the tension in other instances.

There are cops that may or may not be on the take, a boxer who lost a big fight because of a serious hidden illness, an alcohol-and-drug fueled working girl forced to do what she does because of her father’s debt (she’s “on a loan”), a “boss” yakuza just out of prison, a mid-level hood with ambitions of becoming a yakuza, a pimp who’s somehow involved with drugs and gangs, and a young woman who’s involvement in everything stems from her involvement with him. And the narrative device that forces all of these people to cross paths is a drug shipment that keeps changing hands, often to comic effect. Along the way there’s lots of blood, some graphic “kills,” and (as a result) a mixture of laughs and cringeworthy moments. Heads will roll, if you get my drift. First Love is like Date Night in the sense that the plot resembles a runaway train headed downhill and no brakes, but it’s a film with even more moving parts and Tarantino-like extreme outcomes.

In other words, First Love won’t be for everyone. You have to work to stay engaged, initially, and you have to roll with the narrative and violence and not worry about where it’s taking you. And yes, you might even have to watch it a second time to get the full effect if you’re adept at reading subtitles AND catching everything that’s going on in the each scene. But there are some very entertaining moments in this film, and as crime comedies go it probably merits a 3 to 3.5 out of 5.