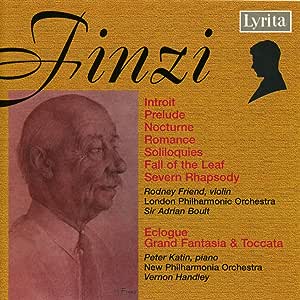 Gerald Finzi (1901-1956) was a representative British composer of the early twentieth century, with many fine chamber, choral, and orchestral works to his credit. The best of the latter are featured on this authoritative disc. Sir Adrian Boult (1889-1983) was one of the greatest, most beloved, and longest-lived of all British conductors. He made countless acclaimed recordings and was personally acquainted with many of the composers whose music he led.

Gerald Finzi (1901-1956) was a representative British composer of the early twentieth century, with many fine chamber, choral, and orchestral works to his credit. The best of the latter are featured on this authoritative disc. Sir Adrian Boult (1889-1983) was one of the greatest, most beloved, and longest-lived of all British conductors. He made countless acclaimed recordings and was personally acquainted with many of the composers whose music he led.

Jeremy Robson
5つ星のうち5.0 Finzi's England, courtesy of Sir Adrian...
2019年12月16日に英国でレビュー済み
Amazonで購入
Ah, Finzi's music... the peace and tranquility of England's once green and pleasant land. Away from all of the Austro-German bombast - Beethoven and Bruckner! - there was a gentle music and a gentle place where gentle folk greeted one another with a "blue-eyed" smile and their collective future looked oh so bright... this was England. What on earth happened to England? Well, it still exists in music... Finzi's "Severn Rhapsody" recreates that idyllic, rural England of our ancestors which still exists in the hearts and minds of the folk of this island. Thank God.
続きを読む
役に立った
フィードバックを送信中...
フィードバックをお寄せいただきありがとうございます。
申し訳ありませんが、お客様の投票の記録に失敗しました。もう一度試してください。
違反を報告
レビュー を日本語に翻訳する

Euan
5つ星のうち5.0 Highly recommended.
2016年10月9日に英国でレビュー済み
Amazonで購入
While the recorded sound shows its age a bit, the works themselves shine though - short orchestral pieces, some not recorded elsewhere. The works show Finzi's extraordinary poetic sensibility, even the very early Severn Rhapsody, A quiet music, but once it's inside your being, it stays. Highly recommended.
続きを読む
1人のお客様がこれが役に立ったと考えています
役に立った
フィードバックを送信中...
フィードバックをお寄せいただきありがとうございます。
申し訳ありませんが、お客様の投票の記録に失敗しました。もう一度試してください。
違反を報告
レビュー を日本語に翻訳する

John K. Gayley
5つ星のうち5.0 Pastoral beauty and wistfulness defined
2011年1月26日にアメリカ合衆国でレビュー済み
Amazonで購入
Lyrita has produced many wonderful CDs of 20th century British music, but for sheer loveliness this one tops the list for me. Finzi was a close friend and contemporary of Ralph Vaughan Williams. He was known mainly for his song settings, and his orchestral miniatures...the latter all finely crafted, contemplative, and wistful, but with a quiet confident cadence throughout. Try the "Severn Rhapsody, The "Eclogue" for Piano and strings, or the Introit for a characteristic representation.

Lyrita has combined key selections from two separate earlier releases into one generously-endowed CD that contains much of Finzi's small-scale orchestral output. In the late '70s, various U.S. classical radio stations would play snippets of Finzi despite the fact that the recording was available only sporadically in the US (at best). Torture! It took me 4 years to find and obtain copies of these records, and only then by sending pounds sterling in a carefully-padded envelope through "snail mail" to a distributor in the UK. This was the last vinyl record I held onto, and (well before Lyrita relased this CD) paid someone a small fortune to transfer the contents onto a custom CD for me.

I was thus delighted when Lyrita got around to re-releasing their back catalogue...its been well worth it. Lyrita's sound quality and recording techniques were--and are--judged to be absolutely first rate. Sir Adrian Boult, one of the doyens of 20th century English Music (and a close friend of the Finzi family) delivers extremely sympathetic renditions of these pieces, based on his longstanding association with Finzi and his music...these renditions haven't been bettered since being recorded in the late 70s. (the drawing of Sir Adrian on the front cover was done by Finzi's wife.) Highly, highly recommended to those who enjoy 20th century British pastoral music.

RN ESQ
5つ星のうち5.0 79+ minutes of bliss
2007年11月2日にアメリカ合衆国でレビュー済み
Amazonで購入
I first heard the music of Gerald Finzi while driving in a rental car in Albany, New York in 1990. A classical station was playing his "Eclogue for Piano and Strings". I was dumbfounded. Why had I never before heard this beautiful piece of music ? I pulled over to the side of the road and called the station (remember those early cell phones that looked like walkie-talkies ?), and got the info. When I returned home, I hunted down the Lyrita LP, with Peter Katin on the piano, and the strings of the New Philharmonia Orchestra. Years later, I got rid of all of my LPs; I had several CDs of Finzi's music by then, and I figured that my departed and sorely missed LP would soon be out on CD.

I waited quite a while, as it turned out, but it was worth the wait. The Lyrita Recorded Edition (see my Alwyn review for info about the label) has done a superb transfer of the original LP to CD, adding pieces from another Finzi LP on the way. The sum total is this magnificent collection of music by a man whom I consider to be the most underrated composer of the 20th century.

The works on this disc include: A Severn Rhapsody (Op.3), Nocturne (Op.7), Three Soliloquies for Small Orchestra (from Op.28), Romance for String Orchestra (Op.11), Prelude for String Orchestra (Op.25), The Fall of the Leaf (Op.20), Introit for Small Orchestra and solo Violin (Op.6), the Eclogue for Piano and Strings (Op.10), and the Grand Fantasia and Toccata for Piano and Orchestra (Op.38). The Eclogue and the Grand Fantasia are played by the New Philharmonia, conducted by Vernon Handley; the remainder of the works are played by the London Philharmonic Orchestra conducted by Sir Adrian Boult.

Finzi's parents were Jewish, and despite his Italian-sounding name, he was as English as could be. He studied counterpoint at the Royal College of Music, and later taught at the Royal Academy of Music. After his marriage in 1933, he and his wife lived in the country; it was an idyllic life in pastoral surroundings. He enjoyed modest success as a composer in England, with numerous works published and performed in his lifetime. Sadly, he died too young at age 55.

Many CDs of Finzi's music are available; I have six aside from this one, on the Naxos, EMI, Chandos, and Nimbus labels. This Lyrita CD is by far the best of the lot. The sound is lifelike, full, and transparent, on a solid black-quiet background. The music itself is melodic, lyrical, and elegant; perhaps the best word is "moving". Finzi was a friend of Howard Ferguson, Ralph Vaughan Williams, and William Walton, among others, and the influence of those friends is detectable yet Finzi speaks in his own voice. This is emotional music that stays with you for a long time after the disc is over.

I can't recommend this disc highly enough. It should be in the collection of every serious music lover.