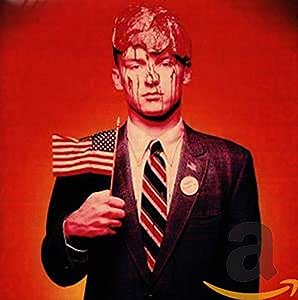 Filth Pig arrived after an extended break that found Al Jourgensen and Paul Barker giving rural Texas life a try before retreating back to the chilled concrete of Chicago. But, despite the Lone Star roots of some of its songs and much talk of Jourgensen's budding taste for country music, Filth Pig isn't Ministry's Nashville Skyline. There may be more organic elements as guitars more to the fore at the expense of keyboards and samples, but Jourgensen and Barker's forte remains the bitter screed powered by insistent beats and pummeling riffs. Ministry may have some new tools these days (most notably standout drummer Rey Washam, formerly of Scratch Acid and Rapeman), but they're working on the same old chassis. --Steven Stolder

L. Hathaway
5つ星のうち5.0 A Very Important Album... For Me At Least
2011年12月16日に英国でレビュー済み
Amazonで購入
With Ministry having slated a new release for next year after their reformation and with myself having listened to THIS record very regularly for the last year, I thought it would be fitting to review it.

First of all, before ever listening Filth Pig, I wasn't the biggest Ministry Fan. I had heard the odd track here and there and had listened to Psalm 69, (mainly for Jesus Built My Hotrod) sources told me it was their best album... After listening to Psalm enough, I wanted to delve further into the Ministry catalogue in search of more 999 mph riffs, wacky sampling and basically everything else that caught my ear in Psalm 69. Where best to look? The next album of course...

In my case this proved to be a dead end in searching for what I thought would be Psalm 70. I gave Filth Pig one listen and was flabbergasted. It just didn't seem right to me, it all seemed merged into one. `Reload' started the album off on the right foot driven by its thick, face-melting bass-line but that was over in two and a half minutes. The only track which sort of got my attention was `Crumbs' and still, I wasn't so interested in Filth Pig anymore. I was pretty disappointed. That was September 2010. Move on to early January 2011 and I gave Filth Pig another shot.

I'm not sure why, but I remember playing a few tracks from Filth Pig at random during a journey, the first time I had listened to it in months. Suddenly, a different approach to heavy music had stood out to me unlike before. I started giving the album more attention over the subsequent weeks and before I knew it I was listening to it constantly. A masterpiece of an album had emerged.

`Reload', the first track as I before mentioned, is almost like a false start. It's like it was leading the keen listeners of Psalm 69 back in 1996 into a full sense of security before the slow, sinister, sludgy and monolithic Filth Pig truly kicks in. This album is immensely slow yet crushingly heavy for the most part. The title track is a dragging, two-chord piece of pure menace, mood set perfectly by the apocalyptic drum clatter right at the start. It even incorporates a harmonica solo which adds to the southern vibe. Straight after is `Lava'. This one sounds like a catchy tune grinded distortedly through melting bass amps. Other stand-outs include `Crumbs' with its militant style, chugging riff and venomous lyrics. Also, `Game Show' a near eight minutes of anguish accompanied by stop start, hard-hitting guitars which almost seem slowed down, a particularly eerie track.

Filth Pig has plenty of highlights but my two favourite tracks are `The Fall' and `Lay Lady Lay'. `The Fall' is a collision of absolute doom and beautiful despair. This is evoked by the roaring synth and crashing snares juxtaposed with a delicate cascading piano line. `Lay Lady Lay', Ministry's atmospheric, acid-laced rendition of Bob Dylan's classic is bizarrely pulled off and even more bizarrely, is actually quite moving. I have listened to no other two tracks more in the last year.

All in all, Filth Pig isn't exactly the album to go for if you are trying to get into Ministry quickly (like I was) I'd suggest Psalm 69, The Land Of Rape And Honey or Animositisomina if that's the case. Filth Pig is special to me because it was my first introduction to slower, heavier genres of metal. I've since gone on to discover and to love bands like Electric Wizard, Godflesh, (which were a huge influence on this album) even Type O Negative and it all started with Filth Pig. I feel like my music taste has matured and broadened vastly since I started appreciating this record.

It's not hard to see why it was so badly received when it was released, even I'm guilty of dismissing it at first, but Filth Pig simply demands more from the listeners who would be casually in search of good old riffage. It's a damn shame that the upcoming Ministry album will be, even if enjoyable, more generic thrash. If Filth Pig had been given time it would undoubtedly be a classic of the metal genre.
続きを読む
5人のお客様がこれが役に立ったと考えています
違反を報告
レビュー を日本語に翻訳する

ravenheart
5つ星のうち4.0 a breath of fresh air
2007年11月25日に英国でレビュー済み
Amazonで購入
The review used as the description for this album is nonsense. To use "plodding" and "death-metal sound" in the same sentance shows beyond doubt the reviewer doesn't know the field they're attempting to comment on (in case you were wondering, reviewer, what you should have said was "doom-metal sound").

Then you've got the reviews who say "music critics suck". No, you just don't agree with what you've read about this album. That's not the same thing. That's like saying "movies suck" when you see a bad one. If they'd all said what a great album this was you wouldn't be saying that. Truth be told you wouldn't be saying anything about them at all because saying music critics rock is like saying the police in your town do a good job. Nobody ever says that, even when it's true.

As to the album itself, it's a breath of fresh air in the context of the Ministry catalogue. For once we don't have to listen to Al Jourgensen's voice being mangled by the over-use of effects. Anyone who's heard the 1000 Homo DJs version of Black Sabbath's Supernaut on the Nativity In Black tribue album knows Al's voice is great for slow, doomy, heavy metal. And that's the angle Ministry have taken with this record. The overall vibe is slow and downright nasty. The level of hate and anger is palpable and the heaviness unrivaled.

I couldn't possible suggest whether this is Ministry's best work or not. I don't particularly like the records where you can't really understand what Jourgensen is saying through the white noise effects, which is the staple diet for Ministry fans, so to try to suggest what's best and what's not within their catalogue would be unfair.