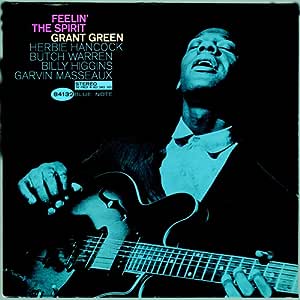 Dale Young
5つ星のうち5.0 Fervor & Feeling From a Truly Fine Guitarist
2016年2月6日にアメリカ合衆国でレビュー済み
Amazonで購入
All right. I admit a bit of bias here. I know Charlie Christian and Wes Montgomery are considered the “gods” of jazz guitar, but there’s almost nothing Grant Green plays that I wouldn’t listen to. There’s something singular about his style. A purity, a joyfulness and a forcefulness that sets him apart from other jazz guitarists. IDLE MOMENTS is understandably the one Green album that gets a lot of attention from both fans and critics. But from the first time I heard this album, I loved it. Maybe it’s because I’m as much a gospel fan as I am a jazz guy. If I’m not listening to John Coltrane or Charles Mingus, I’m quite happy listening to artists like Blind Willy Johnson, Mavis Staples, or Ray Charles. And there’s another reason I like this album: musically, or genre-wise (if such a word exists), it’s not your typical jazz album. Sometimes I get tired of listening to the same “bop” over and over. So when something different comes along, be it Jimmy Smith, Eric Dolphy, or Grant Green, I feel the need to take a listen. But even apart from being “different” there’s no doubt FEELIN’ THE SPIRIT is a stellar recording.

Musically these songs can be categorized as Negro folk songs or "gospel blues." Whatever you call them, you couldn’t find a better man for the job than Green. Actually, the first time I heard Green his sound seemed as much blues (and rock) to me as it did jazz. And the roots of blues, of course, go back to spirituals and gospel songs - which are clearly a part of Green’s roots. As Joe Goldberg points out in the liner notes, one of Green’s favorite techniques is one which is traditionally used in black churches: “the repetition of a single, often simple, melodic phrase, over and over again with gathering intensity, until the tension becomes nearly unbearable.” I can’t articulate it as well as Goldberg, but these songs contain some really fine playing by Green. There is a fervor and depth of feeling in these notes that you’ll find hardly anywhere else. “Nobody Knows. . .” and “Sometimes I Feel Like a Motherless Child” are especially soul-stirring performances, but the other tracks are great as well. Why some people gave this album four stars, and not five, I don’t really understand (but then this is music and everybody’s got a different "take"). The bottom line: if you’re a Grant Green fan or you just love jazz guitar, you gotta check this out.
続きを読む
6人のお客様がこれが役に立ったと考えています
役に立った
フィードバックを送信中...
フィードバックをお寄せいただきありがとうございます。
申し訳ありませんが、お客様の投票の記録に失敗しました。もう一度試してください。
違反を報告
レビュー を日本語に翻訳する

David Zapolsky
5つ星のうち4.0 Delightful and at times inspiring
2006年11月29日にアメリカ合衆国でレビュー済み
Amazonで購入
I bought this album after hearing "Jericho" on radio, and while I agree with some of the reservations expressed in the other reviews about the quality of Green's performance in these sessions, I found this album surprisingly satisfying. Overall, Green's work is very solid, and often inspired (though at times, admittedly, repetitive). But what really makes the album swing is Grant's backup cast, which picks up energetically wherever Green leaves off. In particular, Green's pianist for the album, a young Herbie Hancock, stands out on nearly all the tracks, and at times nearly steals the show from Green. Green's synergy with his band, and the obvious inspiration that all the players drew from the spirituals that make up the musical core of this record, are well worth owning and listening to repeatedly, and they hold up well to the test of time with many of the era's best sessions.
続きを読む
2人のお客様がこれが役に立ったと考えています
役に立った
フィードバックを送信中...
フィードバックをお寄せいただきありがとうございます。
申し訳ありませんが、お客様の投票の記録に失敗しました。もう一度試してください。
違反を報告
レビュー を日本語に翻訳する
その他の国際レビューを読み込む

Robert Bezimienny
5つ星のうち5.0 A Truly Human Sound
2000年11月1日にアメリカ合衆国でレビュー済み
Amazonで購入
In this recording Mr.Green sets aside his familiar Gibson LS5 guitar in favour of the rather obscure Central American mystic, Sister Alessandra Jorge Diaz (from the order of Our Lady of Perpetual Succour), who proves to be a most marvellous instrument. She is heard strung with traditional gut, and with the more resonant steel, and in both cases she delivers a highly uncommon sound. Mr.Green's uses of the plectrum and of the kapok are very instructive. Mr.Hancock, undoubtedly inspired by Mr.Green's liberties, relinquishes his beloved piano and plays Mr.Harvery Lionel Bally of Rusty Springs, Idaho. Mr.Bally's upper registers are something of a pleasant surprise, but his lower reaches leave much to be desired. When all is said and done, however, all praise must go to Mr.Hancock's well-oiled technique for providing such stimulating accompaniment. Noted bassist, Butch Warren, here masters the art of bowing and plucking Mrs.Eugenie Fillapot, a long-time jazz nut, while Billy Higgins hits the skins of a certain Otto Franz Mommsen, who later filed suit against Blue Note Records for alleged breaches of contract and propriety. Garvin Masseaux sticks to shaking his tambourine, and this can be considered the only sour and conservative note in what is otherwise a highly enjoyable and experimental album, way ahead of its own, or any other, time.
続きを読む
4人のお客様がこれが役に立ったと考えています
役に立った
フィードバックを送信中...
フィードバックをお寄せいただきありがとうございます。
申し訳ありませんが、お客様の投票の記録に失敗しました。もう一度試してください。
違反を報告
レビュー を日本語に翻訳する