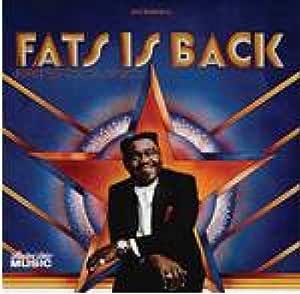 Like many of the early legends of rock & roll, Fats Domino didn't command a lot of attention in the late '60s. Not only had the British Invasion pushed Fats, Chuck, Little Richard, and their contemporaries off the charts, but post-1965 developments like psychedelia and folk-rock made straightforward rock & roll and rolling New Orleans R&B sound a little old-fashioned. In other words, it was time for the first generation to stage a comeback. Producer Richard Perry never neglects the essentials of Fats' music -- he retains the easygoing charm and endearing shuffles, just updating it slightly. In retrospect, Fats Is Back feels like Perry's blueprint for Ringo Starr's star-studded extravaganzas of the mid-'70s -- he selects an impeccable set of songs, nearly all covers but not just relying on obvious selections, assembles a first-rate cast of musicians, and then puts on a show. After all, this is an album that begins with a roll call of Domino's greatest hits and then ends with "One More Song for You" -- it's intended to be spectacular and it comes damn close to being one. Part of the reason Fats Is Back works is that it's designed to entertain but never oversells itself -- sort of like the man himself, actually. Fats delivers tailor-made new songs, Barbara George's "I Know," a remake of his classic "I'm Ready," and two Beatles covers (McCartney's Fats tribute "Lady Madonna" and "Lovely Rita") with equal gusto. Years on from its initial release, Fats Is Back still sounds like a sly, endearing update of the classic Domino sound. It may not match his classic Imperial recordings, yet it will no doubt please anyone wishing to dig a little deeper. ~ Stephen Thomas Erlewine, All Music Guide

DGS
5つ星のうち4.0 Fats is Back (well some of him...)
2011年3月21日に英国でレビュー済み
Amazonで購入
At least with Fats Domino you know what you're getting. Indeed it is the predicability of his Creole rhythms, New Orl'n accent, bluesy intonation and narrow range of lyrics (almost always about losing his girl) that endears him to most of his avid followers. And I am one - having bought 'Ain't That a Shame' when I was 12 and stuck obsessively ever since. This cd is a 1968 session made when he was in the doldrums, so much so he told the producer he didn't want to play piano on the tracks - and he only plays on the excellent 'I'm Ready' (track 2)- James Booker of Lloyd Price fame plays on the others! He plays two Beatles hits, 'Lady Madonna' the lyrics of which mystified him but is a cracking, driving number very much extracted by the Beatles from a Domino format, and the best forgotten 'Lovely Rita' which is the worst track on the cd. The other tracks are full of losing his girl but there is a cunning note-for-note replay of the piano break on 'The Fat Man' in the middle of 'Honest Papas Loves Their Mamas Best' - very post modernist and reflective and also very much about the best of Fats Domino's oeuvre; the only thing though it ain't Fats playing the piano! Mores the pity. We needed more tracks (only 37 minutes here) which makes the final track 'One More Song For You' rather ironic - we could have done with another dozen at least; but that was the way they made their LPs in those days. Some Fats tracks barely pushed 2 minutes on the original Imperial releases. A good cd and essential to those Domino afficionadoes who simply can't get enough!
続きを読む
3人のお客様がこれが役に立ったと考えています
役に立った
フィードバックを送信中...
フィードバックをお寄せいただきありがとうございます。
申し訳ありませんが、お客様の投票の記録に失敗しました。もう一度試してください。
違反を報告
レビュー を日本語に翻訳する