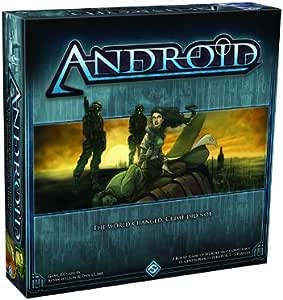 A.J. Lord
5つ星のうち5.0 "More human than human" is our motto...
2016年1月23日に英国でレビュー済み
Amazonで購入
This is a very adventurous idea for a board game. It's not your usual deduction fare like Cluedo, there is no 'set' murderer decided at the game start. Instead, players must gather evidence to each build a case against one of the suspects and also prove the innocence of another. This is one of the parts I love about this game. The ambiguity. Are you, as the detective, genuinely gathering evidence or are you just trying to build a strong enough case to frame someone, and get a result? It doesn't matter. If your case is the strongest, you get the points.
The game is set in a dystopian, Bladerunner-esque future. A metropolis connected by space-elevator to a large settlement on the moon. Each of the 5 player characters has his/her own story and personal issues to deal with while solving the case. Maybe you're a grizzled street cop struggling to get his life back on track as his wife threatens him with divorce. Or a sentient robotic law enforcer coming to terms with his own 'humanity' whilst breaking his code for good, or ill. There is a strong sense of story-telling and roleplaying to this game which can really drag players into it's world.
As well as the murder cases, there is an over-arching conspiracy which can be uncovered by means of a jigsaw puzzle attached to the board. Large corporations and institutions, some of which have direct links to the player characters and suspects may be incriminated if the detectives devote enough time and resources to investigating them and making the right connections.
The production value is absolutely excellent. The graphic design, artwork and components are the usual Fantasy Flight quality. However, Android isn't without it's flaws. There are a lot of rules, lots of things to keep track of and it can be a very long game. But for a game as ambitious and different as this I can forgive it.
Also, the box states 3-5 players, but I've had a lot of fun playing it with just 2. 3 players is probably the sweet spot as with 4 or 5 there can be just too much time between turns.
If you're a fan of bleak dystopian futures, Bladerunner, Philip K. Dick, roleplaying, detective stories, conspiracies, unconventional board games or even a player of Android:Netrunner who wants to see where the history of that universe originates then check out Android.

Winston Smith
5つ星のうち1.0 Murder investigation game with no actual "murderer".... So whats the point right?
2016年8月13日に英国でレビュー済み
Amazonで購入
Well... I am not sure who these people are who "5 Starred" and absolutely gush about the thing? I am guessing people involved in the game itself? I suggest you go on youtube and look at experienced game reviewers for a better and more balanced opinion. Most of those game reviewers, even the generous ones hate this game...and I along with them. The real tragedy is I, just like many of them, WANTED to enjoy this game so much...

OK...So I am part of a board game geek group who meets up for regular table top fun. I, like them, am a huge fan of Talisman, Dead of Winter, Descent, Twilight Imperium, Castles of Burgundy and a few others. I was particularly overjoyed to find "Android" because one of my favourite Sci-Fi films is "Bladerunner" so naturally I punched the air with joy and ordered the thing immediately. Upon opening you see a huge and gorgeous looking board, a myriad of gamed pieces, cards and the usual well-made pieces you would want from any upper end game... then you start to read the rules...

Then you look for a youtube tutorial on the rules... then you read the rules some more and keep checking back to the video then after an hour we decided to follow the advice of an Android set-up video and thought we could just play our way through it... and then we did. And it was horrible.

1: The first real let down = Learning that there is no murderer as such? Yes that's right... A game trying its hardest to be Bladerunner with NO Roy or Pris to go after. Yes there is a crime committed but there is no case to solve? You can simply frame any one of the various suspects by placing evidence on them and hoping it mounts up more than anyone else's evidence. The suspects themselves barely register as personalities that you want to go after and you literally could swap the cards for pieces of paper with A, B and C on them for the "who has the most of these tokens is winning" pile. For the aspiring "bladerunner" out there genuinely looking for a suspect I was a little heartbroken and it became clear that the crux of the game is simply to beat the other investigating players (all of them overly emotional prima donnas with more drama than a daytime soap and wracked with personal issues) while barely caring about the crime or suspects at all.

2: The Light - Dark mechanic. This dreadful mechanism hinges on your characters 'Twilight cards' and personal plot cards which frankly takes IS the game... Its not actually an investigation at all but a story of people absolutely riddled with personal issues that give you small bonuses or not upon completion/resolution to gain points over another equally incapable and unstable "investigator" of a murderer who does not exist and cannot be investigated.

3: The conspiracy jigsaw...just pointless. The "hunch" cards... Pointless because you can just have a hunch for anyone you choose and its rich because there is not an actual murderer. The alibi's....All pointless because there is not an actual murderer!?! The whole basis of an investigative/ detective scenario is pointless because it's more about characters who literally want to have complete breakdowns every second regardless of the investigation. And you are trying to cause it.... They might have well set it as a soap opera or some teenage girls ridden with angst? The dystopia/ Bladerunner atmosphere does not even come into play when you wonder what fragile weakness you player has just revealed as you look to frame a nameless player as the murderer who does not exist.... Catch my drift?

Anyway... I am sorry guys but I must cut it short? I am trying to think of a way to summarise over so many bad aspects but its impossible. Please just go for a look on youtube at game reviewers and you will see why this game has so few stars (i.e. Buyers) compared to the brilliant Dead of Winter, Betrayal at House on the Hill, Pandemic etc.

Seriously... Save your money and buy something legendary like Castles of Burgundy or Pandemic for half the price.
続きを読む
2人のお客様がこれが役に立ったと考えています
違反を報告
レビュー を日本語に翻訳する

Mr. S. Day
5つ星のうち5.0 Fun but Long
2013年1月23日に英国でレビュー済み
Amazonで購入
Amazing game. Unfortunately I din't get it with Amazon in the end as it was sent by courier who failed to leave any note the two times they attempted to deliver. And I only discovered this when I came on to Amazon to track it. Due it being over Christmas I was given two options: - Go to the far side of London to collect or have it delivered on 27th (The last day they would hold it before returning it to Amazon). As it was a Christmas Present and I was away this was of no use to me.

Amazon quickly refunded the money but the delivery company were useless.