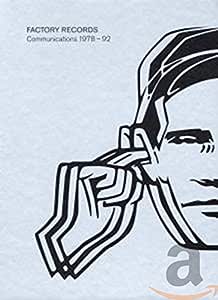 Limited edition 2009 four CD collection, a tribute to the great Factory Records label as well as a dedication to the label's founder, the late Tony Wilson. The project celebrates 30 years of arguably the most important label in UK pop history, collating rare and obscure tracks from a diverse range of acts. Features 63 tracks including cuts from New Order, Joy Division, The Durutti Column, Happy Mondays, Electronic, A Certain Ratio, Section 25 and many others. Sleeve notes written by Paul Morley. Rhino UK.

Colin McCartney
5つ星のうち4.0 If you've ever wondered what Factory Records was about, here's your chance to find out
2009年1月20日に英国でレビュー済み
Amazonで購入
If you already own "Palatine" of course (which this reviewer doesn't - his younger self saw compilations as a sell out!) you might not want to bother with this release. Many have already commented (Amazon reviews and elsewhere) upon the similarity between this and that aforementionmed previous Factory box set but, in his compiler's note to "Communications" Jon Savage admits that "Palatine" was a starting point on which he was trying to improve - so one way to approach this is as "Palatine" mk 2.

No doubt some fans will have seen the track listing and felt disappointment that some crucial artists are missing (Abecedarians? The Wendys?) but, as Savage goes on to point out "to include everything would be impossible as well as barely listenable".

I may as well get my other gripes out of the way now: Section 25, Durutti Column and A Certain Ratio were three of the best bands of all time, never mind on Factory but this collection doesn't always showcase their best material - and is a wasted opportunity in that respect. Also there are a few pointless inclusions on here - how many people purchasing this will not already own "Blue Monday"? Zero. And "Get the Message (DNA Mix)"? The beginning of the end for Factory that one if you ask me.

Anyway, these are minor criticisms - this really is a rather well put together package - sleeve notes by Paul Morley at his more readable (no "Why are New Order?"-type stuff), 100+ words on each and every track by LTM's James Nice. And then there's the music...I think I'll let that speak for itself but here are a few hidden gems: "Baader Meinhof" (unless you're already a member of the Fac-2 Owners' Club), "English Black Boys (hadn't realised Dennis Bovell had ever done anything for Factory?), "Reach for Love" (of course,...typified the Factory sound by being atypical). Also, disc 4 has a nice early nineties home-tape/Balearic feel to it - probably the only one of the four discs you could play at a house party without raising eyebrows.

So, a creditable attempt by Rhino to round up my all-time favourite record label. Factory re-invented music and now more than ever is the time for re-invention - so check it out.
続きを読む
18人のお客様がこれが役に立ったと考えています
違反を報告
レビュー を日本語に翻訳する

Paul Ess.
5つ星のうち3.0 Missed Opportunity
2009年6月7日に英国でレビュー済み
Amazonで購入
The compilers of this often brilliant but ultimately frustrating collection have - considering the magnificent back-catalogue they've access to - made the fatal mistake of cowing to ill-conceived, well dodgy ideas of commercialism.
Ie: including 7 tracks by the awful Happy Mondays; the completely worthless (and insulting!) 'World in Motion'; another re-mix that we just don't need of the over-rated 'Confusion'...
This level of laziness/pandering is inexcusable.

Briefly: CD 1 is the finest series of music thus far committed to disc. CD 2 ditto but slightly less so. CD 3 sees an alarming drop in quality but still contains a few gems. CD 4 is a stinker.
Major good things: finally the superb 12" 'Temptation' on disc; 'Hymn From A Village', 'Ceremony', Section 25's 'Looking From A Hilltop', the Distractions 'Time Goes By So Slow'...
Major bad things: all of CD 4, too much Mondays (one representative track would've been more than enough), nowhere near enough critical perspective (compiler Jon Savage is usually reliable - he's obviously been caught on a bad day) and the usual Paul Morley contributions, which are now unfortunately - in relation to Factory Records anyway - morosely repetitive and meandering.
Morley's own epic: 'North by Northwest' suffered identical faults to this set but was a worse offender; he had a much bigger pond over which to cast his net.
I like Morley a lot but enough already; his seemingly inevitable outpourings have become as predictable as the label instinctively and resolutely wasn't.

Baddest bad in the world: with all the Crispy Ambulance to choose from - they pick 'Deaf' - their worst song.
Bestest best in the world: 'Tell Me' by Life. The most beautiful, energetic recording ever on Factory Records; this, by all that's good in the world, is the crucial reason why '1978 - 1992' SHOULD exist.

'Communications' should be the greatest compilation of music ever released (the Zoo compilation 'Uncaged' currently holds that noble distinction). The first two discs comfortably achieve this, but an overall lack of objectivity and lazy over-reliance on their most profitable but artistically suspect turns designate it (hurtfully) a middle of the field also-ran.
続きを読む
4人のお客様がこれが役に立ったと考えています
違反を報告
レビュー を日本語に翻訳する

Goran Ekstrom
5つ星のうち2.0 Think I was fooled by New Order
2009年2月28日に英国でレビュー済み
Amazonで購入
Having bought a few Factory 12" singles during the eightees my perception of Factory Records was still "cool" some twenty years later. Well, after having listened to the four CDs a couple of times now I will have to revise that opinion to "mainly a british seventees and eightees indie pop record company with a few good electro pop releases". Box is nice with a printed book describing all the tracks and a (sorry) stupid how-great-we-where text written in an annoying look-how-great-I-am-with-words style, probably written for the local fan club, i.e. you can barely get through it. I would much rather have had a more detailed history of Factory Records.
続きを読む
2人のお客様がこれが役に立ったと考えています
違反を報告
レビュー を日本語に翻訳する

onsenkuma
5つ星のうち4.0 a perfect imperfection...
2009年1月29日にアメリカ合衆国でレビュー済み
Amazonで購入
It's been pointed out elsewhere, but this shares far too many tracks with 'Palatine' to earn a fifth star. Personally, I would have loved to have seen a few more Benelux or other oddities (e.g. ACR's 'Brazilia'). Still, it's pretty hard to knock this compilation based on what it DOES include. If you don't already own 'Palatine' then this will give you a taste of what the label was all about, from the beer & skunk sounds of Joy Division's 'An Ideal for Living' ep through to the beer & ecstasy days of New Order' 'Fine Time' through to the beer & crack funky gasps of the Happy Mondays. The Factory 'sound' spiked simple pop and dance-rock with liberal doses of chaos and shambolic post-punk amateurism. Perfectly imperfect. Tony Wilson was a visionary. When you're done listening to this go out and buy Section 25's 'Always Now', ACR's 'To Each', the Durutti Column's 'Another Setting', New Order's 'Movement', the Happy Mondays' 'Thrills Pills & Bellyaches' and (no brainer) Joy Division's 'Closer'. The LTM label (UK) is doing a nice job of re-releases from the Factory catalogue...
続きを読む
10人のお客様がこれが役に立ったと考えています
違反を報告
レビュー を日本語に翻訳する
すべてのレビューを参照します
Amazonプライム会員ならお急ぎ便、日時指定便が使い放題
さらに、映画もTV番組も見放題。200万曲が聴き放題 。クラウドに好きなだけ写真も保存可能。
> プライムを無料で試す