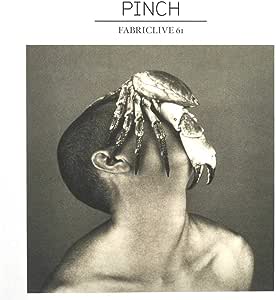 Looking back on the myriad of ways that the genre now known quite loosely as `bass music' has mutated, one of the key figures in its evolution would have to be Bristol's Rob Ellis, better known simply as Pinch. His fascination with what the outer limits of the dub sound can achieve, has made him a distinct figure within the fluid group of like-minded dubstep musicians that defined the so-called Bristol sound. In 2003, a Kode9 set became the stepping-stone that was his initial contact with dubstep at London's seminal FWD>>. This inspired him to start the first pure dubstep night outside of FWD>>, Subloaded, in his hometown. With the city's love of dub and long musical lineage, plus Pinch's dedication to the importance of the actual sound, it quickly formed a dedicated community and became a yardstick by which other nascent events were measured. This had all been driven by a key moment in his own musical evolution which as he explains, "I lost interest in D&B and started buying minimal Basic Channel style techno, garage, grime and electronica instead - trying to mix them up together," pre-empting the dominant sound of 4/4 dub-techno embraced by today's crop of young producers, like Hessle Audio, who regularly cite the Bristol sound as a big influence. This embrace of a starker, dubbier sound became the seed from where his Tectonic label grew, and by championing artists like 2562, led to his eventual release of work with dub legend and King Tubby apprentice, Scientist. His FABRICLIVE offering comes hot on the heels of mixes from Pearson Sound and an artist with whom he's just recently released a collaborative album on Honest Jon's, Shackleton. These are all producers who work in a similar vein, that is, impeccable attention to sound detail, continual experimentation with rhythm whilst always maintaining a definitive `sound' which can be traced throughout all their productions.

The mix itself combines all of Pinch's loves, a blend of both melodic mood-pieces, driving dub-techno and the odd mid-range bass wobble masterfully planted to maximum effect. This is all peppered through in post-production with little vocal samples, mostly supplied by Bristol MC Jakes, that fully form the mix, like the grain in wood, supplying body, making it more than just a sum of its constituent parts. Pinch kicks things off somewhere through a Distal production, a screwed hip-hop vocal making it sound like a paranoiac's reimagining of ghetto-tech. This quickly sets the tone - managing to juggle the ominous with the upfront, like the Lynchian strings of `In Dreams' which phase seamlessly into the manic energy of Boddika and Joy O's recent smash `Swims'. The mix really clips along, testament to Pinch's skill behind the decks, most tracks only playing out for a couple of minutes at most. There's a nod to the pure dub-techno of Basic Channel, with a cut from Shed's side-project EQD, mastered at that other altar to all things bass, Berlin's Hard Wax. This drives into another major influence, with Pinch's own remix adding some rolling sine-waves to the guttural vocals of Prince Green on Henry & Louis' neo-dub. A sledgehammer wobble both heralds, and ends, the central section of the mix, with Pinch's collaborative effort with Photek, and Chestplate boss Distance's weighty `Blue Meanie'. This central nub almost functions as a showcase, Pinch demonstrating some of contemporary dubstep's many flavours: the industrial sounds of Emika, Roska's clattering drums, Addison Groove's use of repeating vocals as a rhythmic weapon and the shimmering techy keys of Goth Trad. The final two tracks are supplied by a couple of the most promising young producers to emerge in the past few years, Londoner OM Unit and Tectonic's own Illum Sphere. `Pressure' certainly doesn't let up, presenting us with a relentless squiggling synth-line awash in a storm of feedback then changing tack considerably into a steady pulsing beat. Pinch often talks of psychedelic dub, and here Illum Sphere demonstrates it wonderfully, toeing the line between instrumental breakbeats and even deep house, with its ethnic drums, distorted strings and a pitched down warble. This isn't the true end as the mix is bookended with the rest of Distal's track in order to achieve a perfect circularity

Jonathon Duarte
5つ星のうち5.0 This is the music that one purchases.
2013年4月4日にアメリカ合衆国でレビュー済み
Amazonで購入
Since first listening to this mix I have been hooked and decided that I must own a hard copy of it.
From the first song to the last, the album is packed with galvanizing rhythms and the perfect amount of bass (I love all things bass)
This is my favorite mix in the Fabric Live series. It is a must have for any fan of underground electronic music.