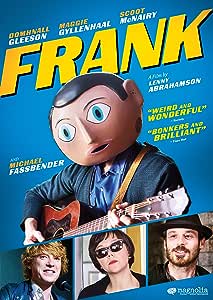 ShogunTee
5つ星のうち5.0 My Favorite Movie from Sundance, My Favorite Movie of the Year
2014年9月13日 - (Amazon.com)
Amazonで購入
The thin line between creative genius and insanity is walked with humor and poignancy in Frank, a quirky tribute to those bands that live on the musical margins where practically nobody can find them. When those bands dare to compromise and make their way into the mainstream, what gets lost in the pursuit of acceptance? The most unlikely music biopic you're ever likely to find, Frank asks that question and many more while honoring those who have journeyed to the "far corners" of artistic expression.

Jon (Domhnall Gleeson) is a bored office worker in a small, English town where nothing ever happens. He aspires to be a musician and songwriter, but can't find his own unique voice to express it, so he writes bland little songs about his bland little town, while also wishing he had some sort of troubled childhood to inspire him. He spends much of his time tweeting about nothing important to his handful of followers, and wishing something...anything...will turn things around for him. Practically on cue, he chances upon a man trying to drown himself in the ocean. Turns out he's the keyboardist for a band playing in town, the unpronounceable Soronprfbs, and Jon mentions off-hand that he has a few skills in that area. The band's goofy manager Don (Scoot McNairy) asks "You play C, F, and G?", and replying in the affirmative, suddenly Jon is a part of the strangest little family on the planet, but not everybody is happy to see him there.

Discovering that the band's leader, Frank (Michael Fassbender), wears a fake papier-mâché head all hours of the day is disconcerting at first, but Jon soon discovers that he's something of a musical savant. An aimless one whose style is too idiosyncratic for mass appeal, perhaps, but there is genius inside that giant dome of a head with the apple pie eyes and emotionless expression. Thinking they were getting away merely for a weekend, Jon instead sticks around at a cabin retreat for months while the band records their first album. Since they have no money, Jon gives up his nest egg to help them out, while also recording the sessions and posting them online to help generate buzz. His attempts to gain the group some fans draws the ire of Clara (Maggie Gyllenhaal), the team's eternally negative Theremin player, whose focus is solely on maintaining the band's place on the fringes. Much of the film's humor comes from their exchanges as she systematically ostracizes him from the other band members, while Frank seems enamored at the idea of actually having fans. As their YouTube followers expand, Jon books them a potentially star-making spot at SXSW, which causes greater ideological clashes between authenticity and viability.

Unlike any film about musicians I have ever seen, it's not necessarily a downer like the Coen Brothers' Inside Llewyn Davis, which was all about one man's inevitable failure. Nor is it necessarily a familiar tale of a group hitting their creative stride and finding legions of adoring fans. It's about how one goes about finding their own signature voice, and embracing one's unique qualities rather than pretending they don't exist. The Soronprfbs' problems, at least from a musical standpoint because they have plenty of personal ones, don't begin until Jon starts to compromise everything they stood for. They may be a chaotic mess of conflicting egos and personalities, but at least they are authentic.

At the same time, the film speaks to the issue of mental illness, with the child-like Frank at the center of it. A number of the group's members met in a mental ward, and we see the impact this life of a musician can have on an unstable mind. Fortunately, the film doesn't spend too much time trying to explain why Frank exists underneath that giant head. It's enough to assume that it's some sort of defensive measure or shell against the world. Writer Jon Ronson, who based the story on his own experiences with the real-life band led by Chris Sievey, chooses to honor their eccentricities, recognizing it's what makes Frank and Soronprfbs special.

Directed by Lenny Abrahamson, the film is much like the band itself; chaotic, unpredictable, and utterly lovable. The music is catchy if a little bit messy, but it's especially good when you consider every actor is performing it live. In his most complicated role yet, Fassbender shows his acting mettle in a role where his face is barely ever seen, and yet he's a commanding presence still. Gyllenhaal steals the show as the angry and mercurial Clara, while Gleeson continues to assert himself as a stable leading man presence.

While some will consider Frank a little too "out there", those who embrace its peculiarities will find it a rare gem of a film that defies expectations and celebrates inventiveness above all.

Amazon Customer
5つ星のうち5.0 Brilliant! Fantastic!
2015年1月29日 - (Amazon.com)
Amazonで購入
I was skeptical of this movie. After watching it, I was fascinated. It is very weird and many of the characters are not likeable. Frank is reportedly a musical genius, but I didn't buy it while watching. Now I am certain he was. Most importantly, this film caused me to find out what I could about Frank Sidebottom, who this film is loosely based on. Aside from the big head, the connection seems tenuous. After watching a lot of videos of Frank Sidebottom, I see a greater connection. Both Franks have maintained that connection to wonderment and creativity that most of us have lost as we grew up. It seems childish and disjointed. That is the genius of it. Frank is not a mean, negative, sarcastic, out there person. He is open and generous and ready to explore anything. The rest of Frank's band projects their own world onto Frank. He gives them permission to explore and be what they are. They become very protective of Frank and guard him quite jealously. Maybe what they are protecting is the universe they've created around Frank. I see this in both the musical Frank of this film and in the Frank Sidebottom character. To me, the brilliant song "I love you all" perfectly encapsulates this. When I first heard it, I thought the lyrics were totally wacky and a send-up of pretentious artists. The song worked its way into my consciousness and now permanently resides there. I see the verses as a brilliant reflection of the chorus. The verses are a list of things one might see. The chorus says simply, I love you all. This incomprehensible litany of nouns and adjectives merely describes a wonderment of the world around us. It is all fantastic. Our egos and fears and preconceptions get in the way. I am enriched by entering this crazy world of Frank and Frank Sidebottom. Watch the videos of Frank Sidebottom that Chris Sieve left behind and then watch this film. It may not make sense at first, but it will add an extra dimension. Time for me to watch Frank again!
続きを読む
4人のお客様がこれが役に立ったと考えています
レビュー を日本語に翻訳する

Robert Hayes
5つ星のうち4.0 A quirky combination of indie music and mental illness
2014年10月30日 - (Amazon.com)
Amazonで購入
I wasn't sure what to expect from FRANK, although the trailers I saw for it definitely piqued my interest with what seemed to be a quirky, fish-out-of-water story. For what it's worth, that is what the film is initially. However, and I'll be as vague as possible to avoid spoiling anything, it ends up being a potent examination of mental illness that was quite touching. Domnhall Gleeson plays Jon, an aspiring musician who joins a band led by a mysterious man, Frank (Michael Fassbender), who always wears a giant papier-mache head over his own. Together, they journey out into the country to record an album and, eventually (due to Jon's constant stream of social media information) go to Texas to play SXSW. While that might describe the skeleton of the plot, what really makes this worth watching is the idiosyncrasies and quirks of the main characters, their humorous interactions and antics, and Jon's desperate attempt to make himself feel like a part of the group. You really get a sense of him as an outsider, although the people he surrounds himself with are probably even more societal outsiders than he is. The music they make isn't mainstream by any means. In fact, it's completely removed from that: it comes from the soul. I didn't particularly care for a lot of it, since it came off sometimes as being weird for weird's sake, but the conviction with which it is played and the enthusiasm of the band playing it makes it tolerable, even endearing. Everyone gives an excellent performance, especially Michael Fassbender who is able to make his character work despite having his head covered for most of the movie. Domnhall Gleeson is good too, but I would like to give special mention to Maggie Gyllenhaal. She was hilariously weird in parts, and other times deadly serious, but overall you got a good sense that she cared for Frank. Scoot McNairy also has a small-ish role, and he was decent as well. Overall, I like this film a lot despite not caring for the music in it. This is one of the best films I've seen this year and I would highly recommend others to see it as well.
続きを読む
3人のお客様がこれが役に立ったと考えています
レビュー を日本語に翻訳する
Amazon.comのカスタマーレビューを見る(194) 5つ星のうち4.0
Amazonプライム会員ならお急ぎ便、日時指定便が使い放題
さらに、映画もTV番組も見放題。200万曲が聴き放題 。クラウドに好きなだけ写真も保存可能。
> プライムを無料で試す