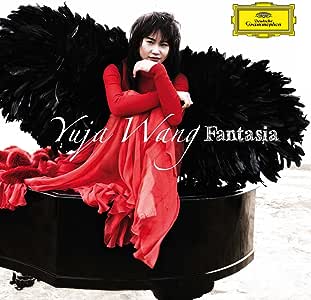 The Yuja Wang album that everyone has been waiting for wows with musical miniatures that are short, sweet, and huge in impact. These encore pieces by Scriabin, Gluck, Rachmaninov, Chopin and others will enthrall Yuja Wang's fans with challenging technical demands and the bravura precision of her execution. The melding of her legendary technical skills with her interpretive intelligence transforms this album of treats into a profound musical experience. The variety of styles - which includes neo-Classical, Impressionist, Romantic, jazz - in addition to the quality of the arrangements of pieces that are adaptations, provides a welcome and yet unique listening experience. Yuja Wang's popularity extends from the concert hall to the Internet. In a year on YouTube, a handful of Yuja Wang's pieces clocked a phenomenal quarter million views.

I. Giles
5つ星のうち5.0 A collection of encores that will delight as well as astonish
2012年5月30日に英国でレビュー済み
Amazonで購入
This well recorded disc from 2011 joins the growing discography of this outstanding young pianist.

Yuja Wang, on this disc, plays a wide range of her favourite encores. Suffice it to say that these performances are spectacular or sensitive as appropriate and that none of the spontaneity of her many live performances has been lost in these studio versions. This set of encores differs in intent from many others such collections of encores. To understand why, the following quote from Yuja Wang herself may help to explain:

An encore, as described by Yuja,is 'something that is both ephemeral and truthful. It's a temporary mood, reciprocated by the audience. They're pieces I've played for so long that they've become a part of me. It's a king of record of how my heart is feeling at the moment...... People assume that an encore is something showy, but, for me, it's a little moment of tenderness from the heart.'

The primary intention of this disc is therefore, the sharing of the joy of the moment of creation rather than any intentional delight of showmanship. Nevertheless it is also true to say that showmanship is inevitable as a consequence of many of the pieces played in the program. Many the pieces could be described in this way and particular favourites will be chosen according to individual listeners' personal preferences.

To give some sort of idea of the variety and range of the pieces and playing presented here, the Tritsch-Tratsch Polka is an especial joy as it was so much better recorded than the U-Tube alternative. The Carmen and Danse Macabre have all the sparkle and devilry associated with the arranger, Horowitz. The Sorcerer's Apprentice, arranged by Staub and adjusted by Yuja to fit her hand-size, is delightfully ear-tickling and, by contrast, the Chopin waltz is meltingly beautiful. The Schubert shows a wonderful control of developing textures building to an emotional peak in a surprisingly short time. The rest of the program is equally enjoyable and varied, finishing with a spectacular version of the Liszt/Horowitz arrangement of the Saint Saens Danse Macabre.

The DGG recording is excellent with accurate piano sound and not balanced too close. There is a real sense of air around the sound stage.

This is a very attractive and nicely varied program played to perfection and matches Yuja Wang's own description above of her approach to encores. There are also two concert performances of concertos worth considering both of which radiate the same sense of joy in music making. There is a 2009 Mendelssohn concert on DVD featuring her in the first piano concerto and the Piano sextet. There is also an outstanding Prokofiev third piano concerto recorded at Lucerne with Abbado in 2009 and available as a DVD or Blu-ray.

In the meantime, I would suggest that this disc of encores deserves serious consideration as purchase option
続きを読む
9人のお客様がこれが役に立ったと考えています
違反を報告
レビュー を日本語に翻訳する