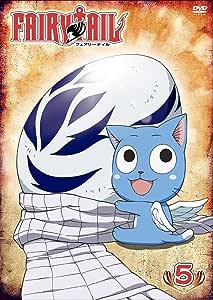 T. Alexander
5つ星のうち5.0 Oración Seis
2014年1月31日に英国でレビュー済み
Amazonで購入
This fifth volume of the 'Fairy Tail' anime contains a further twelve episodes of the entertaining series and begins one of its better storylines, the Oración Seis arc.

Before we can get to the main focus of the volume, the first couple of episodes are semi-filler stories. The first of these two episodes (episode 49) deals with the immediate aftermath of the Fighting Festival and has to deal with the imminent arrival of a reporter from Sorcerer Weekly magazine. This was an entertaining episode but it does lose a little importance due to the visit by the reporter being moved from before to after the Fighting Festival arc as in the manga it was the article that the reporter wrote that was the last straw for Lexus and caused him to set the arc in motion. The move just made the event comedic filler. The second of the semi-filler episodes (episode 50) sees Lucy worrying about her love life and Juvia trying out a potion she got from a shady merchant. This episode what some entertaining moments and is at least partially based on a bonus story from the manga but is mostly just fluffy comedy.

Episode 51 sees Lucy's father come turn up again but she still wants nothing to do with him. Despite this however she is still ready to fight for him when she hears he could be in danger. This was a good episode and allows Lucy to show what she is truly capable of when she puts her mind to it and gives here the chance to shine when her friends aren't around.

The rest of the episodes in this volume (52 to 60) cover the beginning of the Oración Seis arc that sees Fairy Tail team up with three other guilds (Blue Pegasus, Lamia Scale and Cait Shelter) to take down the powerful Dark Guild. Although the Oración Seis number just six members, they are all extremely powerful and they are looking for a powerful magical weapon that could spread darkness across the world. This is definitely one of the better arcs of the series and introduces a number of interesting characters for both the enemies and the other allied guilds. The arc also introduces Wendy and Carla who will become important to the series as a whole and sees the return of an old enemy. The anime also adds somewhat to the background of the Oración Seis members and adds a few more scenes to some of the minor fights of the arc. The action in general in the episodes of this volume is very entertaining. Gray and Lyon fighting Racer was very good with some nice powers and tactics on display. Lucy also gets a good fight as she goes up against Angel, who has a history with Lucy's Celestial Spirits.

The animation of the series remains as good as it always has been for the series, as does the voice acting for the English dub (the Japanese is included as well of course). The voices for the new characters introduced in this arc are all relatively good. Chris Guerrero is good as Blue Pegasus' Ichiya as are Kent Williams as Lamia Scale's Jura and Brittney Karbowski as Cait Shelter's Wendy. The only voices I am not much of a fan of are Micah Solusod as Oración Seis member Midnight and Jad Saxton as Cait Shelter's Carla but I am sure I will get used to them as the show progresses.

The extras of for the volume are somewhat basic consisting of the usual cast commentaries, trailers and textless songs.

Overall this fifth volume of 'Fairy Tail' is a very entertaining one and is well worth a full five stars.
続きを読む
5人のお客様がこれが役に立ったと考えています
違反を報告
レビュー を日本語に翻訳する

James Lester
5つ星のうち5.0 Back with a Bang!!
2013年12月9日に英国でレビュー済み
Amazonで購入
After waiting almost the entire year for this, Fairy Tail part 5 is finally hear. I am very pleased to say that it dosnt disappoint. Everything about it form the first 4 parts, great visuals, memorable characters, awesome fights are still present along with the beginning of a new story arc that makes me impatient to see how it ends. If you enjoined the First season of Fair tail (parts 1-4) then i Highly recommend this to continue the story
続きを読む
違反を報告
レビュー を日本語に翻訳する

pw242
5つ星のうち4.0 Fairy Tail is great... subtitles disappointing.
2014年12月4日に英国でレビュー済み
Amazonで購入
Fairy tail is consistently good. Unfortunately the English subtitles are very pixelated. I find this distracting and a strain to read. Why they couldn't have spent an extra couple of quid to do it right is beyond me. I'm using PowerDVD 14. Maybe I am doing it wrong?
続きを読む
違反を報告
レビュー を日本語に翻訳する

Amazon Customer
5つ星のうち5.0 I Loooove it!
2016年2月18日に英国でレビュー済み
Amazonで購入
Another great series of Fairy Tail with Natsu and Happy.