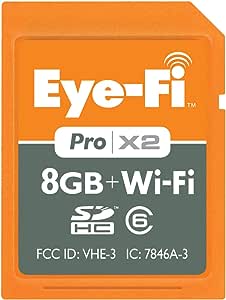 JEFF
5つ星のうち1.0 Poor management, not as helpful as you think, uploads duplicates, NOT class 6
2013年5月13日にアメリカ合衆国でレビュー済み
Amazonで購入
I thought this would be a useful product, I had for years until I owned it. What I had not considered is I am rather meticulous about the management of my pictures. So, to have the software work when it wants (Really) and download pictures from card (also when it wants) is just annoying. I tried disabling the option to xfer altogether but consistently turns itself back on. (Will be uninstalling next.) Today, it started transferring duplicates of photos. I powered my camera off and it continued to xfer. So, I am holding the eyefi card in my hand and it downloads about another 10 pictures (with progress indicator and all) for a few minutes. So, for whatever reason- it was "downloading" duplicates without power even hitting the card. Obviously really buggy software. When you consider this software has the ability to delete photos on the card as well, ditching it is a no-brainer. Photos are just too precious.

Lastly, this card is advertised as a class 6 which, in a perfect world, transfers at 6 MB /sec. Well this card hits 3-4 on a good day. Tried multiple card readers and it never reaches 6 MB/S. I have a class 6 Transcend and I consistently hit 6, sometimes even 7 MB/Sec.

I wanted to give this 1 star but I still see too much potential to do this. I know some people WILL find it useful and perhaps less buggy. So, I marked it as two stars. There is a specific task this card would be perfect for. A smaller point and shoot that is solely used to shoot product. If any aforementioned problems happened, you would not lose a memory- just a moment of time. This would be perfect for an eBay store, for example.

EDIT: I dropped rating to 1 star for another nuisance. I only use this on one camera and during the same shooting session, it will split photos up between two folders. My camera has never done this with any other card. There are a few other WiFi xfer cards on Amazon, go find em because this product is poorly designed!
続きを読む
2人のお客様がこれが役に立ったと考えています
違反を報告
レビュー を日本語に翻訳する

Dawn0fTime
5つ星のうち1.0 Not compatible with Nikon D80
2011年12月7日にアメリカ合衆国でレビュー済み
Amazonで購入
This sounded like a great idea in concept. I checked the manufacturer's site before purchasing and saw that the Nikon D80 was listed among the supported cameras. Excellent! I spent 3 days, off and on, trying to get my iMac or my iPad to recognize the card once I set it up with the vague instructions included in the packaging. I tried the manufacturer's support site and other forums around the 'net. Nothing helped. I finally fired off an email to Eye-Fi for help. They were surprisingly quick to get back to me (the one point in their favor), and they gave me a list of steps to perform to generate and send a log file. The next reply, again received rather quickly, was that the card can't be used in Direct Mode on the Nikon D80, only in Wi-Fi mode. (Apparently there's some metal inside the D80 that causes interference, and there is no work around according to Eye-Fi.) Since I can't guarantee there'll always be Wi-Fi available while I'm shooting (even if there was, do I really feel like setting it up every time I'm on a different network?) the card is useless to me. It essentially functions as an overpriced SDHC card. Thank goodness Amazon has such a great return policy!
続きを読む
違反を報告
レビュー を日本語に翻訳する

iamtheoneoff
5つ星のうち1.0 EyeFi Killing These Cards on 09/16/16 - Don't buy a brick!!
2016年7月1日にアメリカ合衆国でレビュー済み
Amazonで購入
As a current eye-fi owner of X2 cards, I wouldn't put any trust in this company. They just communicated their intentions to brick 14 models of their older cards, including the X2 series on 9/16/16. Complete BS! Will never buy their cards again!!!
続きを読む
4人のお客様がこれが役に立ったと考えています
違反を報告
レビュー を日本語に翻訳する

Mason Bryant
5つ星のうち2.0 more of a gimmic
2012年5月26日にアメリカ合衆国でレビュー済み
Amazonで購入
So this thing is supposed to make my life easier right? Well it doesn't: the software is buggy, it stops and starts downloads and then something (either the computer, or the camera) needs to be turned off and on for it to start again. It is just a pain.

Also: it is supposed to make it so you can upload raw images on your iDevice, right? Cool, you can. You just can't look at them, edit them, or share them on your iDevice. Customer support says something or the other about apple not helping them with the drivers.
続きを読む
違反を報告
レビュー を日本語に翻訳する

Jerry in SoCal
5つ星のうち5.0 Super Slick High Tech Goodness THROUGHOUT !
2010年4月2日にアメリカ合衆国でレビュー済み
Amazonで購入
This is one of those products that sounds too good ... this one really IS! It is really easy to set-up, and the included software is very comprehensive. Out of the box it is very easy to use, but nicely customizable for geeks like me. Link this to a Flickr account, link your WiFi photo frame to the same account and BOOM you have an effortless display. Hmm, that sounds PERFECT for Grandma! This card has a lot of cool uses if you really think about it. You can keep the family updated with pics while you are on vacation. No effort required. This is a well engineered, well implemented product that is much more than a gimmick. It delivers exactly what it promises.
続きを読む
3人のお客様がこれが役に立ったと考えています
違反を報告
レビュー を日本語に翻訳する
すべてのレビューを参照します
トップへ戻る
Amazonについて
Amazonでビジネス
Amazonでのお支払い
ヘルプ＆ガイド
日本語ショッピングのための言語を選択します。 日本ショッピングのための国/地域を選択します。
© 1996-2020, Amazon.com, Inc. or its affiliates