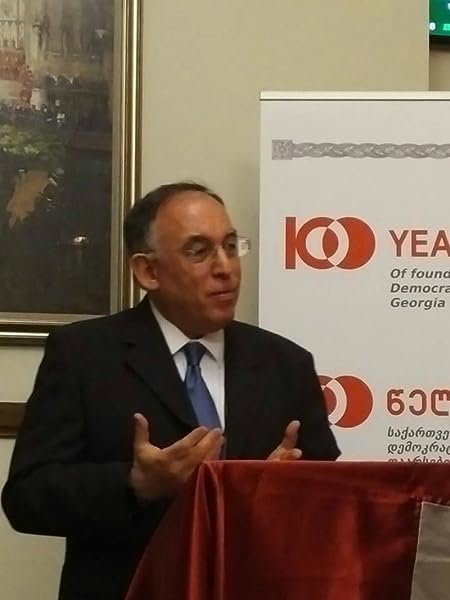 "A sympathetic, lucidly written, and politically literate account of the first Georgian republic, which makes exhaustive use of the accounts of foreign observers as well as some of the major leading figures."--Donald Rayfield, author of Stalin and His Hangmen "European History Quarterly"

"A vivid history of the Republic."-- "New European"

"A well-researched, well-written and engaging account. . . . A welcome and necessary addition to the literature."-- "European History Quarterly"

"As Lee reminds us, this Menshevik-dominated government backed free elections, freedom of the press, an independent judiciary, parliamentary rule and free trade unions. Perhaps its most impressive achievement was to carry out agrarian reform, allowing peasants to buy land at reasonable prices and not resorting to the catastrophic forced collectivization the Bolsheviks later employed. Visiting Georgia, a Western socialist like Karl Kautsky could declare it the 'antithesis to Bolshevism.'"-- "New York Times"

"Covering a crucial but strangely overlooked period in the fevered evolution of socialism, we've been waiting for this book for a long time. Fortunately, it arrives excellently written and researched."--Peter Nasmyth, author of Georgia: In the Mountains of Poetry "European History Quarterly"

"In a clear and succinct style, Lee paints a sympathetic portrait of this remarkable experiment in democratic socialism. Lee has brought this almost unknown story out of the shadows, giving it its proper place in the historiography of socialism and the Russian Revolution."--Stephen Jones, author of Socialism in Georgian Colors "European History Quarterly"

"Lee calls 1918-21 a 'forgotten revolution.' The story of that revolution is worth remembering, and has never before been told so well."-- "Eurasianet"

"Lee has written a remarkable book, which tells the history of the First Georgian Republic. . . . It does, however, do more than that. By placing the Georgian experiment in its historical and international context, it gives us important insights into the nature of nation-building, socialism, Stalinism, and even contemporary Russia."-- "Dissent"

"Lee provides a fascinating account of what the country briefly looked like under Menshvik rule and how this compared to the regime established by Georgia's most famous son, Stalin."-- "Europe Now"

"This is an important book. It is the first study in English of the Menshevik government in Georgia between 1918 and 1921."-- "Chartist"

Eric Lee is a journalist and historian who has spent over thirty years researching independent Georgia. His previous books include Saigon to Jerusalem: Conversations with Israel’s Vietnam Veterans and Operation Basalt: The British Raid on Sark and Hitler’s Commando Order.

Georg A.
5つ星のうち5.0 A very sympathetic work!
2017年11月6日にドイツでレビュー済み
Amazonで購入
It is the first ever book written written in English specifically about the history of the democratic republic of Georgia 1918-1921. Eric Lee tries to unveil the roots and main characteristics of Georgian social-democracy which is still unknown for many in the west. This hidden period of the history of Caucasian countries is extremely interesting, as after the collapse of the Russian Empire Caucasian crossroad between Europe and Asia became a target for Ottomans, Red and White Russians as well as for the European powerhouses like Kaiser's Germany and Great Britain. The work describes collisions of so many interests in the region and the way Georgian idealists acted at the time of a great warfare. All these is managed in a very simple and readable manner. The book is highly recommended for those interested in the modern histories of Georgia, Caucasus, Russia and East Europe.
続きを読む
役に立った
フィードバックを送信中...
フィードバックをお寄せいただきありがとうございます。
申し訳ありませんが、お客様の投票の記録に失敗しました。もう一度試してください。
違反を報告
レビュー を日本語に翻訳する

Tor A.
5つ星のうち1.0 A disappointing tale about heroes and villains
2018年8月16日に英国でレビュー済み
Amazonで購入
I started reading this book with great expectations. I was severely disappointed. Even though there is much to learn from the book about the events that took place, the writing is very -- I would even say extremely -- tendentious. This is definitely a tale about heroes and villains, and the main heroes are of course the Georgian government during the "experiment" period, and the main villains are the Bolsheviks, who did absolutely nothing right, and exploited every opportunity to make their bad intent come true. This bias is revealed at every corner, most irritatingly by the use of value-laden language to describe the intent, actions, etc. of the various protagonists and factions. It permeates the whole book from beginning to end. Also, the wider historical context for the "experiment" is largely lacking. In the light of the Russian civil war and foreign interventions, the Georgian "experiment" looks a little less pleasant, since the Georgian leadership sought help and alliance from the very same imperialist powers that militarily sought to crush the fledgling communist state in Russia. If you are interested in history writing as a kind of partisan propaganda effort, read this book, if, on the other hand, you prefer balanced history writing where the author manages to keep some emotional distance, keep away from it.
続きを読む
役に立った
フィードバックを送信中...
フィードバックをお寄せいただきありがとうございます。
申し訳ありませんが、お客様の投票の記録に失敗しました。もう一度試してください。
違反を報告
レビュー を日本語に翻訳する

Roy Nitzberg
5つ星のうち5.0 You must read this book!
2017年11月16日にアメリカ合衆国でレビュー済み
Amazonで購入
Congratulations to Eric Lee for having written one of the most important books coming from the democratic Left in a long time, one that is excellently researched and, stylistically, a pleasure to read. This is the story of the short-lived Menshevik-led, democratic socialist Georgian Republic (in the Transcaucasia region of Eastern Europe), that existed only between 1918 and 1921, eventually to be crushed by Russia's invading Red Army. Georgia’s most infamous son, Joseph Stalin, sharpened up his claws destroying that Georgian “experiment,” assisted by yet another monster, Lavrentiy Beria. At the time, Lenin is said to have known nothing about the Red Army's invasion, while Trotsky supported the decision of the Bolsheviks to help “consign" those Mensheviks--who had no interesting in joining the newly formed Soviet Union--to the “dustbin of history.”

One can imagine how Georgia would have been a considerable thorn in the side of the Russia’s Bolsheviks: Here was a a group of anti-Lenin orthodox Marxists aligned with Julius Martov and Georgi Plekhanov in Russian, with Karl Kautsky in Germany, and with (unfortunately not as well known) Noe Zhordania in Georgia, who created a liberal democratic society that respected and encouraged free trade unions, free elections, and allowed freedom of the press and the freedom of other political parties to elect representatives to the government. The Bolsheviks had very little popular support but had the right to organize--something they did quite well, creating what the author refers to as a “fifth column,” that would eventually help in the overthrow of the new Republic and the execution of untold thousands of those opposed to the Bolsheviks. Georgia showed the world what a democratic socialist republic looked like, as Russia showed us how to assemble a totalitarian monstrosity.

There are some fascinating oddities about the Georgian Republic, including their own version of agrarian reform that included promoting—surprisingly—food and farm cooperatives, allowing poor peasants to lease land and wealthier peasants to purchase it. In some cases, nobles were allowed to keep some of their property. While this was unorthodox, it did allow the land to become quite productive and the well-fed Georgians avoided the mass starvation created by the Russian Bolsheviks who expropriated and nationalized all land, creating a de facto civil war between the Kremlin and the peasantry that resulted in millions of deaths by starvation and, of course, by execution.

When I joined the Young Peoples Socialist League in 1972, I entered having read Michael Harrington’s “The Other America,” some essays by Bayard Rustin, and some Lenin (that’s where I first learned of the “renegade” Kautsky!) and Trotsky. Gradually, I expanded my reading to include Rosa Luxemburg (“The Russian Revolution”) and Kautsky (“The Dictatorship of the Proletariat”), and eventually Julius Martov (“The State and Socialist Revolution”). It was in Martov’s monograph that I first learned of the 1922 Kursky letter, where Lenin searched for a formula through which he could expedite the execution of their political opponents, including Mensheviks. (Did I mention that Bolsheviks seem to be particularly fond of executing their opponents? Far easier than having to deal with them through the democratic process.)

It was also strongly suggested to me by a group of older, "more mature" comrades to read Solzhenitsyn’s “Gulag Archipelago” and Wittfogel’s “Oriental Despotism,” both books becoming critical in my own political development.

For our younger recruits and those of “more mature” stature, myself now among the ranks of the latter, I’d like to add this book to the list of essentials. Most leftists have never heard of the Georgian Republic. However, with this book, I hope that situation will change. We democratic socialists have very little to point to and say, “This is what we would like a socialist society to look like.” Here! Now we have a book about “The Experiment: Georgia’s Forgotten Revolution” and one that should be “required reading” among all leftists of all ages!

But my biggest gripe is how the talk of ideology and the practice of Marxism kind of pervades the text. It's inserted at odd times. I think it's done to explain the pressure the new Georgian in the 1920s was under -- the fight between Georgian Bolsheviks and Mensheviks. However, I think it should have been in the first 1/3 and then that was that. A few casual mentions would have been fine.

Saint Facetious
5つ星のうち5.0 History not just of Georgia, but of socialism
2018年7月8日にアメリカ合衆国でレビュー済み
Amazonで購入
An excellent brief of the revolution that occurred in Georgia and the events that followed after 1917. But even more than that, it provides an excellent contrast to forma of socialism, and even perhaps shows the many ways the Soviets were not socialists. Lee writes about the entire socialist movement in Europe, so the reader can easily understand the context of the Menshevik experiment of the country.
続きを読む
役に立った
フィードバックを送信中...
フィードバックをお寄せいただきありがとうございます。
申し訳ありませんが、お客様の投票の記録に失敗しました。もう一度試してください。
違反を報告
レビュー を日本語に翻訳する
その他の国際レビューを読み込む

But, perhaps most importantly, even though the Soviet troops crushed Georgian democracy, you walk away with a sense of hope. When the changes came in Central and Eastern Europe and the former Soviet Union, it was diappointing in many coutries to see the weakness of emergining democracy (if it came at all). Georgia has developed a trade union movement that is one of the exceptions. It is free. It struggles. It is attacked, but springs back. The story of the emergence and re-emergence of the teachers' union is a good example. The fights of the railway workers, another. After reading "The Experiment", even though it was a long time ago, I could not help but wonder if trade unionism and democracy was not hidding in their DNA all of those years.
The idea of greater equality in a democracy cannot die. It is clear that less equality undermines democracy. The problem seems to be in many countries, and not just the US, that political parties and politicians respond to those who have the money. As FDR said, "It is an unfortunate human failing that a full pocketbook often groans more loudly than an empty stomach."
続きを読む
役に立った
フィードバックを送信中...
フィードバックをお寄せいただきありがとうございます。
申し訳ありませんが、お客様の投票の記録に失敗しました。もう一度試してください。
違反を報告
レビュー を日本語に翻訳する

Rosa Angelone
5つ星のうち5.0 easy to read
2018年3月3日にアメリカ合衆国でレビュー済み
Amazonで購入
easy to read. I now have a better understanding of the geography of that area, why different groups and nations wanted to control Georgia. It makes some of the troubles going on currently make more sense and less random. Plus it is an excellent reminder that the future isn't set and just because events turned out a certain way does not mean that other paths weren't available and tried. If you have an interest in that brief period before the USSR solidified and tried to knock off all the other stories in history or are curious about a small country trying to create a space for itself this is an excellent book to read.
続きを読む
役に立った
フィードバックを送信中...
フィードバックをお寄せいただきありがとうございます。
申し訳ありませんが、お客様の投票の記録に失敗しました。もう一度試してください。
違反を報告
レビュー を日本語に翻訳する