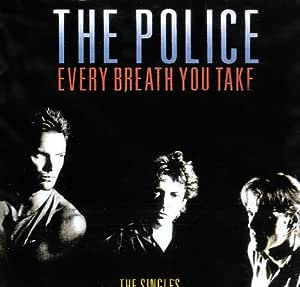 XBBX
5つ星のうち4.0 The Police - Every Breath You Take, The Singles
2020年1月5日に英国でレビュー済み
Amazonで購入
Released in 1986, this collection gathers together 13 of The Police's UK chart hits from 1978-1983. So it's a near perfect representation of the best of the band for the casual listener. And coming so early in the CD-era the mastering is excellent, unlike that of some later Police releases which have seen additional digital tamperings.

The downside....."Synchronicity 2" (a Top-20 hit from 1983) is not included. Neither is the original 1980 recording of "Don't Stand So Close To Me", instead a 1986 re-recording from an aborted reunion project is used. So that loses the final rating at least one star.

If you want all of the band's original singles (aside from their 1977 debut "Fall Out") the "Greatest Hits" compilation from 1992 is a good alternative, also with excellent sound.

In conclusion, "Every Breath You Take, The Singles" is a near perfect compilation let down by the aforementioned negative couple of setlist choices. So I'll give it a 4 star rating.

FJY
5つ星のうち5.0 Fantastic Album
2015年4月17日に英国でレビュー済み
Amazonで購入
The Police were one of the best bands around in the late 70s and early 80s, in my opinion. They made some truly fantastic songs, most of which feature on this hits CD. There is hardly a bad track on this album at all and they are all classic tracks. Walking On The Moon was one of the very first singles that I ever bought, so I have extra fond memories of that song, in particular. This album was originally released way back in 1986, so it is an old album now, but it still packs a musical punch that most of today's rubbish could learn a thing from. I played this CD all the way through and I loved all of the songs, though it is a pity that the original version of Don't Stand So Close To Me was not included (this album contains the 1986 version of this song). However, it is still a superb CD and I give it the full five stars, because it is relatively flawless. Play it and let the memories come flooding back! They really don't make 'em like this anymore.
続きを読む
4人のお客様がこれが役に立ったと考えています
役に立った
違反を報告
レビュー を日本語に翻訳する

DavyA
5つ星のうち5.0 One for the collection
2013年4月17日に英国でレビュー済み
Amazonで購入
The Police undoubtedly made some marvellous music together (and some pretty ropey stuff too). This CD offers a really enoyable and high quality over view of their single releases. I would expect if you are looking to buy this you will be more than familiar with their string of hits but for the less familiar: from "Roxanne" (I always think of Eddie Murphy in "48 Hours" when I hear that), to "Message In A Bottle" , "Every Breath You Take" and "Walking On The Moon", it's quality and enjoyment all the way. An excellent investment.
続きを読む
7人のお客様がこれが役に立ったと考えています
役に立った
違反を報告
レビュー を日本語に翻訳する

Chris Whitaker
5つ星のうち5.0 Come out with your hands above your head!
2015年6月3日に英国でレビュー済み
Amazonで購入
Takes me back to 1979 when I was 14 and mental about this group, watching my schoolmates copy the lyrics in a futile attempt at keeping a disinterested girlfriend... classic tunes, and finally "so lonely" is included.
続きを読む
3人のお客様がこれが役に立ったと考えています
役に立った
違反を報告
レビュー を日本語に翻訳する

Executioner
5つ星のうち5.0 Great Album
2019年6月16日に英国でレビュー済み
Amazonで購入
Not one bad song on it, "Don't stand so close to me" 86 is on it which is a great version of the original classic .
続きを読む
役に立った
違反を報告
レビュー を日本語に翻訳する
その他の国際レビューを読み込む

Mr. S. Rushton
5つ星のうち3.0 NOT THE BEST
2013年11月16日に英国でレビュー済み
形式: CDAmazonで購入
I loved this band when they first started out so much that i went to see them the later stuff not so good in my opinion but still a great band
続きを読む
役に立った
違反を報告
レビュー を日本語に翻訳する