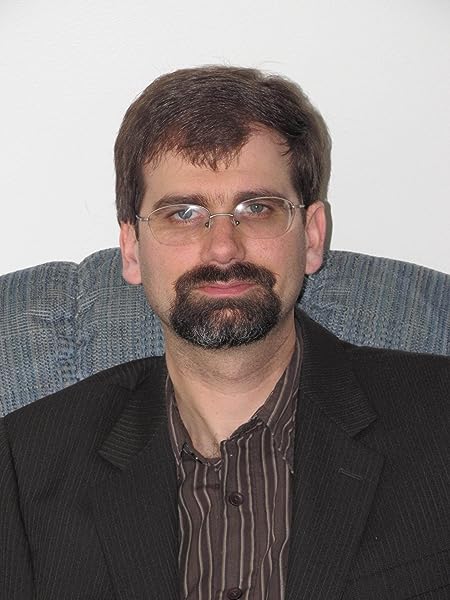 Robert B. Marks (Kingston,ON,Canada) is a professional writer and editor and EverQuest enthusiast. Although a Medievalist by education, Marks has been involved with computer games for his entire adult life (and most of his childhood). His first professional publication was a review of Myth II: Soulblighter for Computer Gaming World. Since then, Marks inaugurated the Blizzard fiction line for Pocket Books with a best-selling ebook titled Diablo: Demonsbane, has written close to 200 professionally published articles covering the Web Hosting industry, and has written an ongoing bi-weekly column titled Garwulfs Corner, which deals with computer game issues and has a readership in the tens of thousands spread across the world.
Kindle化リクエスト
このタイトルのKindle化をご希望の場合、こちらをクリックしてください。

scoundr3l
5つ星のうち1.0 There are no disclaimers to distinguish it from an official SOE product and it uses cleverly deceptive wording to make it seem l
2017年3月12日にアメリカ合衆国でレビュー済み
Amazonで購入
Not sure how many people are going to bother reading a review for a 15 year old companion book to an outdated computer game, but hopefully I can save someone the trouble of purchasing this. I was feeling nostalgic for EQ (perhaps not enough to play it) so I figured I'd at read a book on the game lore. As you can see the book is called "Everquest Companion: The inside lore of a gameworld" so you may be surprised to learn that there is no lore in this book and there's hardly even any Everquest. This is just a cheap cash grab.

The first red flag was in the subtle way they tried to replicate the look of the Everquest logo without actually using the logo. I have no problem with unofficial guides, but usually the publishers are upfront about it. Prima, for example, clearly advertises that they are the unofficial guide- hell, they're proud of it. With this book, it seems to be trying to pass itself off as the real thing as much as possible while avoiding a lawsuit. There are no disclaimers to distinguish it from an official SOE product and it uses cleverly deceptive wording to make it seem like there's some sort of authority to the guide.

The back cover says "marvel at concept art" but what it doesn't say is that the concept art appears to be random doodles created solely for the purposes of this book (presumably by bored high school students). In addition to the low quality, most of the creatures depicted are unrecognizable or alien to the world of Everquest. They lucked out with a few staples like goblins and wolves, but mostly they are using stock doodle, discards, or couldn't include any actual concept art due to copyright. That didn't stop them from plastering 2 or 3 of these large sketches randomly on every other page, often duplicates from other pages, and rarely having anything to do with the text (more on that later).

Almost any given page in this book is around 30% images. But the "concept art" becomes almost a welcome change from all the damn screenshots. Screenshots of Everquest? Not quite. For some reason, this book devotes an enormous amount of time an energy talking about things that aren't Everquest (with accompanying images), an ENORMOUS amount of time. It does so under the guise of trying to lay the foundation of how Everquest came about, but it's just transparent filler.

Here's a breakdown of the book:

Chapter 1: What is Everquest? - The author actually encourages you to straight up to skip this chapter if you're familiar with Everquest (presumably most people who bought the book). I want to disagree, because it's one of the few times the author actually discusses the game, but he does so in such a boring and monotonous way, you really wouldn't miss much. It's mostly just a boring play-by-play of him starting a new character. He does typo "run the gamut" as "run the gambit" twice. I guess that one slipped past both him and the editor (lol). Yeah, skip this chapter. Hell, skip the whole book while you're at it. Here's what else you'd miss:
Chapter 2: The Founding of the Game Genre - Here he goes over the history of fantasy, games, and the internet. This could normally be pretty interesting stuff, but he doesn't really go into much detail or tell us anything we probably haven't heard about before. It's mostly interesting because you get the feeling the author would rather be writing about anything but Everquest.
Chapter 3: The Road to Everquest - Here he goes over the history of SOE and how the game got started, but mostly talks about other games.
Chapter 4: Dissecting the MMORPG: EQ's Design Roots - Yes, a third chapter on EQ pre-history. And yes, he's still mostly talking about Ultima, Warcraft and other non-EQ games.At this point you're 80 pages into this ~200 page book and we haven't even gotten to the Everquest part. (we won't, really)
Chapter 5: Gold, Zones, Quests, and Monsters: Touring the Design of the Game World - Here are your precious 20 pages discussing the game itself. He does touch on PvP, Raids, and crafting on this chapter, but once again he seems to have reverted to talking to someone who's never played the game before (remember when he asked you to skip Chapter 1). There's nothing to take away from this chapter.
Chapter 6: Reaching out to your fellow Elf: Guilds, Forums, and Conventions - Do you know what a forum is? Ok, move along
Chapter 7: The Great Everquest Controversy - Talks about some of the scandals and suicides behind EQ. Interesting stuff, though I recommend you read about it somewhere else. I guess at this point he's given up talking about "the inner lore of the game world"
Chapter 8: Zoning Outside the PC - Talks about Everquest in the media, film talks, etc.
Chapter 9: Staring into the crystal ball: Predictions for the future - weak platitudes obligatory to the finale of a book. Meant to convey the idea that you and the author have just been on a journey together which is now sailing off into the sunset.

Bottom line (TL;DR version)- Every conceivable square inch of paper in this book is filled with images, bad art, or off-topic histories in order to stretch it out to 200 pages. I think the author must have had 3 books to write that week and saved this one for last. It's actually impressive the balls they have to call this an Everquest book. I almost recommend you check this book out if you want a chuckle. But if you're really looking for inside lore of the gameworld, get the Everquest Atlas. It's mostly maps yet somehow manages to have more content than this cheap counterfeit. Shame on this book.
続きを読む
18人のお客様がこれが役に立ったと考えています
違反を報告
レビュー を日本語に翻訳する

Karen Bryan
5つ星のうち1.0 Not really a book, more like a collection of photocopied pages.
2019年11月25日にアメリカ合衆国でレビュー済み
Amazonで購入
For the price, it was very disappointing. It was basically photocopied pages, so all of the artwork was in black and white, and poorly done at that. It's fine from a nostalgia point of view, but again, for the price listed, I can't recommend it.
続きを読む
3人のお客様がこれが役に立ったと考えています
違反を報告
レビュー を日本語に翻訳する

Bella B.
5つ星のうち5.0 Very nice book for the EQ lover
2016年12月12日にアメリカ合衆国でレビュー済み
Amazonで購入
Very nice book for the EQ lover. I bought as a Christmas prezzy for the hubby. It is something nice to be able to have and look over fondly. One thing that I saw in the product editorial was the mention of: Full color game art section inside! Which is not the case. Not a huge deal as this is not a book you're going to find just anywhere and is not the reason I bought it. I'm pretty happy to have it, I am sure he will completely love having this as an EQ fan.
続きを読む
1人のお客様がこれが役に立ったと考えています
違反を報告
レビュー を日本語に翻訳する

Howard
5つ星のうち2.0 Good content but not as advertised
2011年7月10日にアメリカ合衆国でレビュー済み
Amazonで購入
The book is well written and offers some nostalgia for former Everquest players or anyone who is interested in the early days of the MMORPG. I would give it a much higher review except for the construction of the book. The back cover displays "full color game art section inside". There may have originally been a color section but this book as it is printed now is all black and white.
続きを読む
5人のお客様がこれが役に立ったと考えています
違反を報告
レビュー を日本語に翻訳する