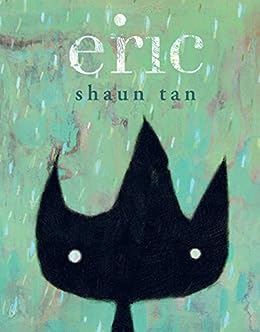 Taken from Shaun Tan's superb collection of short stories ... Eric stands out as a rare thing. ... Perfectly paced with the narrative moving effortlessly from words to pictures, this is a rare and beautifully realised story with strong crossover appeal." ― Blackwells

"Shaun Tan's Eric was originally published in a wonderful and bizarre story collection called Tales from Outer Surburbia and this is the best of the 15 stories. The everyday mundane world of urban life is brought into focus when a foreign exchange student comes to visit. While the text intimates a gentle lack of understanding of this foreigner by the narrator, the pictures emphasise the difference in culture and experience between the host and his quirky and delightful visitor. This is a lovely little book." -- Marilyn Brocklehurst ― Norfolk Children’s Book Centre

In contrast, my second choice is a small, exquisite picture book, Eric by Shaun Tan (Templar). This is the tale of a strange foreign exchange student, told from the point of view of the host family. Eric is drawn as a tiny, shadowy figure living in a world of giants. The narrator hints at the "cultural things" that divide them. This is a true picture book in that the illustrations tell as much as the words do, and is that relatively rare thing: a picture book appealing equally to both adults and children. -- Anthony Browne ― The Guardian

"an absolutely delightful little book ... such a lovely story. The beautiful illustrations encouraged my children to truly engage with the story and talk about what might be happening and what would happen next". ― Bestbear.co.uk --このテキストは、hardcover版に関連付けられています。

SHAUN TAN is an artist and author living in Melbourne, Australia. He has written and illustrated numerous acclaimed books that have enjoyed tremendous crossover appeal, including The Arrival, Tales from Outer Suburbia, Tales from the Inner City, The Red Tree and The Singing Bones, as well as picture books for children including The Rules of Summer. Shaun has worked as a theatre designer, a concept artist for Pixar and has directed a short film, The Lost Thing, which won an Academy Award. He has won many awards for both individual works and his body of work, including a World Fantasy Award for Best Artist in 2001, a Hugo Award for Best Professional Artist and the Astrid Lindgren Memorial Award, both in 2011. He has also been nominated for the prestigious Kate Greenaway Medal in the UK. --このテキストは、hardcover版に関連付けられています。

Mrs G.
5つ星のうち5.0 A little treasure of a book
2020年2月29日に英国でレビュー済み
Amazonで購入
Having thrown this in with a selection of classics and popular series books to mark my daughter's acceptance into the realm of the "free reader", I was rather judgmental of the size of the book (tiny) and volume of prose (minimal). However closer inspection revealed a charming story with a rich use of language covering extremely valuable topics. My daughter read it to me this evening and we dissected the words and subject matter. Afterwards, I re-read it to her and her younger brother (reception age) who found the amusing illustrations utterly hilarious and has declared that he shall be Eric for World Book Day 2020. Fantastic book for kids, thrilled at the purchased. I'm sure we'll get to the remaining books from the parcel later this week!
続きを読む
違反を報告
レビュー を日本語に翻訳する

Carolina
5つ星のうち5.0 Another wonderful piece of art
2020年5月14日に英国でレビュー済み
Amazonで購入
Love it love it love it!!! It is just a beautiful little book, the first time I read it tear came down my checks. Lovely story and lovely illustrations. Anyone who has started from zero in a new place will find itself reflexes in it. Another Shaun tan masterpiece.
続きを読む
違反を報告
レビュー を日本語に翻訳する

DanBeale
5つ星のうち5.0 A lovely little book
2016年1月14日に英国でレビュー済み
Amazonで購入
This little book (seriously, it's small than A5 which is surprising for a child's book) has a nice story and lovely illustrations. It's printed with a clear simple serif font. There's a reasonable amount of text, so it's not for beginning reader unless you're reading to them. This is the first Shaun Tan book I've bought, and I am going to buy others because this one is so nice.
続きを読む
違反を報告
レビュー を日本語に翻訳する

Customer
5つ星のうち5.0 Charming!
2011年12月29日に英国でレビュー済み
Amazonで購入
As with many of Shaun Tan's books this is for people of any age who like to imagine.

It's a really beautiful book with a very special ending (do not skip ahead or flick through from the end!!!). The story of Eric is part of Shaun Tan's Tales of Outer Suburbia - its complete in there. But it works wonderfully in its own little book.

This would make a lovely gift. It's guaranteed to raise a little smile!!!
続きを読む
10人のお客様がこれが役に立ったと考えています
違反を報告
レビュー を日本語に翻訳する

CarolOgi
5つ星のうち5.0 Wonderful little book to have on your shelf
2015年7月22日に英国でレビュー済み
Amazonで購入
Great little book with excellent illustrations. Shaun Tan is a genius and he's the author and illustrator for several wonderful books including "The Arrival". This book is about a little visitor and how the family he stayed with thought of him. Beautiful. It makes one appreciate things around them.
続きを読む
違反を報告
レビュー を日本語に翻訳する
すべてのレビューを参照します
トップへ戻る
Amazonについて
Amazonでビジネス
Amazonでのお支払い
ヘルプ＆ガイド
日本語ショッピングのための言語を選択します。 日本ショッピングのための国/地域を選択します。
© 1996-2020, Amazon.com, Inc. or its affiliates