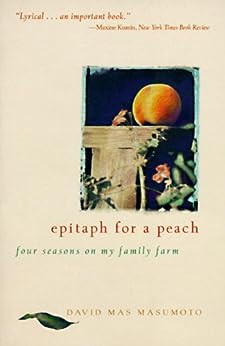 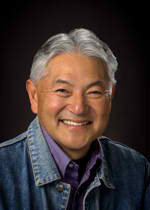 Epitaph for a Peach: Four Seasons on My Family Farm (English Edition) Kindle版

A lyrical, sensuous and thoroughly engrossing memoir of one critical year in the life of an organic peach farmer, Epitaph for a Peach is "a delightful narrative . . . with poetic flair and a sense of humor" (Library Journal). Line drawings.

An eloquent piece of nature writing by a young author with a farmer's calluses and a poet's soul, Epitaph for a Peach is about saving a peach, saving a farm, saving a family, saving a way of life--it is a story about finding "home."
--このテキストは、絶版本またはこのタイトルには設定されていない版型に関連付けられています。

“[Masumoto is] a poet of farming and peaches.” -- New York Times Book Review

“[A] wonderful writer...[Masumoto] uses his farm as Thoreau did his.” -- Los Angeles Times

“A peach of a book.” -- Publishers Weekly

“[Masumotos is] a poet of farming and peaches.” -- New York Times

“With poetic flair and a sense of humor, Masumoto offers. . . the joys and frustrations of raising peaches.” -- Library Journal --このテキストは、paperback版に関連付けられています。

This is a peach of a book, as delectable as the Sun Crest peach Masumoto is struggling to save. It is a superior variety as to taste but has a short shelf life. The author, a third-generation farmer, gives an eloquent account of one year on his farm in the California desert. He notes that grape and tree fruit farmers are deprived of an annual rite that other farmers have?planting a new crop. Peach trees are planted every 15 to 20 years; grapevines, once in a lifetime. And, according to the author, a new planting is like having another child, requiring patience and sacrifice and a resounding optimism for the future. Masumoto's book reveals his commitment to the land and his family; it is also a cogent commentary on American agriculture.
Copyright 1995 Reed Business Information, Inc. --このテキストは、kindle_edition版に関連付けられています。

David Mas Masumoto is the author of Harvest Son and Epitaph for a Peach. His organic farm is in Del Rey, California. --このテキストは、kindle_edition版に関連付けられています。
続きを読む

Ronda
5つ星のうち5.0 Great Book
2019年2月19日にアメリカ合衆国でレビュー済み
Amazonで購入
David Masumoto's writing takes you right to his farm. You can walk his rows of Sun Crest peaches and grapes where you experience the struggles of a 3rd generation Japanese American farmer as he takes you through the many emotions associated with trying to making a living growing food for others and continuing to grow a variety of peaches that does not look as pretty as newer, redder peaches. But, to David, has far superior flavor. He helps us understand why a farmer would continue to hold on even after droughts, too much rain at the wrong time, pests, lack of laborers, prices lower than the cost of production and a public that may not want it took the farmer years of expense and labor to produce.
続きを読む
3人のお客様がこれが役に立ったと考えています
違反を報告する
レビュー を日本語に翻訳する

etc
5つ星のうち4.0 I'm glad I was assigned to read this for a class
2020年8月21日にアメリカ合衆国でレビュー済み
Amazonで購入
I read this book for a class on sustainable agriculture. I am glad it was assigned to me, because I would not have read it otherwise! It was fascinating to read this from the point of view of a farmer, as it offered many interesting perspectives on farming, sustainable agriculture, and more!
続きを読む
3人のお客様がこれが役に立ったと考えています
違反を報告する
レビュー を日本語に翻訳する

V Pearce
5つ星のうち5.0 Sharing the mind and heart of a farmer
2021年7月11日にアメリカ合衆国でレビュー済み
Amazonで購入
I thoroughly enjoyed reading this book. My grandfather was a peach farmer but I was too young to know what that really meant when he died. This amazing story gave me so many insights into that way of life and made me yearn to relive those early years with my new found knowledge.
続きを読む
2人のお客様がこれが役に立ったと考えています
違反を報告する
レビュー を日本語に翻訳する

A. Ryan
5つ星のうち5.0 Not so much an epitaph, but a love letter to the land
2007年8月8日にアメリカ合衆国でレビュー済み
Amazonで購入
I feel a connection with David Masumoto. Not that I've met him or anything - in fact, there's a good chance I never will (although I keep hoping that one summer day I can make it over to his farm to pick peaches). No, this feeling is based on an impression that we have both fought the same fight over different things, for the same reasons. It is also because he writes so poignantly about a landscape I grew up in. Mr. Masumoto is an organic farmer in the valley of California, and his story is becoming more and more familiar to me as I see this way of life disappearing across the country.

A third generation Japanese American peach and grape farmer, David Masumoto inherited the family orchard from his father. He also had the heritage of his childhood memories of how that particular peach variety, Sun Crest, tasted and ran with juice unlike the pretty red baseballs that have passed for today's supermarket peach varieties. Mr. M wanted to show the world how delightful an old-fashioned peach could be.

When he took over his father's farm, he resolved to not only continue growing his Sun Crests, but to do it organically. This would prove challenging in our day and age of cheap, quick fixes; moreover, it would test his strongly felt ideals. The land needed to heal and replenish itself after years of chemical fertilizers and toxic pest control methods. Masumoto had to take his example from research on other organic farming practices, planting wildflowers to encourage beneficial insect life and sowing "green manure" crops to act as natural mulch and compost. All this took time, patience, and faith that his hard work would eventually pay off.

Epitaph for a Peach is rich in sensory descriptions, philosophy, and nostalgic flashbacks. It is a picture of the way a farmer's life is connected to the seasons, capricious weather patterns, and changing market conditions. Not incidentally, Masumoto also teaches about the obscure history of Japanese farmers in the Valley - something that even I, native to Fresno, had little idea of. Reading this book was a slow, thoughtful experience much in the same manner that one slows down to savor a rich fruit. Recommended to anybody interested in history, growing food, or the vanishing California landscape.
-Andrea, aka Merribelle
続きを読む
13人のお客様がこれが役に立ったと考えています
違反を報告する
レビュー を日本語に翻訳する
すべてのレビューを参照します
問題を報告
この商品には、不適切な内容が含まれていますか?
報告
この商品は、著作権を侵害していると思いますか?
報告
この商品には、品質または書式設定の問題が含まれていますか?
報告