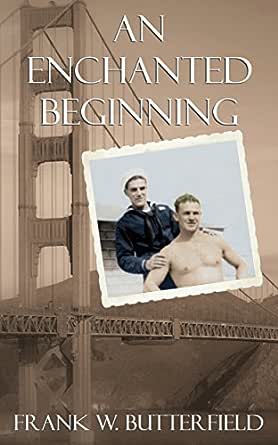 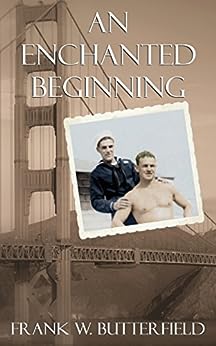 The enchanted story of an unusual romance in a very normal time.

Nick Williams, a native of the City, served in the Navy during the war. Now he lives with his lover Jeffery Klein, Esq., in Jeffery's house. He knows he needs to move on, but he can't. Not yet at least.

Carter Jones, a transplant from south Georgia, stayed home during the war. His draft board said his job as a fireman was more important. He's living with his best friend and former lover, Henry Winters, who spends most nights across the Bay in Oakland with his current beau. As hard as Carter works on his body and at his job, the lonely nights are empty.

Two handsome men in one beautiful city. Can they find each other? Across a crowded room?

An Enchanted Beginning is the complete back story of this wonderful love affair.

Starting in 1947, this book is composed of several parts that move the reader gently through an unusual love that starts during a time when everything and everyone was supposed to be getting back to normal. From 1947 through 1950 and beyond, Nick & Carter's love is anything but normal.

If you're a fan of true romance and love to see it blossom in the most unusual of times, this is the book for you.

These stories are a prequel to the Nick Williams Mystery series of books, which start in 1953 with The Unexpected Heiress.

Searlas Lochlainn
5つ星のうち5.0 Buy these books and settle in for a great read!
2017年4月4日 - (Amazon.com)
Amazonで購入
A tremendously enjoyable series with a retro feel, conjures up the '40s and '50s in San Francisco and several other places very convincingly. While there are a lot of sexual situations the author wisely avoids sliding into graphic sex. This works really well for the Private Investigator focus while not depriving us of the romantic ups and downs of life. I personally enjoyed the somewhat innocent quality that pervades the series. Husbands Nick and Carter and their employees investigate a wide variety of crimes and have some very narrow escapes - corrupt police and courts, racism, mobsters, homophobia and much more. The plots are complex and the the books are hard to put down once you start reading. There a lots of surprises and rather remarkable insight into human foibles. Right up there with the best of M/M (or any other) detective fiction, highly recommended.
続きを読む
4人のお客様がこれが役に立ったと考えています
レビュー を日本語に翻訳する

Ulysses Grant Dietz
5つ星のうち4.0 it has nothing to do with his love for Carter
2016年11月2日 - (Amazon.com)
Amazonで購入
I resisted the first two Nick and Carter Romances, but caved when Frank Butterfield came out with all five of the “back story” romances that tell the story of Nick Williams and Carter Jones up to the point of the first Nick Williams Mystery, set in 1953.

The stylized prose in these five novellas made me think of the sort of flat-footed dialogue of television’s “Dragnet” series with the deadpan detective, Joe Friday. I suppose we should think of Sam Spade, too. Somehow, this clipped, retro style helped evoke San Francisco (and Chicago, and New York) in the late 1940s. For all that Nick Williams is sort of a gay Batman (without the tragedy and costume), the story of him and Carter Woodrow Wilson Jones has a weird ring of authenticity to it. The mysteries get a little more hard-nosed, but the romances charmingly set the stage for this backward look into the bad-old-days when, in spite of everything, gay men (men who were “in the life”) did manage to find each other and build loving relationships.

Butterfield doesn’t give us anything more than suggested sex, which is not only appropriate for the time, but also forces the reader to focus on the people. The first novella begins with the crumbling of Nick’s relationship with Jeffery Klein and his meeting of the Georgia-born fireman, Carter. There is nothing big and important in any of these stories, other than a slightly edgy nostalgia, and the preparation of the setting against which the actual mysteries will take place. We get to really know Nick Williams, who by unforeseen circumstances, becomes one of the richest men in San Francisco, and without question the richest homosexual. While this enables his derring-do as a P.I., it has nothing to do with his love for Carter, which is entirely based on a bolt from the blue, love-at-first-sight kind of romantic premise. Indeed, Butterfield resorts to a whole series of adorable romance novel tropes – including buying a house and meeting the “lady couple” neighbors in the Eureka Valley neighborhood of San Francisco, which will eventually come to be known as the Castro. We learn that Nick isn’t 100% a nice guy. He’s arrogant and feisty, two things taught to him by unloving parents and years in the Navy. Carter, too, scarred by the virulent racism of his small-town Deep South childhood, is no fault-less prince. Both of these men have to consciously reject the male assumptions and prejudices of post-War America, and neither one has any role models to guide them. Nick’s ex-lover Jeffery will have his own story arc in the course of the detective novels, while his first army romance, Mack McKnight, presents a poignant figure of the archetypal gay man always yearning for, but never quite finding, happiness.

As someone born in 1955, it is fascinating to see a world that I just missed; but one in which relatives and friends of my family lived. Gay life didn’t start with Stonewall, and Butterfield’s books offer a warm and cozy vision of something few of us have ever quite understood.

silvia
5つ星のうち5.0 Loved
2019年10月23日 - (Amazon.com)
Amazonで購入
This is my fave in the series so far. I always feel that way though. I’m sure the next book I read in this beautiful romance series will be my fave too, lol. I just can’t get enough of Nick and Carter. This is a must read as it gives a foundation of the beginning of Nick and Carter. Boy, Nick has a temper, I kid you not, and Carter knows just how to tame it, son.
続きを読む
1人のお客様がこれが役に立ったと考えています
レビュー を日本語に翻訳する

Kindle Customer
5つ星のうち5.0 A very good read.
2017年1月16日 - (Amazon.com)
Amazonで購入
I really enjoy a good love story between two men. Since I am gay I already know what the sex is like. Lots of intro to sex without the lengthy descriptions of what is going on. Love it. More gay writing authors can learn from this. Can't figure out one thing though. Story took place in the late 40's ('47, '48 '49), so how come the realtor was driving a '52 Lincoln? Oh well, still a great book. On to the next one in the series.
続きを読む
2人のお客様がこれが役に立ったと考えています
レビュー を日本語に翻訳する