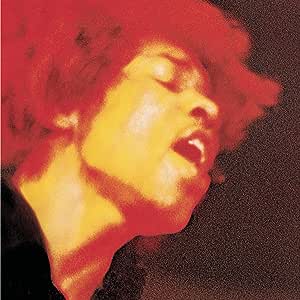 Jewelcase. Remastered edition of this 1968 album from the Rock icon. Electric Ladyland features some of Jimi's most enduring recordings including 'Crosstown Traffic', 'Voodoo Child (Slight Return)', 'All Along The Watchtower' and more.

GroovyJohn
5つ星のうち4.0 50 year ago I bought this double LP in a brown paper bag, and it blew my mind forever, but wait ?
2018年11月28日に英国でレビュー済み
Amazonで購入
This is/was my no 1 double LP for all time, and have bought many many re issues in that time.
So is this the difinitive version ? as lots of other (bands) have remixed LPs, cough... the Beatles.....
This release I think, is not for die hard fans, and priced a little high for what you get. Please note I am a massive fan of Jimi Hendrix, and fans already have good quality acoustic versions included (and not all on EL??) and the live recording is a lot better than expected (but it was recorded off the sound desk, warts and all) and nothing to do with Electric Ladyland exept it was around the same time as the first release, not when EL was recorded ??? hmm. The booklet is nice but would have preferred more in depth photos and session notes, other than lots of photos of his song handwritings. There are lots of other out takes of the songs on EL out their, but they are not on here, lots of the songs have nothing to do with EL so would have liked all this to be stripped off. However the 5.1 remix is the best i have heard EL since i bought it home in a brown paper bag over 50 years ago (for newbies the record had real naked ladies on and I would have been arrested by the police at the time) although Jimi was not happy with Track for doing this in the UK , I would have liked that option again as an extra bag cover in stead of a park shot with children that does not make me nostalgic? So to sum up another remaster with actual out takes from the original LP with perhaps a few released live versions of same would have been enough, and that great 5.1 DVD with Doc included for a lot less money.
It is really difficult being over 65, as I almost feel compelled to buy all these re mixes and re masters but that can really bite into your pension...... Ps go and see John Cambell as Are you Experienced (UK) as he will be doing EL songs in his 2 hour set, plug plug....my mind is still blown........ as the Beatles White LP never really hit the stop then or now

S. Lornie
5つ星のうち5.0 Classic!
2018年7月13日に英国でレビュー済み
Amazonで購入
Electric Ladyland is the third and final album from The Jimi Hendrix Experience. This wacky little rock album is not only one of the most far out albums in our time but one of the best rock albums to ever exist.

Thinking back to 1968, I can only imagine what was going through peoples minds when Electric Ladyland hit the shelves. Up until this point there had been nothing like this out there (that wasn't other Hendrix albums). Yes, there was some impressive players and bands playing some cracking tunes. But nothing that quite lives up to this grand scale. Nearly fifty years after the records initial release, this album is still being used as an example of intense emotional guitar playing and is still widely regarded as one of the finest listening experiences in modern music. That is quite an impressive achievement when you think about it.

Normally I do not shy away from criticising otherwise legendary albums. However this is one of those rare moments when I have nothing to mouth off about. Electric Ladyland holds some of the finest music of its time in the likes of the fifteen minute epic blues Voodoo Chile, Gypsy Eyes, Still Raining, Still Dreaming and of course the incredible Bob Dylan cover All Along The Watchtower. These songs are full of some of the most memorable musical passages in rock. Listening to the likes of Voodoo Chile (Slight Return) you can't help but just sit in awe at the immense sound coming from the guitar. The credit does not solely go to Hendrix either. As I mentioned in a previous review, the rhythm section featuring Noel Redding and Mitch Mitchell are absolutely stunning. They smash their way through every song with fierce precision, jazzy fills and so much bluesy soul. That sound, it is just beautiful.

If you are lucky enough to get your paws on the stereo version of the album, you are in for a trip. The bands instruments do not stay in the same spot through out the album. Instead you will find each instrument spinning round an audible circle. Listening to this album through head phones is a fairly out of this world experience as you hear the guitar play circles round your head only to be follow by the drums. This is some pretty spectacular studio skills and (in my opinion) it is vastly superior to the mono version I own on vinyl.

I could spend hours of my life praising an album like Electric Ladyland. This record is a timeless piece of history that I feel every rock, blues and heavy metal musician should own. You can hear so many influences on modern music on this album alone. This impressive piece of music is sadly the last we heard of Jimi Hendrix as he died not long after. I think you owe it to yourself to have this in your collection, there is no reason not to.

Sergey
5つ星のうち5.0 That Is How Albums Should Be Remastered
2017年7月24日に英国でレビュー済み
Amazonで購入
This is review of 1993 Polydor edition of Electric Ladyland.
Electric Ladyland is a must for each fan of Hendrix and lover of classic guitar rock. Elements of different subgenres of the 70s could be easily traced on this album. I wouldn't loose time to describe you different songs - there's a lot of reviews here and a lot of editions you could buy.
Why remastered edition from 1993 is superior?
It was remastered by Alan Douglas, producer who worked with Jimi in the end of his life.
I know there are a lot of listeners who like to hear raw sound of Jimi - and it's good. But there's possibility to hear his playing in detailes, as a work of impressionist artist. This edition gives this unique possibility to the listener. Since that time this version of remastering were never re-released - so use this possibilty, compare sound remastered by Alan Douglas with other editions, and make your choice.
続きを読む
7人のお客様がこれが役に立ったと考えています
役に立った
フィードバックを送信中...
フィードバックをお寄せいただきありがとうございます。
申し訳ありませんが、お客様の投票の記録に失敗しました。もう一度試してください。
違反を報告
レビュー を日本語に翻訳する

KT
5つ星のうち5.0 When Jimi caught fire
2017年1月8日に英国でレビュー済み
Amazonで購入
The 3rd and final album from 'the Jimi Hendrx Experience' is thumping. One of the great albums, from a great era. 'Electric Ladyland' is also Jimi' s last studio album. It starts to get going with 15 minute long 'Voodoo Chile', from chilled to frenetic, it's frequently brilliant. The albums final two tracks are the top picks from a glorious harvest. 'All Along the Watchtower', a Bob Dylan cover so good, it changed how Dylan himself played the song. And 'Vooddoo Chile (Slight Return)' with it's pioneering wah-wah effect. He plays guitar like a demon.
続きを読む
4人のお客様がこれが役に立ったと考えています
役に立った
フィードバックを送信中...
フィードバックをお寄せいただきありがとうございます。
申し訳ありませんが、お客様の投票の記録に失敗しました。もう一度試してください。
違反を報告
レビュー を日本語に翻訳する

peteski
5つ星のうち2.0 disappointed
2018年11月10日にドイツでレビュー済み
Amazonで購入
I was really excited to hear about a six LP expanded edition of this legendary album, however I feel rather disappointed and exploited by this release. Of course, the first two discs are the original album, which I suppose most Hendrix fans have already. The next two discs are what this release is all about and should have been released separately at a reasonable cost. The last two discs are of historical interest but are poor audible bootleg quality, and I feel that to package these all together is a rather exploitative way of exerting €100+ out of fans of a man who would have deplored this kind of behavior. Nice packaging and booklet though.
続きを読む
12人のお客様がこれが役に立ったと考えています
役に立った
フィードバックを送信中...
フィードバックをお寄せいただきありがとうございます。
申し訳ありませんが、お客様の投票の記録に失敗しました。もう一度試してください。
違反を報告
レビュー を日本語に翻訳する

MIKE ABBOTT
5つ星のうち5.0 Classic Hendrix
2013年9月9日に英国でレビュー済み
Amazonで購入
I have the original UK CD release from Polydor which mirrored the vinyl that I once had. Then the CDs wouldn't play so had to replace them. The original cover art on this issue has gone (too sexist) and so has the UK running order. This is the LP as issued in the US by Reprise back in '69 but minus the original US cover art (contact shots of Hendrix at Electric Ladyland). Classic Hendrix. Unbeatable.
続きを読む
3人のお客様がこれが役に立ったと考えています
役に立った
フィードバックを送信中...
フィードバックをお寄せいただきありがとうございます。
申し訳ありませんが、お客様の投票の記録に失敗しました。もう一度試してください。
違反を報告
レビュー を日本語に翻訳する

Amazonas
5つ星のうち5.0 Simply Astonishing
2012年10月9日に英国でレビュー済み
Amazonで購入
Jimi Hendrix just can't be over rated. He is probably the most famous single musician to have lived in the last 100 years and listening to this you understand why.

This album is completely brilliant and I just can't understand why it took me so long to get it.

It's so creative, so loose and so tight. Totally inspirational, it's incredible how amazing truly gifted humans beings can be.

Garry B Grove
5つ星のうち5.0 Mercurial Hendrix Album In A Great Package
2010年3月18日に英国でレビュー済み
Amazonで購入
What more can be said about this mercurial Jimi Hendrix Album that hasn't already been expressed already, so to refer to this package, it's truly excellent!
The twinning with an extended version of the "Making of DVD" with the benchmark album itself makes it an inspired insight into the music and how it was originally put together with great contributions from Eddie Kramer, Steve Winwood, Mitch Mitchell, Noel Redding to name but a few of the faces providing the context here.If you are planning to buy a CD copy of the album then this is the one to go for.
続きを読む
3人のお客様がこれが役に立ったと考えています
役に立った
フィードバックを送信中...
フィードバックをお寄せいただきありがとうございます。
申し訳ありませんが、お客様の投票の記録に失敗しました。もう一度試してください。
違反を報告
レビュー を日本語に翻訳する
その他の国際レビューを読み込む